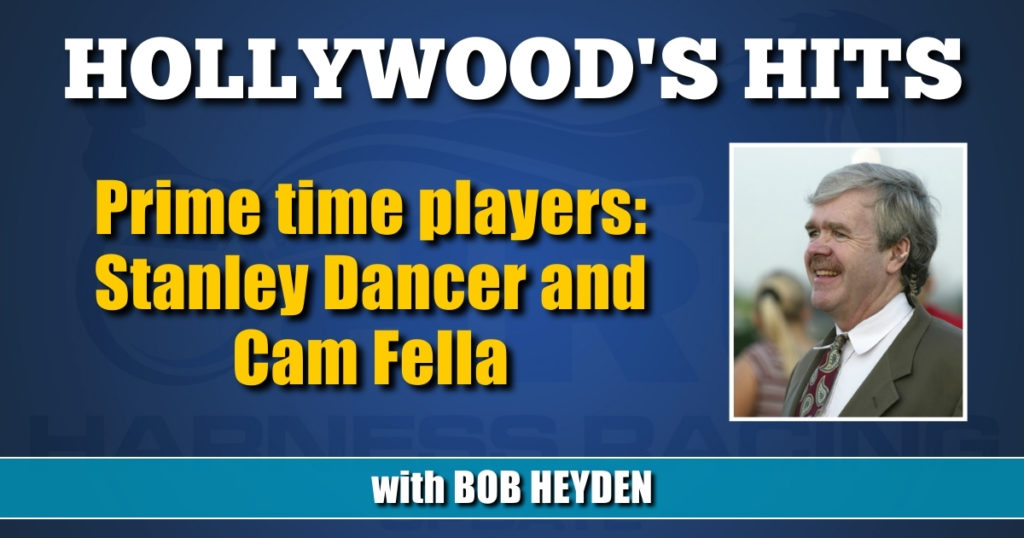 Dancer’s record of three Triple Crown wins — that he trained and drove — still stands 49 years later. Only twice since has a trainer/driver won just one Triple Crown — 1980 Clint Galbraith with Niatross and 2004 Trond Smedshammer with Windsongs Legacy.

Not only did Dancer win the Triple Crown with Nevele Pride in 1968, Most Happy Fella in 1970 and Super Bowl in 1972, he very nearly had five in that nine year span from 1968-1976. Albatross was second to Nansemond as the huge favorite to complete the 1971 Triple Crown in the Jug and Keystone Ore missed a neck of overcoming the second tier to Windshield Wiper in the 1976 Messenger.

July 25, 1983 was the date of The Match Race everyone wanted (actually it was a field of 10). It was contested on a Monday as Pat Crowe had a previous obligation on the Saturday two days before. It was the first ever matchup between Its Fritz and Cam Fella. Cam won this matchup and would take the next two, also. For those who are time crazy, consider this. Cam Fella was the easy choice in 1983 for his second straight Horse of the Year and wound up surpassing Niatross at year’s end on the all-time earnings list with $2.041 million — or 11 times what Ist Fritz earned in his entire career. Yet, Its Fritz was the fastest performer in 1983 at The Red Mile and The Meadows. He won in 1:52.1 at The Meadows on Aug. 27 and in 1:51.4 in Lexington.

Take a look at the world race record holders among the 4- and 5-year-old and older set entering the 2007 season:

4YO Mare — 1:48.4 Carolina Sunshine; granddaughter of Cam Fella by Cambest

4 YO or Older Mare — 1:48.4 Frightening P; granddaughter of Cam Fella by Camtastic

4 YO or Older Gelding — 1:46.4 world race record from 2006 Holborn Hanover a grandson of Cam Fella by Cams Card Shark

Can you top this?

I doubt it. Mark MacDonald has just won the Meadowlands Pace, his first, at age 42. If you look back to 2005, when MacDonald set the world 3YOCP world record of 1:47.4 on Oct. 1 at The Red Mile, you will see a startling stat. His first three wins in the USA were all-sub 1:50:

Thirty summers ago, Miss Easy was dominating the ladies. She never lost a Meadowlands race against the girls only (18-for-18). She wound up-in a six week period that summer of paying the minimum $2.10 five times in six tries. She would go on to set the pacing mare money mark of $1.777 million that would be topped several years later by rival Shady Daisy who, unlike Miss Easy, retired after 3 and continued on to be a super mare.

With Manchego at Plainridge today (July 25) for the $250,000 Spirit Of Massachusetts, she will try to duplicate her 2020 effort at the same track where she posted her season’s best 1:49.3. If you remember, that was the all-age track record — and Shartin N did the very same thing on the pacing side — in back-to-back races; all-time marks both lowered with 30 minutes.

This takes me back to Aug. 6, 1994, when the very same thing- — almost — happened at the Meadowlands. Beat The Wheel — who four weeks earlier, had become history’s fastest trotter at 1:51.4 beating Pine Chip no less — and Staying Together were in consecutive races. He of the 1:48.2 world record from 1993 his HOY season. Oh, they both finished off the board.

Q. Which father and son were the first to each score 1,000 driving wins?

A. Garland and Glen Garnsey. Glen completed that daily double in 1968.

Could trainer Marcus Melander have three favorites in the Hambletonian again this year?

Chuck Sylvester did them one better in 1998 with the four top choices. Muscles Yankee was the winner at $2.60, Silver Pine and Armbro Rotary were last and next to last at 4.70-1 and David Raymond was second as the fourth choice at 6.10-1.

Keep them in mind

Keep these two drivers in mind when betting the last two weeks of the Championship Meadowlands Meet and the Grand Circuit — Mark MacDonald and George Brennan.

Two-time Canadian Driver of the Year, in 2006 was second in wins in North America with 745 and fourth in earnings at $10.2 million. He picked up the drive late in the 2011 Breeders Crown series on Betterthancheddar and posted one of the greatest performances from a near impossible spot to win the 3YOCP BC. He won his first Crown in 2008 (Tim Tetrick and he both scored their first Crowns in consecutive races) from last to first with Moving Pictures. He won the Metro and NA Cup with Sportswriter in 2009-2010. That Artsplace colt is one of the only handful of pacers in history to average $100,000 per career start. He had the sport’s fastest winning drive 15 years apart in 2005 and again in 2020. The last time he drove on Hambletonian Day he won the Lady Liberty with three-time division winner Pure Country. He set the Adios record of 1:47.4 — also the world mark — in 2012 with Bolt The Duer.

Got his start in the Metro-New York area in 1994 with veteran Indianapolis. He drove both 2YO division winners in 1995 with Chippies Ruler and A Stud Named Sue for Liz Quesnel. He won both the Woodrow Wilson (A Stud Named Sue-1995) and the Meadowlands Pace (Hot Lead-1996) debuting in both. He just missed with Fit For Life by a nose in the 1998 Meadowlands Pace. He was second in the 1998 Jug. He won the 2004 and 2011 Hambletonian Oaks at $37 and $57 with Silver Springs and Bold N Fresh. He set the Meadowlands track record for 3YOCP on Hambletonian Day 2005 with American Ideal roaring past HOY Rocknroll Hanover in 1:48.1. The next year he set the all-age world record with Holborn Hanover of 1:46.4 also on Hambletonian Day. He did great work with free-for-all Shark Gesture. He took the 2006 Yonkers Trot with Glidemaster to complete the Triple Crown and HOY. He won the 2011 Hambletonian with Broad Bahn the same year he captured the Oaks.