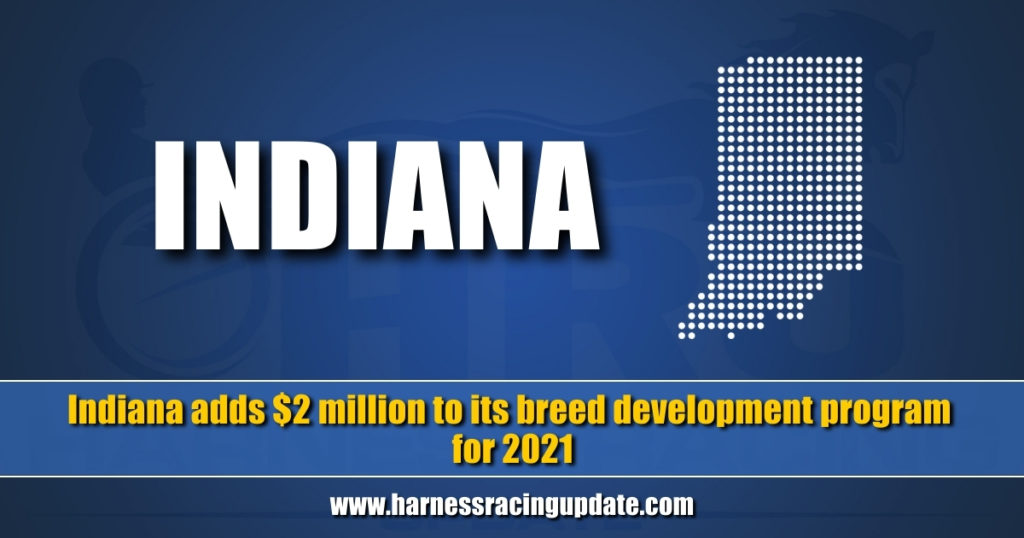 Indiana adds $2 million to its breed development program for 2021

When the Indiana Standardbred Breed Development Advisory Committee worked to craft a plan for the 2021 racing season, the members did so with a conservative approach in mind. How COVID-19 would impact business levels at the casino operating at Harrah’s Hoosier Park was unclear, making it hard to estimate just how much revenue would be allocated to the program. Now, armed with actual numbers, the committee recently amended the 2021 program, adding $2 million in new money and raising the total value of the program to $14.3 million. The plan was approved by the Indiana Horse Racing Commission (IHRC) on Thursday (July 15).

In the request submitted to the IHRC, the committee wrote: “In planning the program, all involved utilized very conservative projections for gaming adjusted gross receipts (AGR) for 2021. At this time, casino operations for the past three months have been much higher than anticipated. Deposits made through June 15, 2021 have resulted in the Standardbred Breed Development Fund receiving over $1.8 million dollars in excess of our projections.”

The program that was approved on March 2 operated on projections of $877,099 in monthly revenue generated by slots. While the actual revenue paid in January (from December business) lagged behind projections, every month since then has exceeded the mark. The deposits in April, May and June have ranged from $1.375 to $1.465 million, signaling an increase, on average, of just over $550,000 in each of the last three months.

The slots performance over the first half of 2021 prompted the committee to meet June 25 and amend the program. The group drafted a revised program that allocates an additional $2 million in money, raising it from the $12,336,000 previously approved. Of the new money, $1.7 million is earmarked for Indiana sired overnight supplements and mini series. Breeders awards will be boosted from $700,000 to $1 million with the addition of $300,000.

According to Jessica Barnes, director of racing and breed development at the IHRC, the committee worked to place the new funds where they would have the most impact. The Indiana Sires Stakes program is valued at just under $8 million this season. She pointed out there is a large segment of horses that do not fit the fair program and are not stakes caliber horses. The added money nearly doubles the amount of $2 million previously allocated that Hoosier Park can use when writing races.

“We felt like the area that needed the most support was that middle group of horses that are not stakes horses,” said Barnes. “This is how we can push the most money to that group and benefit them.”

The money directed to Indiana sired overnight supplements allows Hoosier Park’s director of racing, Scott Peine, to write races that are partially or fully paid with breed development dollars, lessening the drain on the track’s purse account. For instance, on Friday’s (July 23) program, a $10,000 event was carded for Indiana-sired freshman trotters that had yet to win in a pari-mutuel race in 2021. A $17,500 conditioned event was also included for Indiana sired 2-year-old colt trotters that excluded horses finishing first or second in the opening round of Indiana Sires Stakes competition. The $27,500 in purses for the two races were paid with breed development funds.

Barnes said that the new funding will not have an immediate impact on purses due to the nature of the fund and how it operates. She noted that typically Hoosier Park spends all the money allocated to supplements and mini series by mid-August or early September. Now, Peine will have the ability to utilize the supplements later into the meet, which traditionally concludes in November, but this year is extended into early December.

Another item of note from the July IHRC meeting is the addition of winter training at Hoosier Park once the 2021 race meeting concludes. As part of the sale agreement and final order transferring the racing permits of Hoosier Park and thoroughbred track Indiana Grand to Eldorado Resorts Inc., a provision was included that cleared the way for winter training at both facilities. However, in December 2020, ERI, with the support of the Indiana Standardbred Association (ISA), requested the requirement be waived for the 2020-2021 offseason at the Anderson track.

Prior to the July meeting, the ISA submitted a letter stating that the board of directors had voted May 3 to pursue the option of winter training. Joe Morris, Senior Vice President, Caesars Racing, submitted proposed costs of $65,000 to winterize five barns at the track. Since opening in 1994, Hoosier Park has never remained open for winter training. This season, the barn area opened Saturday, March 6 in advance of opening night on March 26.