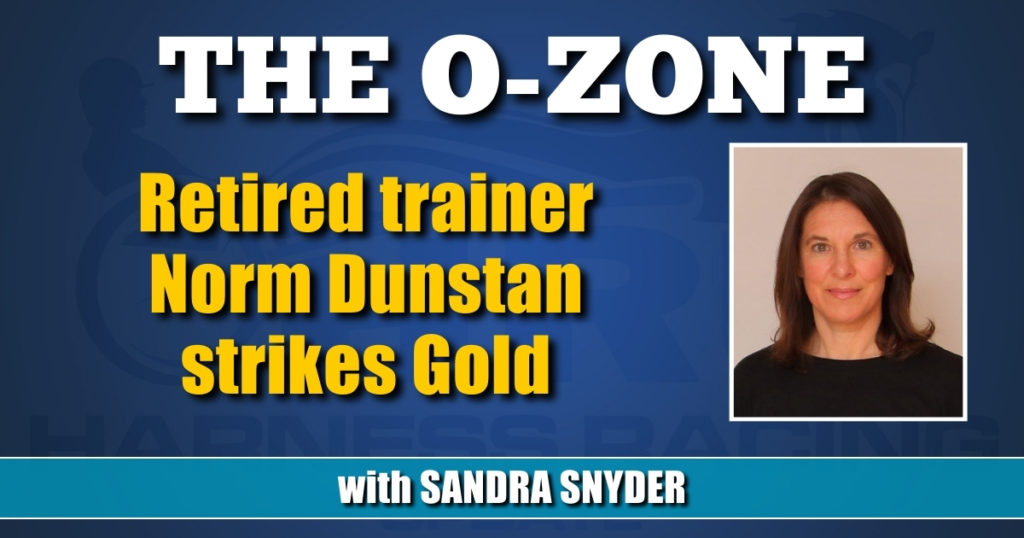 Norm Dunstan did not make it to Ottawa to see Lexus Kody win his Ontario Sires Stakes (OSS) Gold Series division on July 11, but the Caledon Village, ON resident does not expect to miss many more of the 3-year-old trotting gelding’s starts this summer.

“Watching them on TV is not the best. I like to be there to see them go,” said Dunstan. “He’s turned out to be a nice colt. He’s definitely not the top one that’s out there, but I think he’s a competitive one and gives you everything he’s got. And Trevor, you couldn’t ask for a better driver than Trevor, and Shannon, they’re good people. They look after their horses.

“Apparently he’s a love-hate horse for Trevor to train and drive. I never got into it on the hate part, I just said you handle that on your own, I don’t want to know. Just let me know when he’s in to go and I’ll go and watch him.”

Shannon and Trevor Henry train and drive Lexus Kody for Dunstan and the three share ownership of the Archangel son with David Hudson of Dallas, TX. They also share ownership of the gelding’s older half-brother Lexus Markus (Amigo Hall) who recently returned to action after an injury which saw him recuperate at Dunstan’s farm for several months before returning to the Henry’s Arthur, ON base.

“He came to the farm for relaxation and healing up and then I jogged him and trained him down into the 2:20’s and then sent him back to Trevor,” said Dunstan. “I do train some of them and I enjoy it. I’m always in the barn at six every morning still.”

Now 80, Dunstan retired five years ago from full-time training and placed his horses with the Henrys and Paul MacDonell. MacDonell currently has Lexus Markus and Lexus Kody’s younger sibling Lexus Ranger (Archangel), who has a fourth-place result from the July 15 freshman trotting colt Grassroots season opener on his resume. The brothers are out of Lexus Helios, the only horse remaining on the farm Dunstan built to house his second career.

“First of all, I was in business and then when I sold the business, retired when I was 57 years of age I think it was, I bought a farm. I think it was six days later I bought a farm. I had stalls here for 24 racehorses and then another barn for the broodmares. I guess at one time we had one assistant trainer with me and four grooms, so that kept me busy,” said Dunstan. “Why would I do that when I made enough money that I could go and buy a cottage on Lake Joseph and go and retire and never have to clean a stall in my life? That didn’t sound good. I like fishing and a cottage sounded good, and I’d had two cottages before that, but I was wanting to be with the horses, still do, still do.”

Dunstan had never trained horses before, but he was knowledgeable about their care and had owned standardbreds with his cousins Bill, Bruce and Richard Carroll. He dedicated himself to learning from his staff, catch drivers and other trainers and soon enough was making regular appearances in the Ontario Sires Stakes program with his Lexus/Lexis prefix homebreds.

“All of my horses have been named Lexus, not from the very start, but when I had eight broodmares at one time producing maybe seven babies every year I had to do something to make it easier to determine where my horses were and remember their names,” said Dunstan, who picked the Lexus tag for a very pragmatic reason. “I drove Lexus cars, liked them a lot, and I thought if my horses are as good as the car, that’s great.”

While none of the Lexus horses have gone on to million-dollar careers, many have been useful racehorses for Dunstan and other owners. Among the horseman’s favorites are Lexis Noah, named after one of his grandsons, Lexus Hall, Lexis DJ and Lexus Helios.

“When I say favorites, I mean easy to train, and they all ended up being trotters,” he said. “I love trotters, I love training them.”

“I tried to bring her back and she wasn’t coming back good enough so I kept her for a while,” said Dunstan. “I’d sold all the other broodmares that I had, hated to see them go because you get attached to them, very much so, but I kept her around and then I decided what the heck, she’s eating so I bred her.”

The move proved a wise one as all three of the mare’s offspring have made it to the races. Dunstan keeps tabs on their progress, but said he tries to be the kind of owner he would have liked to work with himself.

“I was quite willing to try and find good trainers. And you know them all after you’ve been racing with them, you know the good guys, the people that you can get along with,” he said, adding that when he decided to retire he physically handed over his license to avoid the temptation of loading one up and taking it the racetrack himself. “And I’m not a pain in the rear end to them. I’m not calling them every week to find out what’s going on, I can get most of that off of the Internet, and then I just go up from time to time and take them a case of beer.”

Dunstan’s second career has been every bit as satisfying as he expected when he purchased his farm two decades ago. The only small regret he harbours is that he made the transition a little too late to try his hand at driving.

“I never took my driver’s license, I would school them type thing, getting them ready to be qualified, but I left that up to the professionals. I would have loved to have drove, but once you get over 60 years of age I think it’s time to let the younger guys do it,” said Dunstan. “I would have loved to have done it. I was involved with sports right through high school — baseball, football — and after high school I played for the Lakeshore Bears (junior football team).”

Heading into his 81st trip around the sun, Dunstan’s competitive drive is largely satisfied by watching the trotters do their work. Sophomore Lexus Kody will be returning to Gold Series action on Aug. 9 at Woodbine Mohawk Park and freshman Lexus Ranger will be back in Grassroots action on July 31 at Hiawatha Horse Park.