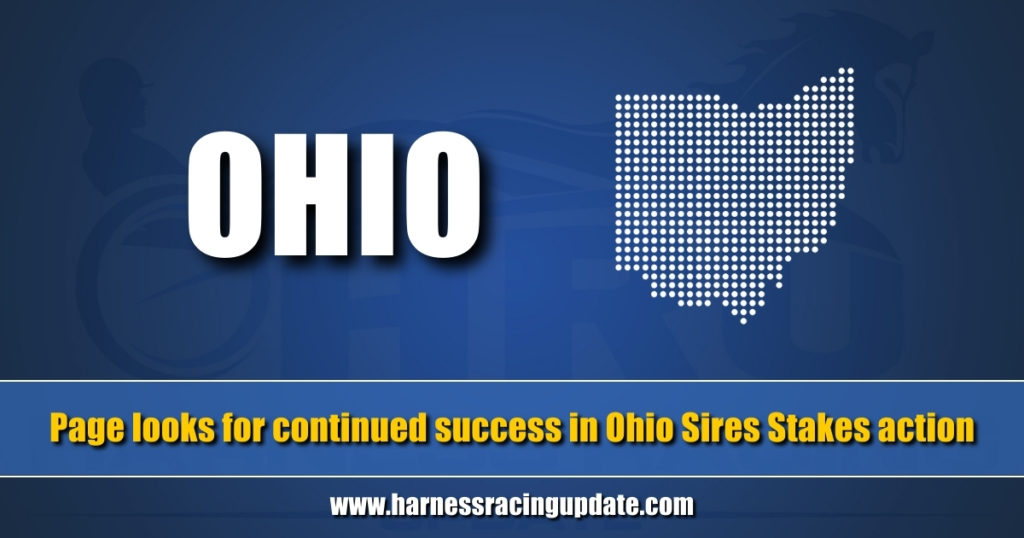 For driver Chris Page, Mt. Vernon, Ohio is special. He grew up in the county seat and made his first career start at the 2000 Knox County Fair – a sixth place finish in a $900 free-for-all pace. Plenty has changed for Page over the past two decades, including more than 5,600 career wins and nearly $50 million in earnings.

Page will miss the opening night of the 2021 Knox County Fair on Saturday night (July 24) as he will have 13 drives at Eldorado Scioto Downs, including 10 for the powerful Ron Burke Stable.

The 37-year-old reinsman will sit behind Cape Cod Hanover, the 9-5 morning line choice in the second filly split.

She is the daughter of by Downbytheseaside out of the mare Clouding Over. The 17-year-old mare has produced six $150,000 winners.

“Cape Cod’s got the ideal body type; she’s got some size to her. She looks a lot like her sire,” said Page.

Cape Cod Hanover is undefeated this season after winning a 2-year-old event at The Meadows (June 30) in 1:54.4 and the opening leg of the OHSS on July 10 at MGM Northfield Park.

In that OHSS leg, Cape Cod Hanover left from post 7 and went gate-to-wire to score a two-length win in 1:53.3.

Her second start was in the first leg of the OHSS at MGM Northfield Park on July 10. Page eased the Downbytheseaside lass of the gate, taking the lead before the three-quarter pole. Sea Silk drew off to record a 5 ¼ length win in 1:53.3.

“I went down to Florida in March and trained some of babies at Ron’s training center. I trained her down there. Her speed was never in question. She has matured – mentally and physically,” said Page, who currently sits eighth in North America with 250 wins and 12th with $3.0 million in seasonal earnings. “She’s been beautiful to drive. She loves passing horses. Her move is very methodical.”

When Page talks about the offspring of the first-year sire, Downbytheseaside, you get a little note of pride.

Page drove Downbytheseaside during the 2016 Jug Week at the Delaware County Fair when the then 2-year-old established a new world record of 1:50 over the half-mile Delaware oval.

“The Downbytheseasides are definitely going to be the X-factor in the game, not just Ohio,” said Page. “These colts and fillies will step out and race on the Grand Circuit level. I truly mean that and I wouldn’t say that if I didn’t mean it.

“Qualifying Ron’s horses over at The Meadows, we were going up against Pennsylvania and (New) Jersey breds and they have the look — the Grand Circuit look.”

Ohio has another quality first-year stallion in Fear The Dragon and it’s one of his offspring that Page is secretly excited about in the third $40,000 filly division.

Dragon Lady (Race #10; 4-1 Morning Line) rallied for a second-place finish in her career debut on June 25 at Eldorado Scioto Downs. In the first OHSS leg at Northfield, she was a half-length short of her first career score.

“Dragon’s Lady has been playing bridesmaid all season. She’s come home in quarters of :27.3 in both starts. I am not sure if the secret is out, but she’s pretty special too,” said Page.

“Ron (Burke)’s got so many good pacing fillies; it is unbelievable how many good ones he has. This is the best group of Ohio breds that Ronnie has ever had.”

Eldorado Scioto Down’s 14-race Saturday card will kick off with a 6:15 p.m. post.