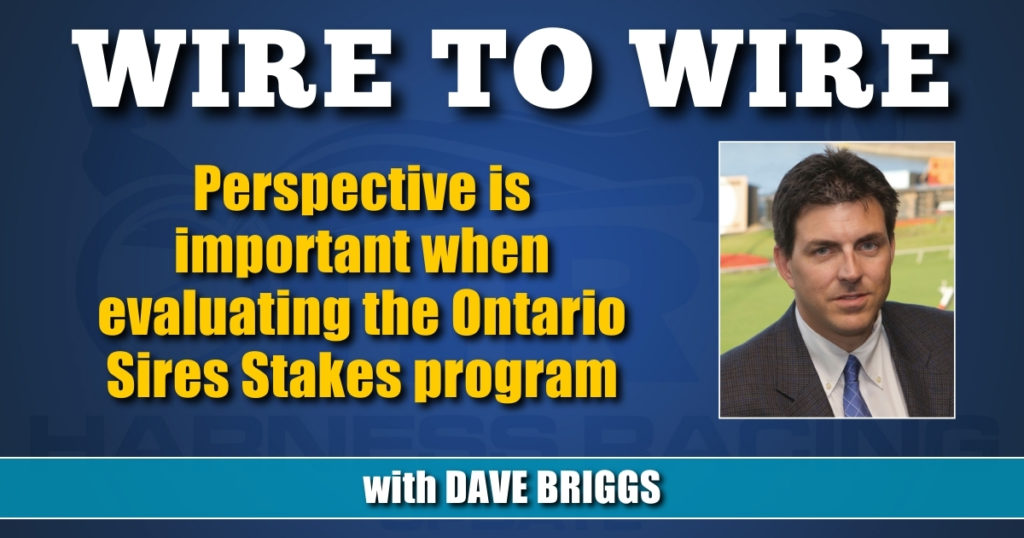 Perspective is important when evaluating the Ontario Sires Stakes program

Examining where Ontario stacks up against the likes of Pennsylvania, Ohio, New York, Indiana and others.

It always confounds me when people complain about the Ontario Sires Stakes (OSS) program. The OSS long has been one of the leading breed development programs in the sport with the proof in the quality of standardbreds Ontario produces today compared to 30 years ago. As just one example, Ontario-sired horses have won the Meadowlands Pace in each of the last three years — Best In Show in 2019, Tall Dark Stranger in 2020 and Lawless Shadow in 2021 (though that result is under appeal).

There’s no doubt the OSS is the single biggest factor in elevating the Ontario breed.

Add to that extremely low sustaining and starting fees, a plethora of opportunities to race for OSS purses at different levels and locations thanks to the province’s 12 harness tracks and the big kicker, over $14.5 million CAD (about $11.5 million USD) in total purses in 2021. That makes the OSS near the top of the list when compared to U.S. jurisdictions, even when factoring in conversion rates. This year, the Ontario program also features an additional $2.6 million in total breeding reward incentives, making the total value of the province’s Standardbred Improvement Program (SIP) more than $18 million (about $14.3 million USD).

Recently, there’s been some grumbling on social media from OSS participants about 11-horse fields and purse distribution between the Gold and Grassroots Series — which is the eternal argument between those that feel excellence should be rewarded and those that have a more socialist, spread-the-wealth view.

Perhaps said grumbling is the product of a pandemic hangover and desperation to earn as much as possible in a lockdown-shortened year; which would be understandable.

While most don’t complain about total purses, it’s never a bad idea to evaluate the value of the programs for some perspective.

My point is Ontario is certainly still among the best of them, despite the additional challenges for U.S. horsepeople due to being on the other side of an international border.

The comparison with leading jurisdictions is as follows (and please keep in mind that there have been recent fluctuations in most regions due to the COVID-19 shuttering either casinos, racing or both. Most breed development programs are funded by either casino revenue or pari-mutuel wagering impacted by pandemic closures):

By most measures, Pennsylvania is the leading jurisdiction. In 2020, over $18.4 million in purses were exclusively paid out to the connections of Pennsylvania-sired standardbreds that competed in state-restricted events. That includes over $1.9 million in purses to the Pennsylvania fairs. In 2020, Pennsylvania also had a breeders awards program worth about $2 million — which was about half of what it has been in previous years — pushing the total value of the commonwealth’s standardbred breed development program for 2020 over $20 million.

Ohio has one of the hottest sires stakes program on the continent. In 2020, the total value of the state’s breed development purses for Ohio-breds was over $18.1 million, with the largest pots coming in the Ohio Sires Stakes (nearly $7 million), the Ohio county fairs circuit (just shy of $5.5 million) and the Buckeye Stallion Series (over $3.3 million). Quite a few other stakes events restricted to Ohio-sired standardbreds, including The Next Generation and Ohio Breeders Championships, etc. also received funding from the program.

Total New York Sires Stakes (NYSS) purses for the year won’t be finalized until the end of August because its Excelsior and County Fair races depend on the number of horses entered and divisions needed. However, it is estimated the NYSS will have total purses of some $10.2 million this year. That’s down due to COVID-19. Normally, total purses in the NYSS average between $14-15 million annually. The total value of New York’s program in 2021 — counting breeders rewards and a contribution to the purses of the Empire Breeders Class stakes — is estimated to be $11.65 million.

Indiana has significantly raised its sires stakes game in recent years. It features total Indiana Sires Stakes purses of some $7.9 million in 2021 and a total breed development program of $12.6 million.

Notable, as well, is the fact the Kentucky and Massachusetts programs have advanced rapidly in recent years due to establishing dual-eligibility programs. Also, the New Jersey program has rebounded nicely in recent years and just announced it will raise purses by 20 per cent for 2022.

By comparison, the total sires stakes purses in Ontario — even when converting to U.S. dollars — likely ranks it third at some $11.5 million, behind Pennsylvania ($18.4 million) and Ohio ($18.1 million).

Considering most of the OSS purses are funded by a three per cent cut from wagering in Ontario — not government handouts or casino revenue — that’s pretty impressive, especially when you add in that in recent years the split of those wagering dollars is 55/45 in favor of the thoroughbreds. A few years ago, thoroughbred interests successfully lobbied for a higher cut of Ontario’s total Horse Improvement Program (HIP) that comes from wagering because more is bet in the province on thoroughbred racing.

That total OSS purses in 2021 have remained nearly on par with recent years in the post-Slots at Racetracks Program (SARP) era that used to fund it is a minor miracle considering total horse racing wagering in Ontario was down some $200 million in 2020 due mostly to COVID-19 lockdowns that halted racing. That meant a total deficit of some $6 million for 2021 to HIP that is shared between standardbreds, thoroughbreds and quarter horses.

“HIP is primarily funded from wagering, so if wagering is off then it creates a challenge for the program… Fortunately, we had a bit in reserve and there’s also other reserve funds that we could tap into, so we only reduced purses a little bit this year in the Sires Stakes,” said Jamie Martin, the director of racing operations for Grand River Raceway. Martin serves on the Standardbred Horse Improvement Administration Committee at Ontario Racing that determines the structure of the OSS and Ontario’s breed development programs. Also on the committee are chair Bill O’Donnell, along with Mark Horner, Jessica Buckley and Walter Parkinson.

Trainer John Bax has long been an advocate of the OSS program and served countless years on committees that helped determine its structure.

“I think we’re very fortunate that they were able to keep the Sires Stakes whole this year,” Bax said, adding there was talk of dropping Grassroots purses. Instead, divisions are regularly going for between $21,000 and $22,000, which is on par with 2020. “They were able to scrounge up the money and make it whole. I don’t know what’s going to happen for next year, but we hear this all the time.”

While even longer lockdowns in 2021 are expected to mean lower total wagering this year, which in theory will decrease OSS purses for 2022, Martin said he expects next year’s sires stakes purses to remain on par with this year.

“I am fairly optimistic that we’ll be able to maintain these purses next year,” Martin said, adding that he believes that some money can be found other places and wagering will rebound somewhat this year despite racing being halted for the much of the first half of 2021.

As for the more frequent appearance of some 11-horse fields in OSS events, which has been rare in the past, Martin said he thinks that’s more about bad luck than anything in terms of the number of entries than a conscious effort to save money by loading OSS races with more horses — i.e. 22 horses enter and Woodbine Mohawk Park finds it preferrable to have two fields of 11 rather than three fields featuring two seven-horse fields and one with eight horses.

“It’s a balance, but I think it’s just been a bad run and the numbers haven’t worked out too great for the people entering. Specifically, it’s a Grassroots issue. For the Golds, there’s no real cost difference because it’s so much per event and if it splits two or three or four ways then it just splits the purse. It’s still $190,000 total (per Gold event).

“Grassroots is different, so the Grassroots it’s per event so the more races that are run, the more money it costs us out of the Sires Stakes program so if there’s sensitivity, there’s probably more sensitivity on splitting Grassroots too small because it creates more race and, therefore, more cost.”

As for funding the Gold and Grassroots, Martin said the committee was careful to make equal cuts to both sides of the program this year, partly because the issue of where the money should be allocated has been debated for many years.

One thing most Ontario breeders and participants should agree on is that, despite imperfections, they are lucky to have such a strong sires stakes program and they should never forget the importance of being customer-conscious in providing a bettable product to help drive wagering to keep the OSS strong.