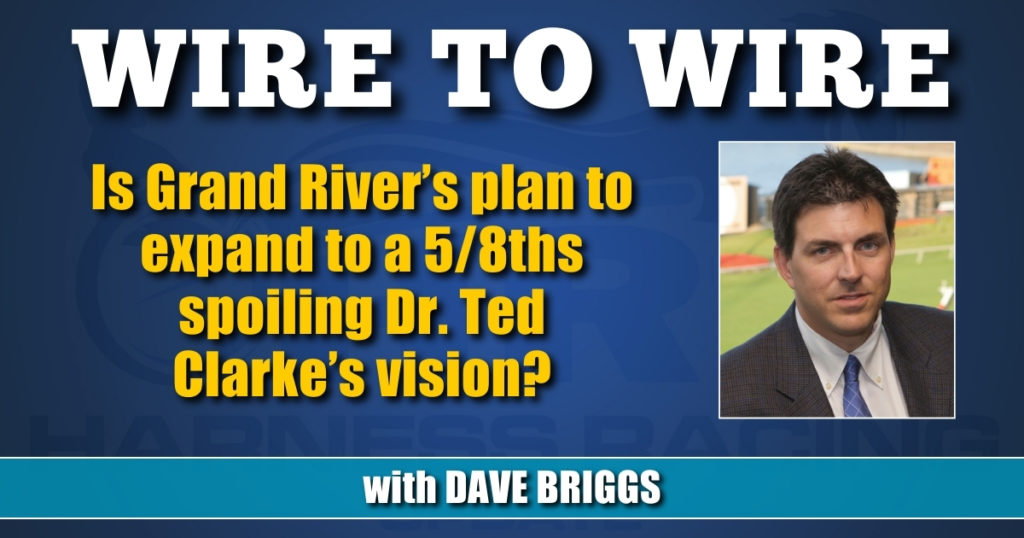 Not exactly. In fact, the late Hall of Famer planned for the possibility all along.

Those that knew the man most responsible for building Grand River Raceway in Elora, ON likely knew the late Hall of Famer Dr. Ted Clarke was particularly passionate about making it a half-mile track despite the track being built just 19 years ago in a time when smaller tracks were already considered passé. What people might not know is that despite deciding against constructing a five-eighths mile track in the first place, Clarke was enough of a visionary to not only draw up plans for the larger oval, but also have other contingency plans for the possibility of future expansion.

Early in the track’s existence, Grand River sold off a piece of land to a prominent Canadian grocery store chain, but “actually saved a little carve out of that property to allow for the five-eighths track designed by Ted,” said Jamie Martin, who succeeded Clarke as the track’s director of operations.

Now Martin is moving forward with a plan to expand Grand River to a five-eighths.

“Ted did have five-eighths designs originally, so we have it. We’ve dusted it off… and what we’re doing this year is going through the due diligence of making sure it works and getting approved by the municipality. It shouldn’t be an issue… we do have Ontario Racing and OLG (Ontario Lottery and Gaming) fund support for the project,” Martin said of the construction estimated to cost $2 million and be completed in time for the start of the 2023 season.

“I’m pretty sure we’re going to do it, but there could be a hiccup that we don’t anticipate,” Martin said. “I’m pretty sure we’ll finish the planning process probably by October and have everything approved by then, from a municipal construction aspect. There’s always been water issues up here and so forth… We would construct next year, so we would be able to open in 2023. We couldn’t do much over the winter, I don’t think, so we couldn’t get ready for opening in May of next year. The main stretch would be the only piece that would be consistent between the two tracks and so we could tie that together after next year’s racing.”

Martin said expanding the track would simply be better both for horses and for driving handle by putting more post positions in play for bettors.

“(Clarke) may have not wanted to put in a five-eighths, and I think we know he didn’t, but he did account for it one day,” Martin said. “I don’t know if he’d do it today, but… for me, Ontario Racing and OLG are making lots of infrastructure investments in tracks. I’m not sure too many of them have the potential to generate more revenue, but this one does.

“Every track has made improvements because of the $6 million dollars a year that goes to all the tracks except for Woodbine and Mohawk. We’ve all taken advantage of it. Most tracks have new starting gates. (High definition) video equipment is a good example… A lot of those investments went to fixing roofs and things like that, and that’s important, too, but that doesn’t really generate any additional revenue for the industry.”

Clarke’s chief arguments for making it a half-mile track in the first place was that it better served the grassroots side of the industry both by allowing fans to get close to the horses and by dissuading larger stables from coming to race for money designed to go to smaller stables.

But Martin said a half-mile track also dissuades many stables from racing at Grand River and puts too many outside post positions out of considering for bettors.

“I do think half-mile track racing is from another time. There’s going to be lots of halves still around, but I think if we have the chance to put in a bigger track, we should. So, we’re pursuing it,” Martin said.

Besides, Martin points out that the track’s leading trainer in 2020 was eight-time Canadian Trainer of the Year Richard Moreau. The fact Grand River has a half-mile oval isn’t dissuading the bigger operations from racing there any longer.

Meaning Dr. Ted Clarke likely isn’t rolling over in his grave and would most likely approve.