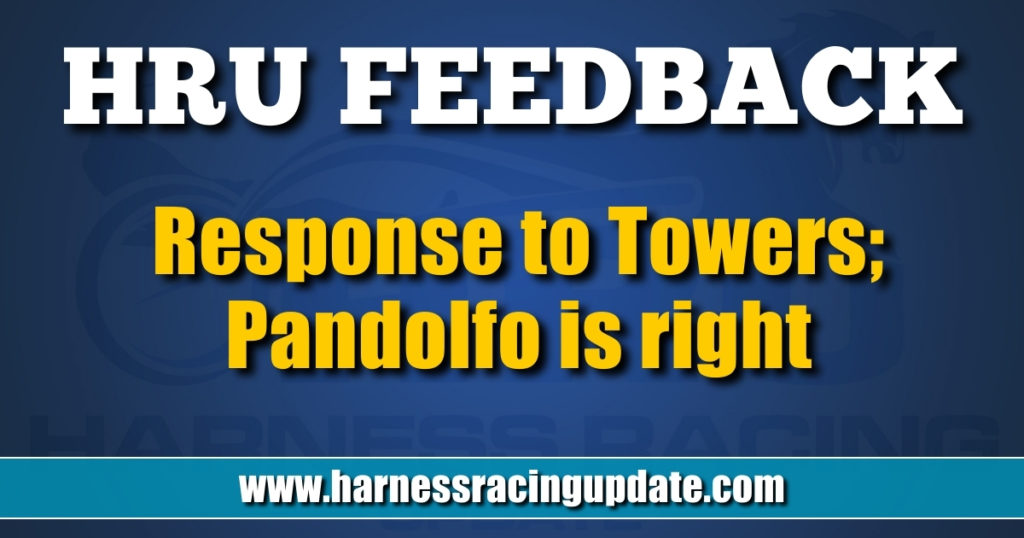 This letter pertains to your article “The ‘wait until next week’ harness racing culture needs to go.” (full story here). My perspective how to “improve the product” concerns overnight races, not stakes.

In the article, you wrote that “The reason some drivers (and trainers) don’t put forth an honest effort in a given week is because they choose not to.” WHY? What reason could a trainer, owner or driver of an overnight horse have to not put forth a 100 per cent effort to win every time they race? If we understand the motivation then perhaps we can try to address this.

The first problem to address is the current classification system used at the majority of tracks.

In non-winners of money races, losing horses are rewarded by getting to drop class and race easier horses, so there exists incentive to “manage” your horse until you race easier competition. Winning horses are forced to race above the level they earned the money at, sometimes for 3-4-5 weeks. In non-winners of X races, horses may be “managed” to stay in a lucrative class, such as “non-winners of 8 races life” if the purse is high and they can bank satisfactory earnings by finishing 2nd or 3rd weekly.

Those are possible reasons why an owner/trainer/driver could be satisfied by an effort other than what aligns and is connected to a bettor’s desire to see the horse they wagered on give a 100 per cent effort to win. I think we all agree that bettors deserve 100 per cent effort and that’s what our “product” should be.

We should examine changing the classification system. Reward the behavior you want to see. Find other ways to group horses that align the interests of owners, trainers, drivers and bettors.

How? Today, I suggest using the TrackMaster ratings for aged horses. Let the race secretary create races matching horses of similar ratings. This past weekend The Meadowlands expanded its use of TrackMaster ratings for a few races for aged pacers and aged mare pacers and the races were evenly matched. In the 4 TM ratings races on Friday, (races 8,9,12,13) exactly zero favorites won. Bettors and owners, trainers and drivers should like those races. Let’s try to put 10 horses on the gait that are all of equal current ability in every race.

There are also modifications possible to Non-winners of X races classes if one is willing to examine those races.

After months of not responding to Feedback here it’s been two weeks in a row. I have to totally agree with Bob Pandolfo’s Feedback, Modern sulkies have greatly damaged the sport (2021-07-11 Feedback). Bob has covered the sport with Harness Eye and written numerous books throughout his career and has always given his readers his observed opinion which is food for thought and isn’t that what a good writer’s objective should be to strive to capture his audience. Bob has always been totally immersed in harness racing and it’s not because he is a friend but someone who has watched more racing than many his observations and thoughts shouldn’t be taken lightly.

As he said back when the tracks were full on a nightly basis the racing was far better and his mention of drivers sitting upright and close to the horse you would almost think the driver was hugging the horses rear. Today’s horizontal drivers who up until recently when the whipping rules came in would lay flat out and would be flailing away and that was driving a horse. Today the sport has no idea as to why the sport is in such disarray and is in regression with the public and that is their fault. We have the provincial and state governments who washed their hands of racing, sure there are racing commissions but in name only but they also look after gaming and alcohol so you figure it out which is at the back of the bus.

Racing today has so many associations with their own agendas and it is nothing more than their way of funding or legitimizing their existence, nothing changes in racing. The need for survival is to centralize all racing authority under one roof with one harness, thoroughbred and quarter horse racing commissioners and they would fall under one high commissioner who deals out the punishment to those who until now have done what they want. Racing is in a very precarious position walking a tightrope and one wrong move and down it will go and this is because they failed to improve and build on its popularity of years ago and now they are scrambling to survive with yet again another authority HISA and as sure as the sun will come up there will be huge mistakes and then all the other factions will say, “See, we told you so.” Racing like a business is only successful with a solid income stream, produce the best product possible and the revenue will be there. Thinking you can’t improve your product and think you have done your best will lead to the sheriff putting the locks on the door.