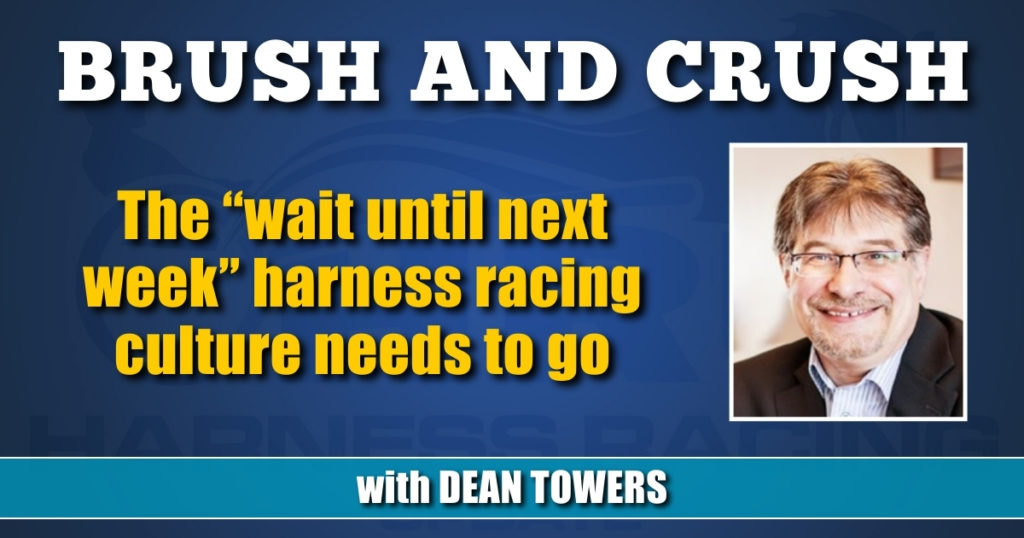 The “wait until next week” harness racing culture needs to go

As a bettor and customer, I have a few important asks of the industry and its participants.

On Friday (July 9), the Meadowlands released a note that there would be drivers meeting on July 16. The gist of it appears to be the perceived lack of competitive racing at the Jersey oval.

“I’d like to talk about how we might improve the product, especially considering we are going to show some of the races on national TV (America’s Day at The Races on Fox Sports 2) on Pace night,” said Meadowlands president Jeff Gural. “The idea is to do some things differently, evaluate the results during the break between the Hambletonian and when we reopen on Sept. 3 and decide if in fact these changes helped or hurt.”

Although I believe the Big M is pretty decent when it comes to contentious races, they certainly have had their share of snoozers. When Dovescry getting a :58 half and 1:27.3 three-quarters in the Miss Versatility caused much chatter. One of the Graduate legs equally so, with one friend “chucking his keyboard” (in 2021 people throw keyboards instead of programs I guess) because of a passive steer.

The lack of competitiveness has been a complaint from Joe Public for some time. In response, the sport often talks about speed bikes, frail horses, or too much week to week purse money as the reason for some of these sleepy races; the races that at times look more like qualifiers.

But let’s be honest and blunt. The reason some drivers (and trainers) don’t put forth an honest effort in a given week is because they choose not to. They’re the ones who choose to sit; they make the decision to take the week off. They give a hole when they have no interest in mixing it up.

As a bettor and customer, I have a few asks of the industry and its participants.

• To drivers, if your horse is a contender and is well bet, the responsibility is on you to put the horse into the race. This is the expectation of the betting public. They’re betting you tonight, not for next week.

• To trainers, if your well-bet contender is taking a week off from racing – to be buried to braven up, to be taken to the back and brushed at the finish in preparation for next week – don’t enter. Do this at the farm or in a qualifier where people are not wagering their hard-earned money.

• To the judges, if a 4-5 shot is taken back to last, a 3-5 shot doesn’t pull a two hole or sits third in slow fractions (and other little-effort scenarios, like passively opening a hole for no strategic reason) the connections should be called up. There are rules written to prevent this from happening. They need to be enforced.

I fully realize the above items are considered heresy by some factions of the sport, and I know they will elicit condemnation. It shouldn’t. They’re basic planks of any game or sport; even more so in one that derives purses from over $2 billion in wagering handle each year.

In a 1998 study, Piron & Smith concluded that it’s racing’s job to “bring together horses and purse money in a way to encourage people to bet on those horses,” and to maximize this purse money, there should be a goal to create competitive races that, “in a perfectly handicapped race, all horses would finish in a dead heat.”

That can’t happen the way many races unfold today. And it needs to be addressed.