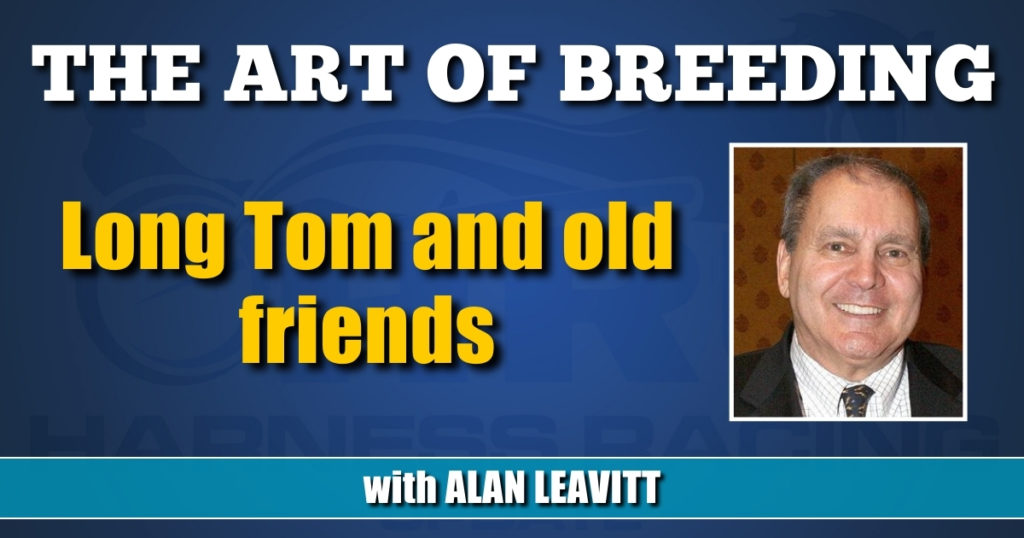 One of my oldest and smartest friends, Steve Katz, suggested I take a look at Long Tom’s pedigree, so I did.

Long Tom, for the record, is a 7-year-old stallion who earned $410,512 at 2 and 3 and won some stakes both years. His first crop is now racing at 2. He’s by Muscle Hill, and out of Ilia, by Windsong’s Legacy, and therein lies the plot of this caper, as we say in the detective trade.

For starters, Long Tom is 4 x 5 x 5 to Yankee Duchess, who was Charlie Keller’s foundation trotting mare. But of much more significance, Windsong’s Legacy, the sire of Ilia, Long Tom’s dam, is a half-sister to Ilia’s second dam, making Ilia 3 x 3 to Yankee Scottie.

I know this is starting to sound like something from the great song of my youth “I’m My Own Grandpa,” but it gives us an important clue into knowing why Ilia is such a great producer. Which she is. From four foals of racing age older than 2, she has three that have earned, respectively, $625,074, $506,887 and $410,513.

They are all three by different sires, and I question whether there is another trotting dam today who can equal her production. It is no surprise that her yearling brought $400,000 last fall at Harrisburg. Ilia is clearly a mare with a genetic deck that probably starts with a Jack, and goes up from there. Which means she is going to always throw a very high card for her half of the genetic makeup no matter whom she’s bred to. Obviously her mates only have to throw a medium range card, possibly an eight, for the average to come out high enough to result in a stakes winning trotter.

In an earlier piece, it was mentioned that there is a breeding concept of giving back to a sire the best blood of his dam. That was a concept of my Italian friend, the great breeder Federico Tesio, and Ilia is a prime example of that.

Muscle Hill, the leading trotting sire of the present day, has a pedigree that is drenched in the blood of the family Charlie Keller created. Both lines in Ilia’s pedigree are likewise Charlie Keller’s creations, although this kid does take a little credit for the tail-male line of Windsong’s Legacy. Tail-male, as you may not remember, is the top sire line in a horse’s pedigree.

All of this supports this kid’s belief that is you want breeding pyrotechnics, inbreeding is the way you get it. And as a final note about Ilia, I was delighted to learn that she’s owned by another of my oldest and dearest friends, Pete Spears. Congrats, Pete. It couldn’t happen to a better, or nicer, guy.

With the racing season now in full bloom, I find myself remembering some of the great friendships I’ve enjoyed over the years with a number of trainers who have had horses for me. Some are gone now, others, such as Bob Stewart, Bob McIntosh, Brett Pelling, and Randy Jerrell, are still practicing their trade at a high level and doing fine.

Of those in the past, I learned the most important life lessons from Curly Smart and ‘The Boss’ Howard Beissinger. Curly, who looked in a way like one of the Seven Little Dwarves, the happy one, was a great trainer and driver, with wonderful stories from a time now long gone by.

In his driving days, before the breathalyzer was invented, Curly was in great demand during the Red Mile fall meeting as a time trial driver.

“It was a little nippy this one morning, so Monty Moncreif and I had a couple of sips before we got started time trialing. So we got over to the half with the first one, and I yelled over to Monty, who had the prompter, ‘How fast did we get over here?’”

Curly stopped for a moment to smile at the memory, and then he said to me, “Monty yelled back, ‘I thought you had the watch.’

“But,” he finished the story, “We still put two minutes on six of them that morning.”

I also learned from Curly that there were a tremendous number of people named, “Bub.”

That one I haven’t put into much practice, but the most important one he taught me I use almost every day. As Curly said, from the depth of his wisdom, “You have to know when the race is over, Bub.”

Howard, the Boss to me, was an equally great trainer and driver, although he probably didn’t drink as much in a year as Curly and I could put away in one night at his kitchen table.

The Boss had a metal working shop in his basement, and he told me, “I always sharpen my tools before I put them away.”

So simple, and yet so smart. It’s a principle I’ve tried to apply all my life. But the most important thing The Boss taught me was that “people never change.”

That has stood me in such a good stead ever since he said it to me, and it has a universal application. So, if you didn’t know it before, you know it now and if you’re smart, you’ll never forget it.

Curly and The Boss are both gone now, and as Frances McDormand said in Nomadland, “I’ll see you both down the road.”