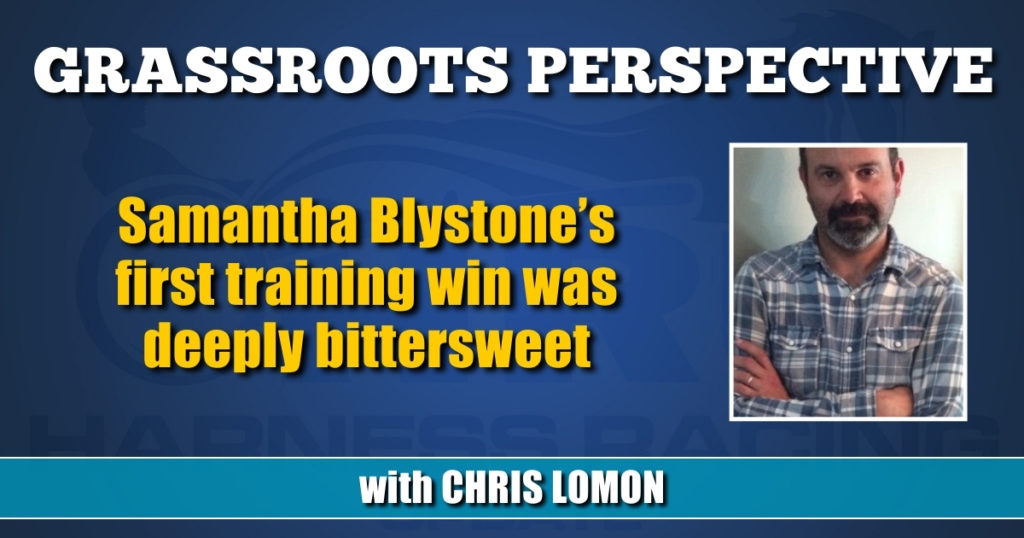 Joy. Sadness. Hope. Resilience. Samantha Blystone’s first career training win was as emotional as it gets.

The toteboard and bettors certainly felt Startin Something, a 9-year-old gelded son of Rockin Image (IN), had a huge shot at taking all the spoils in the 11th race at The Meadows on the night of March 4.

Sent on his way as the 6-5 choice, the veteran pacer, contesting his 188th career race, collared the leader late to eke out a neck win in 1:54.4 with Tony Hall in the race bike.

“We bought this horse for $7,000 from a friend of ours,” said Blystone. “I put him in a claimer and he was just amazing. I wasn’t really expecting a win I really thought we might get third, but he dug in and got there. I was really happy.”

The thrill of recording her first training triumph was short-lived.

“Unfortunately, he broke down after that start. It’s very upsetting. Obviously, you are very happy to get that first win, but it’s a horrible feeling when you have a horse break down. He gave his all in that race. Chris Gooden posted a photo of Tony and I with the horse after the race, and I got a lot of texts and phone calls congratulating me. I look back on that night and it felt more like a dream. And then afterwards, it felt like a nightmare. It was such a strange mix of emotions. When I got the call the next morning about Startin Something, that’s why I didn’t enjoy my first win so much. It was tough to hear that.”

Blystone has been able to enjoy other drama-free victories since then.

The native of Clarksville, PA, has high praise for the 17 horses that comprise her barn, including Hurrikane Lori Ann.

A 5-year-old daughter of Lis Mara, the bay, bred by Our Horse Cents Stable, earned her lifetime speed badge on April 28 at The Meadows.

“There have been some really nice moments so far. I took care of Hurrikane Lori Ann for [trainer] Mike Palone when I was working for him. That owner followed me over – it was amicable between Mike and myself – and he gave me some opportunities, including with this horse. I knew she was fast. She would go in 1:54, but I felt she had more speed to offer. She ended up pacing in 1:51.4., and became my open mare. She’s been trying her heart out every time. I tell people that she has the tiniest little legs, but the biggest heart on earth. She probably stands 14 hands, so she’s very pony-sized in her look. But when she gets out there, she shows that size doesn’t matter.”

Another star for Blystone comes in the form of Ben Rockin, a 5-year-old son of A Rocknroll Dance owned by Collin and JR Ryan.

“I gave him a chance to see if he could do better than his previous-best mark and he did, going in 1:50.4 [a one-length score on May 22, at The Meadows]. I’m still waiting to see if he has something more. I really think he hasn’t come near his full potential yet.”

In spite of her outstanding rookie numbers, Blystone, who points to Bicorne Hanover as her “hardest-trying horse,” would apply that same thought to herself.

She’s quick to heap praise on her pacers and trotters for helping her get off to a strong start.

“I couldn’t ask for a better group of horses. They all try so hard and I’m just thankful I have the horses I do to start off my career. I’m very busy, but I love it. I might say I’m tired and that I don’t have much time at all for myself, but I am so happy to be in the position I am.”

That she has found a career in standardbred racing is no longshot.

Blystone has been around horses, horsepeople and horse racing her entire life.

“I was born into the business. I grew up around the barn. I actually started out with my grandparents, John and Beulah Bigley. They taught me everything. They owned, bred and trained – they did it all themselves. I spent a lot of time in Doug Snyder’s barn as a kid. I got a crash course in racing before I even knew what I was doing. After that, I groomed for about 10 different trainers. One trainer I got to do a lot more than I ever had was Mike Palone. He showed me that I could do it by myself and that I should get my trainer’s license. That faith he had in me really helped me. He wasn’t happy that I was leaving, but he was happy to see what I could do. That means a lot.”

One particular piece of advice from her grandfather has become more meaningful as Blystone’s career evolved.

Blystone has also learned a lot about herself in her relatively short time as a trainer, most importantly, having faith in her abilities.

That, she will tell you, is still a work in progress.

But she’s starting to see the finish line.

“Honestly, I didn’t expect it to be this good at all. I was just hoping it would be this good. I am still waiting for the other shoe to drop. I really hope it’s not just beginner’s luck. That’s kind of how I still feel, but I’m getting closer to feeling a little bit of confidence in myself. And that makes me really happy.”