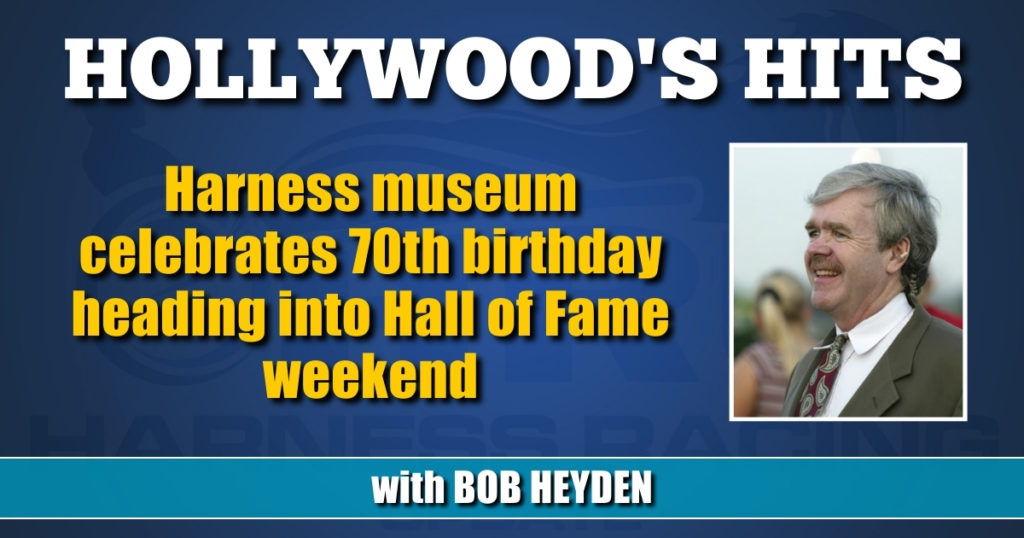 The museum, which opened on June 30, 1951, will play host to the 2020 Hall of Fame inductees’ ceremony on Sunday evening.

The Harness Racing Museum and Hall Of Fame in Goshen, NY celebrated the 70th anniversary of its opening on Wednesday (June 30), four days before the 2020 class of Hall of Fame inductees will be officially enshrined. The museum was established in 1949, but officially opened to the public on June 30, 1951.

One of the great places to visit, let’s take a look at some of the standouts — and standout numbers attached to — the Hall of Fame, the best of all institutions in standardbred racing.

2. Speaking of Filion, he was 35 when he was inducted, making him the youngest ever enshrined to that point. At the time, he was the only member of the 5,000 win club. He won nearly 70 per cent of his lifetime races after being enshrined.

5. Has there ever been a horse born who had it better than Savoir? He retired after 1978 with earnings of $1,365,140 after a career from 1971-1978. That money total was number one all-time among North America-bred trotters. He even got a single vote in 1978 for older trotters in a division won by Green Speed. Savoir was the 1975 Horse of the Year (HOY) and 1971 Hambletonian runner-up. The secret? All four of his trainers were Hall of Famers —James Arthur, Del Insko, John Chapman and Billy Haughton.

6. From 1968-1972 all 11 Hall of Fame inductees were trainer/drivers. As a matter of fact, the first time an inductee was listed as only a “driver” was Campbell in 1990. Even Buddy Gilmour was listed as both the year prior.

9. Greatest class? Can anyone top 1968 when Billy Haughton, Frank Ervin and Del Miller were inducted?

10. And finally, the best for last. How about a vote for the most decorated, colorful, full lifetime award to Bi Shively who went in in 1967. Can anyone match his record — in any sport — for being battle tested? Born in 1878, 13 years after the Civil War, Shively was a soldier during the 1898 Spanish-American War. He was training horses during WW I and WW II (after dreams of being a jockey had long since been squelched). Shively trained HOY Rodney in 1948 (a 1:58 world record performer), three years after WW II ended and two years before the Korean War began. Shively won the Hambletonian at age 74 with Sharp Note during the Korean War. He retired at the end of the 1950s during the infancy of the Vietnam War and was inducted into the Hall Of Fame in 1967 at the height of the Vietnam War. Shively died at age 91 in February, 1970 with the Vietnam War still several years away from completion.

I had a recent chat with a half dozen bettors who wager two or three times a month and are Saturday afternoon types who stay over for the nighttime card if they are winning. The following is a summary of their likes and dislikes:

1. Bathrooms. What on earth is the excuse for not having workable rest rooms?

2. Readable graphics. Chances are that the casual player is not spending much time reading graphics. They want to hear the changes.

5. Air conditioning. Yes, put it on. Now. If someone wants to roast in July they can go sit on the curb.

8. If anyone gaps from post 1 for the first eighth and allows 4-5 charity seats — fine or suspension. Tough to handicap when the entire race complexion changes due to either an unfit horse or incompetence.

10. MPH? What? Why is this on the screen? Clutter. Any track that puts up MPH is suffering an instant credibility issue. Really? Have you ever once heard someone talking to someone after a fast race or a fast half and not referred to fractions but instead MPH? Of course not.

12. Magnifying glasses supplied at tracks. Years ago they had binoculars that could be rented at thoroughbred tracks. With the average age 65 and likely climbing, have a couple dozen available. Free, too.

13. Scratches. Absolutely nothing destroys the momentum of a betting card — and most especially for those who did their work well in advance — than scratches. Of course, some are unavoidable. But please, please, please do not think about entering your horse if you might not race or if he/she is unfit or on the fence. Remember, that person sitting there with $250 in his pocket waiting for the first at Monmouth or Santa Anita has options. Scratches and LATE scratches are a major turnoff.

14. Elimination racing? Boring you say? The top five make it and it’s only a seven-horse field? Okay, then write in the conditions that there is 5 per cent or even 10 per cent bonus to that horse who wins the elim and the final. It is not only an enticement to do both — it is a detriment not to try and do so.

15. Carryovers, guarantees — put these in bold type on the TV screens. Many people playing Woodbine are not following the west coast, but they might if they see a big carryover into Sunday. Especially if the bet is an added one, or a new one. A Pick-7 for the Breeders’ Cup back when they raced only seven for instance. Loud and clear.