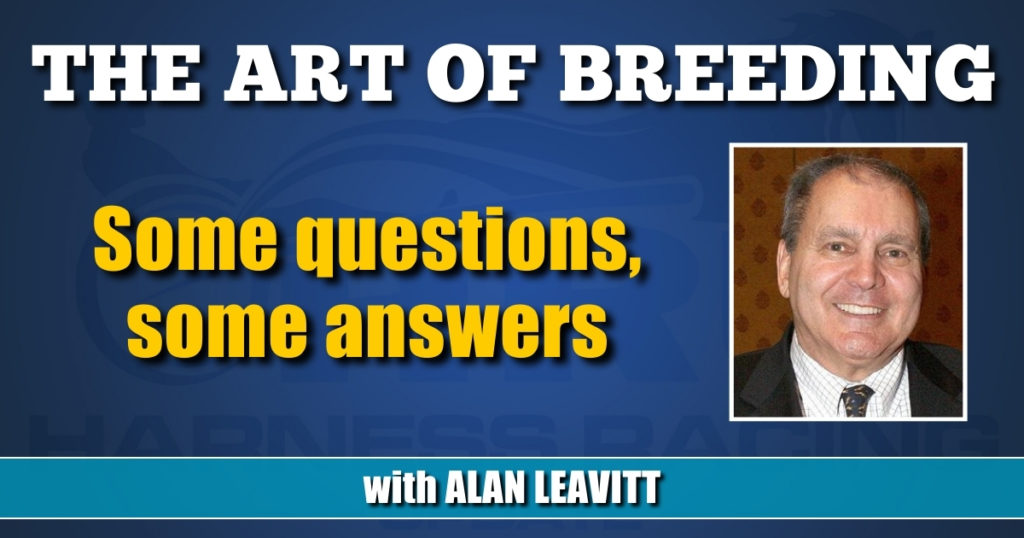 Some questions, some answers

Several interesting questions to be answered this week. Robert Lindstrom, one of the smartest men in the horse biz both in Sweden and everywhere else, as well, was concerned about the loss of the natural selection process of the sperm cell in ICSI’s. As he said, in the natural reproductive process, of all the millions of sperm cells ejaculated by the covering stallion, only one cell is strong enough to make the long journey to the egg, or oocyte, and affect conception.

So, I referred the question to Dr. Rob Foss, who operates the Equine Medical Services Clinic, in Columbia, MO, where all the Walnut Hall Ltd. ICSI’s are done. His answer was that he closely examines all the sperm cells that are delivered for each individual procedure, and he selects the one that shows the most speed and activity.

Perhaps because I’ve been watching the track and swimming trials for the Olympics, in my mind I see Dr. Foss with a starter’s pistol in his hand, about to send on their way a huge field of sperm cells, each one vying to be the winner who gets to fertilize the oocyte. On your mark! Get set!! Go!!!

I should also mention that this same smart question was also raised by Ivar Hyngstrom in a letter to HRU on June 13 (2021-06-13 Feedback). Obviously Mr. Hyngstrom really knows his stuff when it comes to equine reproduction. I hope he’ll continue to comment on my writing.

Joel Kravet, who is my most frequent correspondent, had some questions about horses that were mean and dangerous. Obviously, any horse can be ruined by bad, rough handling, but this kid likes to think that rarely happens in today’s world. That said, regardless of how carefully and kindly a horse has been raised and handled, a certain percentage of intact males will become dangerous as they start to mature, beginning at the age of 2.

We have a mare from whom we retained two foals, both colts, to train and race. They were by two different stallions. They each went to a top trainer, Randy Jerrell, in the fall of their yearling years. By January of their 2-year-old year, each one of them had become dangerous, striking, kicking, and savaging with their mouths. The only solution was castration, which immediately solved all their manner problems, and both of them are successfully racing today.

Joel also asked about breeding stallions, and any good horseman knows never to trust one. In my own experience, there have been horses like Speedy Crown and Garland Lobell, who were always perfectly gentle and never a threat in any way. At the other end of the scale was Speedy Somolli, who was best led to his paddock and back to his stall by a man on either side, each with a lead shank hooked to his halter. Speedy Somolli was not only vicious, he was smart about it, and just when he had lulled you into thinking everything was okay, he would strike; which didn’t stop him from being a truly great sire, with three Hambletonian winners among his many sire credits.

Regarding fillies and mares, there have been a tiny handful down through the years who were truly vicious, and they were born that way. We had a couple at Lana Lobell, and thinking I was smarter than everybody, I bought one here at Walnut Hall.

The one I bought had actually been trained and raced by Neil Shapiro, which contributed to my thinking that she really couldn’t be all that bad. I was wrong. She was that bad. Neil, who was a long-time friend, did his own shoeing while he was training. He told me that, on one occasion, this filly had lost one hind shoe. After almost getting killed trying to replace it, he took the only option available, and she raced with one hind foot barefoot until, after seven weeks, the other shoe fell off. After that she raced barefoot behind.

The only saving grace, if there is one, is that these killer mares are reasonably safe and manageable when they’re in season. But if you happen to breed one and let her carry the foal, you better give the foal his enema and all his shots before his mother decides to stand up.

There was also an interesting message from a smart horseman in New Zealand. Apropos of my piece on OCDs, he said that he had a mare who had five foals by Bettor’s Delight, and every one of them scanned perfectly clean in all four legs and stifles. Then he switched to two other high-profile sires, got a foal by each of them, and both had OCDs. (You’ll remember, an OCD is a bone lesion, fixable, but the bane of market breeders.)

This touches directly on the study of epigenetics, which involves heritable changes to the phenotype, or physical horse. It may well be that if different stallion crosses with the same mare will produce OCDs, while another cross doesn’t, that may rightfully be a genetic issue.

Certainly there has been no research linking the occurrence of OCDs to the genetics of the two horses involved. It would be a subject well worth knowing about, and I’d be happy to hear any anecdotal information anyone might have. OCDs have been a plague for as long as this kid has been breeding horses, and no one has yet come up with a way to eliminate them, although there have been plenty of attempts through research on feeding, exercise, climate, and various other things.

Finally, the 2-year-old racing season is now hitting its full stride, and there’s one curious thing to note when looking at the sire statistics. Every stallion standing in the United States is limited to a book of 140 mares by the USTA. Standardbred Canada, however, has a book limited to 250, and the registration of every foal with Standardbred Canada is recognized by the USTA.

That clearly gives a popular Canadian sire an edge over his competition in the states, for the obvious reason the more foals, the more winners.

I have no pat answer to this conundrum. From personal experience, there’s still a loss of heterozygosity or the variability factor, in the American trotter. That is manifested by a decline in the fertility of American trotting stallions, and without naming names, we have that problem with some of our best trotting sires today.

Every geneticist knows that lowered fertility in stallions is inheritable, so the problem is self sustaining. As it happens, there are now at least three 3-year-old trotting contenders with
“outcross pedigrees”. An outcross, as you’ll recall, is a pedigree in which no name occurs more than once in the first four generations.

Jim Harrison, the smartest man who ever worked with standardbreds, taught me that nature will never breed itself into a corner. Which means that there’s a trotter on the way who will open up a whole new trotting line, and solve our fertility problems. I have an idea who it will be, but I’m not telling.