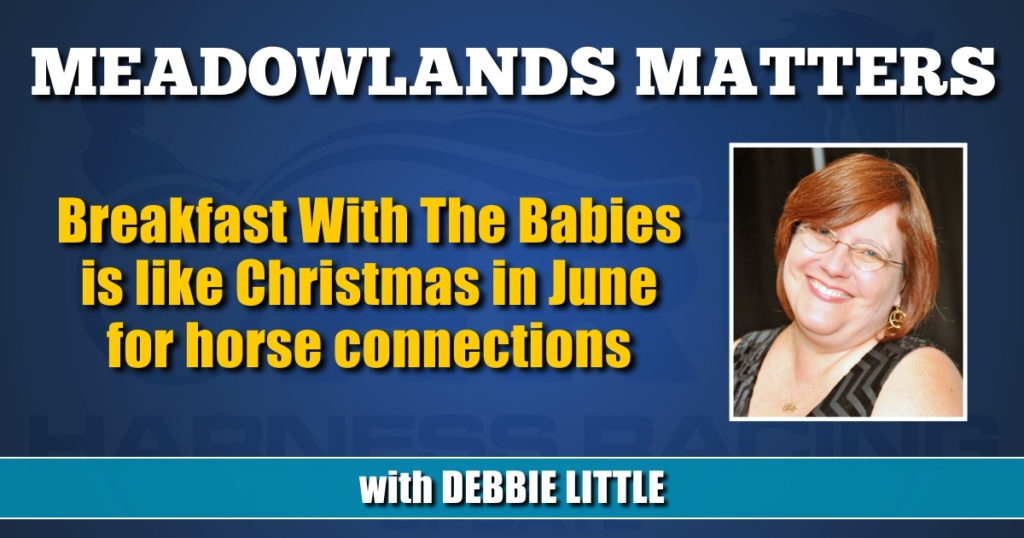 The weekly Breakfast With The Babies program of baby races at The Big M provides one of the first opportunities to see what horses are and might become. Connections are filled with anticipation as if it’s Christmas morning.

What’s a good description for The Meadowlands’ Breakfast With The Babies?

“It’s a little bit like Christmas for a little child,” said Hall of Famer Jimmy Takter. “We’ve been working and waiting and here comes Christmastime and we have our presents. It’s a nice present. Excitement is up. Sometimes you get disappointed. Sometimes you get surprised.”

On Saturday, June 19 at The Meadowlands, there were two qualifiers sandwiched around 15 baby races.

Takter was there supporting his daughter, Nancy, who had 22 starters that morning and he drove in four races for her, winning two.

With nearly one-third of her barn competing, it was impossible not to admire what a well-oiled machine Nancy’s stable is. In all, Team Takter won nine races, including one driven by second-trainer Josert Fonseca, who is excited to finally be bringing the babies to the track.

“It’s great just overall working with them and getting so close to them since they were broken and seeing them get better and better every day,” said Fonseca. “And then, finally, you get to this time of year and you get to see what you’ve done all winter and see if you’ve done a good job or not. A lot of them surprise you and a lot of them disappoint you. You don’t know. This is where you find out.”

Trainer Marcus Melander, who had nine in that day, prefers to race his babies at The Meadowlands.

“It’s such a nice track,” said Melander. “The surface and the track itself, the long straightaways. I think it’s the best place to baby race. Ninety-nine per cent we baby race here.”

For drivers, being available at Big M baby races can give them the edge when it comes to landing that special horse.

“It’s where all the really good ones qualify, so sometimes you might just luck out and be Johnny-on-the-spot,” said Mark MacDonald. “It has worked out in the past where you just happen to be in the right place, right time. This business is like life, timing is everything.”

Since driver Todd McCarthy, a native Australian, has been here less than a year, Breakfast With The Babies is brand new, but no worries, he’s a fast learner.

“I feel like I’m catching up pretty quick and getting the hang of things with the babies and how it works here,” said McCarthy. “I’ve been lucky enough to sit behind some nice ones and it’s really exciting. I think the most exciting thing about babies is that no one really knows. There are certainly nice ones at the start of the season but then there are ones that can look a little mediocre and then they jump out of the ground halfway through the season. So, it’s just an exciting time to try and get one you get a good feel for and hope that it can take you through the season.”

Fellow expat driver Dexter Dunn was introduced to baby racing when he visited the U.S. in the summer of 2011.

“As far as babies go, it couldn’t be more different back home [in New Zealand],” said Dunn. “The first 2-year-old qualifier, there might be three in it and there might be one for the day. Nobody really rushes the 2-year-olds back home.”

Even though sometimes it may be hard to do, driver Scott Zeron has learned to keep his emotions in check when it comes to driving babies.

“I used to get super excited, even training them down to two minutes, and then I’ve just had so many disappoint and so many that were disappointing turn into the ones that were great, so now I just take it in stride,” said Zeron.

For driver Yannick Gingras this is a fun time of year, but he tries to stay focused on the present.

“I don’t like to look too far ahead,” said Gingras. “They could get hurt the next week. I take it one week at a time. You definitely get excited about some, but I’m not looking three years ahead.”

In addition to talking about first-time sires like New Jersey’s Walner and New York’s Devious Man and Huntsville, the main theme of the day was teaching.

“What we do here on the Saturdays, and what I like to do is strictly educational,” said Zeron. “No showing off, nothing like that. I don’t want to find the bottom of their lungs. It’s strictly educational, because if I can educate them in qualifiers, they’re going to be really easy for me to race in a race.

“If I do the opposite and try and see what I’ve got in the tank in qualifiers, it might be very impressive out there, but when it comes time to race, I will feel the wrath of what I did at qualifiers. They will be fast, but uneducated.”

Like Zeron, trainer Julie Miller is also all about educating her babies. She won that morning with Gertrude, a daughter of Devious Man, driven by her husband, Andy.

“To me, my biggest thing is that they mind their manners, trot or pace super and finish with go,” said Miller. “It’s like taking that kindergartener to school the first time. You hand them off to the teacher and hope for the best.”

And you didn’t have to be a trainer or driver to enjoy the morning’s festivities.

David Reid, a baby race aficionado, had the past performances pulled up on his iPad and was totally immersed in the goings on.

“I think from an educational point of view, a big track is probably good for the young ones to get their confidence,” said Reid. “They’re going to come to their speed a lot quicker here than any other racetrack. The best drivers, the best racetrack, a mile racetrack, a lot of positives and that’s so exciting for sure. The only negative I would say is if you come here to The Meadowlands, you better be ready to roll the second week. The first week they give you a little pass but the second week you better be ready to roll.”

Reid is conflicted because in addition to being an owner, he’s a sales manager, syndicate manager, consigns horses and represents a lot of breeders.

“They are babies, that’s why they call it Breakfast With The Babies, but on the other hand it’s time for some of the more mature ones to step up and perform. But it’s a balancing act. It’s a long year.”

Northwood Bloodstock Agency’s Bob Boni spent time in both the paddock and with some owners outside on the second-floor grandstand.

“There might be some we sold or some we bred,” said Boni. “You want to see your next good horses, hopefully.”

Although maybe not as crowded as in past years, there were people at nearly a dozen tables, including owner/breeder Timothy Hauser of Hauser Brothers Racing Enterprises LLC and Alan and Steven Katz of 3 Brothers Stables.

Hauser’s main goal is a good experience for his babies.

“For a qualifier or even their first pari-mutuel race, slow and steady, pass a horse, pack it in, go home,” said Hauser. “You’ve only got so many bullets in the gun, especially with a 2-year-old. In my brain, my gun holds eight bullets and you don’t want to waste a bullet on a qualifier.”

The Katz brothers always enjoy being outside watching the baby races, especially when it’s one of their homebreds.

JK I Feel Fine, whose dam JK Fine Art is a sister to JK She’salady, was one of Takter’s nine winners that morning.

“We don’t care if we win qualifiers,” said Alan Katz. “Just to educate them, not abuse them and hopefully make a racehorse. These are the major leagues, it’s put up or shut up now, training is over. When you buy a baby, if you don’t think it could be a world champion, then don’t buy it. If you can’t dream, what are you doing in the business?”