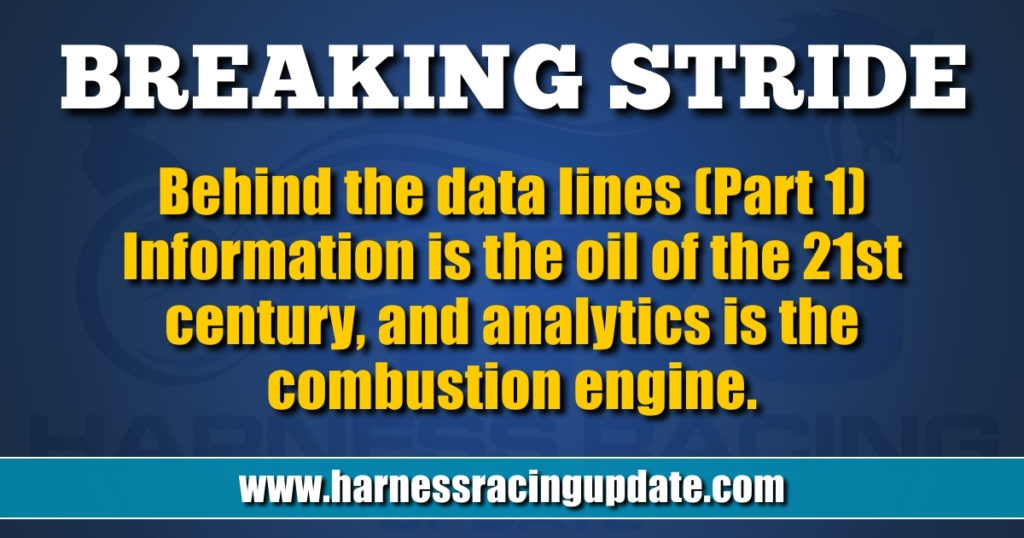 Behind the data lines (Part 1)

Information is the oil of the 21st century, and analytics is the combustion engine.

“I have an idea that would make buying and selling yearlings more fun, a little bit less of a crapshoot and perhaps generate additional revenue for the sales companies.”

My pal rolled his eyes and said, “And we’re off. The Trey Express to Loony Town is leaving the station.”

I smiled and said, “The conductor will be around to punch your ticket. This sport has many places where additional data would be valuable, but we begin with a yearling catalog page. The page must be online so that customers can link.”

He widened his eyes, “The original Troglodyte suddenly needs hyperlinks?”

“Yes. While it is true that every catalog page has a great deal of data, my idea is to take people in the yearling marketplace behind those lines in the standard catalog page and offer an additional level of information.”

He said, “What is this additional data of which you speak?”

“There are several, but I believe the most obvious place for more data depth is the production of the dam listings. When dams have had babies that raced, you find basic data on race times and earnings of the offspring. Good or bad, much of the production seems clear. However, in real life, the complete story of the dam’s production may not be clear at all. Not all information is in black and white, and more information and data are always available.”

“You want a deeper dive into the history of the foals of a mare?”

“Yes. For example, a broodmare I once owned has had five foals. Most went through the sales ring, and four made it to the racetrack. Potential buyers will open the page, and they will be familiar with the various stallions. What buyers would value is a more in-depth report on the life and career of each foal.”

“I don’t follow. Buyers can see every race line of every horse that raced or did not race.”

I shook my head, “Incomplete data that can be misleading in both positive and negative ways. Let me use the first few foals out of this mare. Maybe I will make myself clear.”

“This is what the first colt looks like on the HIP page.”

“No problem. The listing is fine, but there is more information that remains unknown. My suggestion is that for both buyers and sellers, in many instances, additional information could be an option. For example, at the end of the above entry, a blue hyperlink – ADA, Additional Information Available.”

“When they click the blue link, the customer will receive this information:

This 3-year-old beat the best in Sire Stakes action two times and was already eligible for the final when the groom found his leg injured in the stall one morning in June. He never raced again. An injury ended his career prematurely.”

My friend said, “I’m sure there were sharp horsemen who took note of this horse’s production and injury.”

“Maybe, but time passes. It was years later when the next foal showed up in the sales ring.”

“What happened to the second foal?” he asked.

“This is what a catalog page would show:

“Her story on the HIP page is both incomplete and somewhat misleading. An ADA link would flesh it out. Buyers glancing at the page will notice a stakes filly, a positive, who did not race at 3, a negative. Both are misleading and not part of a typical listing.

This filly was a member of a tiny pool of eligible yearlings guaranteed a slot in the NJSS final. Immature in June, she grabbed a couple of checks in stake races at age 2, when staying on her feet was good enough to cash. She was a stakes performer at age two, but that is misleading. After the stake’s races at age two, in July, she was listed and sold OnGait. Oddly, despite a virtual guarantee of stakes money as a three-year-old, the top bidder purchased her for her physical appearance, not for horse racing nor for harness horse breeding. She was out of the sport after a few early races.”

“The third yearling did not have a catalog page. If he ever does, it would look something like this:

Once again, this colt has a story that buyers will not know, information which could be of interest to people looking at purchasing a yearling that could be available with an ADA.”

In his last training trip before qualifying for his 2yo season, in the final turn, he took a misstep and fractured a coffin bone ending his season before it began. He had a tough break. After healing, as a green 3-year-old, this horse found more rough sledding. He drew outside posts in his first five races, and other horses ran into him twice. Things leveled out, and the rest of his record reflects reality. He is still racing at age five. In May 2021, he took a new lifetime mark.

He asked, “Isn’t information like this subject to fraud and manipulation? Sellers could hype their horses, unraced horses in training could be, ‘The best I ever had until the colt put his foot through the fence.’”

I nodded. “That is unlikely. Buyers should always beware, but you may notice all this information on my mare’s production is verifiable. In the examples above, buyers can check vet records for broken bones, you can document a series of poor posts, you can verify sales, and you can watch races.”

He recapped, “So what you are suggesting is that sellers with the time and the inclination could add supplemental data linked to the sales page.”

“Absolutely. You now know more about the production of my mare than you did five minutes ago, some positive information and some negative information. If data is the gold, as you are always claiming, this deeper dive into production could be both valuable and interesting to buyers and sellers.”

I smiled. “Next week, the Express to Looney Town will roll on to the next station behind the data lines.”