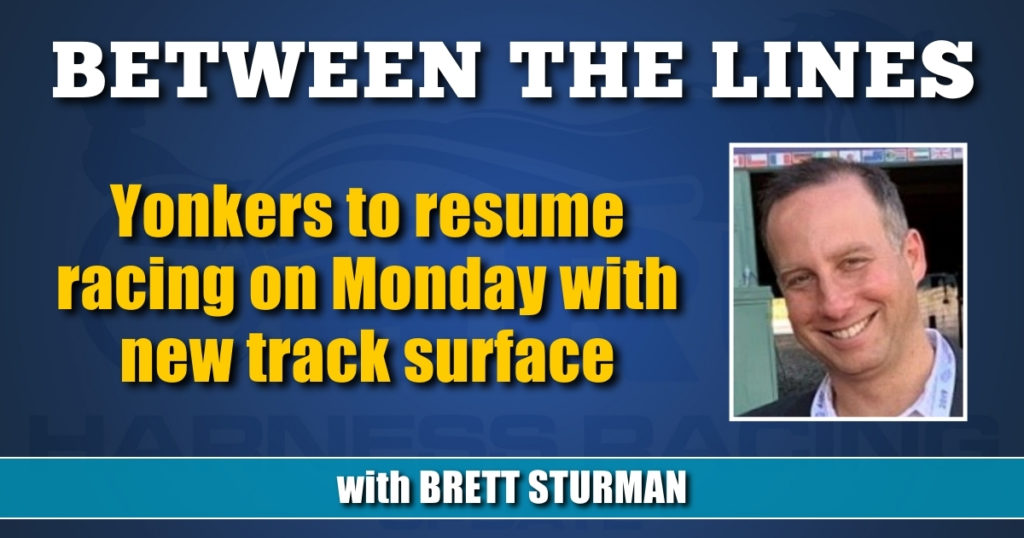 Yonkers to resume racing on Monday with new track surface

Dan and Greg Coon are in the midst of a 10-day reconstruction of the half-mile oval that includes adding 7,000 tons of new surface material.

Racing has been dark at Yonkers this week, but that’s not to say it’s been quiet at the Hilltop Oval. Far from it. Since the conclusion of the race card on Thursday, May 27, there has been a massive reconstruction project underway on the track’s race surface.

Like some other tracks, Yonkers was plagued through the winter months and even into March with repeated cancelations of live race cards. Some of which were strictly a circumstance of weather, but there were too many instances of less-than-excusable poor track conditions that caused repeated delays throughout race cards or cancelations altogether.

Now the track is getting a much-needed reconstruction in a massive effort spearheaded as consultants by expert track builders Dan Coon and his brother, Greg. It’s a project that is ambitious in scope, particularly due to the short turnaround time required.

“It’s a big project,” Dan said. “It’s no secret that Empire City Casino by MGM Resorts runs the show around here, and they want this to be equal to the very high standard that these horsemen demand, and that’s exactly what we’re doing.”

The track has had some modifications to its surface through the years including an effort to increase the bank in its turns in 2019, though it’s been far longer for maintenance of the scale being seen this week.

“It’s a collaborative effort between the SOANY and Empire City Casino/MGM Resorts. They came to an agreement that they would use our service to bring this track back to the standard that it was in 2006, which is the last time we were here,” Dan said. “Let’s face it, it’s no secret that we’ve haven’t done this substantial of an upgrade since ’06. So, there is some wear that comes from years of near year-around racing.”

There wasn’t one specific issue with the track that Dan pointed to, but rather the condition of the track is the result of time since the last major work was performed on it. Explaining it in layman’s terms he said, “I liken it to your car. You don’t have to change the oil or use quality oil, just keep driving. But at some point, there’s excessive wear that comes from excessive use. And part of it is the weather, too – it’s not perfect in New York in January and February and March. And here’s the other thing, these are top-flight and highly-skilled drivers and trainers and owners, and they’ll tell you what they think the track needs and it’s important that it gets it.”

Working within an already super tight timeline to complete the work, the weather hasn’t been kind to Coon and the entire crew working on the project.

“I’ve been here since last Thursday night, which was the last race night on the 27th. And from Friday to Monday, which was Memorial Day, it rained four and a half inches. And we worked right through it and have been busting our ass to get this done. I got to tell you, I’d be a little farther along if not for all the rain, but I’m not here to make excuses; we’re here to get this done.

“We’re here with 7,000 tons of new surface, and our goal is to have this race ready on Monday. I expect the track to be good on Monday, better on Tuesday, and then razor sharp on Wednesday, that’s how it works. And I’m just a consultant, but the track superintendent is Tim Masters and he’s going to be the one who is going to maintain it and he’s going to be exceptional.”

Speaking to the importance of the ongoing maintenance even after his work is finished, Dan said, “I always tell anybody that will listen — and not just at Yonkers or Hawthorne or Spring Garden or Pompano – everywhere – this is about equal parts. Design and construction is what we’re doing right now, and then the equal parts is the maintenance. It’s how the track is maintained every day that’s very important. And because they train horses here, too, it’s not like the track isn’t being used on non-race days. Which can be towards your advantage because you’ve got to get it right every day.”

As Coon and team complete their work for Monday come hell or high (or rain) water, much credit should be given to all involved in making the surface reconstruction project happen. It should lead to safer, higher quality racing, and make the track more dependable in challenging weather.
Elsewhere…

Northfield Park is a track that Yonkers presumably tried to emulate a couple years ago when they modified their track’s turns, and Saturday Northfield plays host to the annual Battle of Lake Erie.

It never feels fair when any horse draws post 8 on a half-mile track in a big race, but how unfortunate it is the locally-based wonder horse Southwind Amazon drew the 8-hole for this race? I guess it doesn’t work in such a way that you could have said that the local horse has to draw somewhere between posts 1 through 4, but it would have been interesting to see how the 11-year-old matches up against the invading free-for-allers. It’s one thing to repeatedly go in 1:49 on the Northfield half-mile and win by almost 10 lengths, but it’s another to do it against the sport’s best. Probably an opportunity missed there unless the race unfolds in a way completely unexpected.

As for the contenders, This Is The Plan finally draws well in a big race. He’s been so good this year in these spots and was second last out to only the unbelievably sharp Nicholas Beach who owns the co-fastest mark this year in harness racing in 1:47.2. Gingras is in town to drive for Burke and I’d expect him to try to set up on the front end, though we’ll see how hard Little Rocket Man to his inside tries to push early. Immediately to his outside is Stars Align, another Bongiorno nemesis. This one is tied for the fourth fastest mark this year at 1:48 flat and has been running like a machine since the change away from Takter following the Borgata series. For a potential longshot, Catch The Fire could work out a trip from the second tier with Brett Miller. The Adios winner from last at 3, he’s two-for-two for trainer Todd Luther, jogging in both preps for this race over at Scioto.