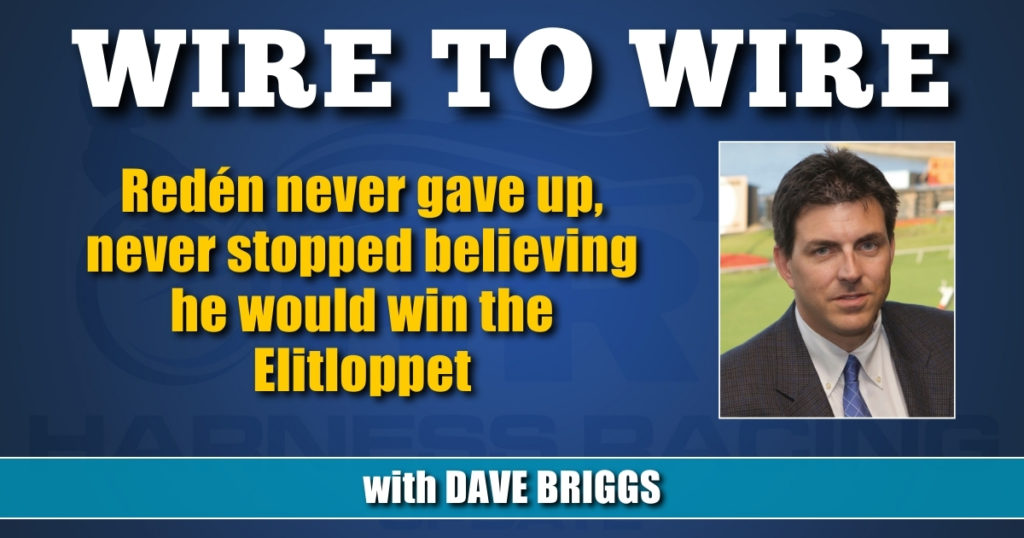 Redén never gave up, never stopped believing he would win the Elitloppet

Even when he was just another teenage Swede sprinting with the hordes to grab a good spot on the Solvalla tarmac when the gates were sprung on Elitloppet morning, Daniel Redén believed one day he would win his country’s most coveted trotting race.

Call it mysticism or optimism or something deeper, but the first generation trainer also believes there is a powerful energy at play in the universe.

Good thing, because given the gut-wrenching route the trainer took to Sunday’s Elitloppet glory, without that positive outlook it would have been no surprise if Redén had given up long ago on his Elitloppet dream, despite his insistence that he would never stop trying.

Afterward, the trainer blamed himself for allowing his charges too much time eating the lush paddock grass before the big event and chalked it up as a learning experience.

A year ago, racing Propulsion in the Elitloppet for a fifth time, Redén cried in the winner’s circle after the U.S-bred trotter charged to victory.

Five months later, he wanted to cry again when Swedish racing authority Svensk Travsport (ST) disqualified Propulsion from all 45 of his Swedish starts due to a nerve procedure that was done on the horse in the United States prior to Redén buying the horse and exporting him to Sweden. The trainer has said all along he had no knowledge the procedure had been done prior to the purchase (background story here). ST’s ruling also required Propulsion’s owner, Brixton Medical AB, to return some $2.9 million (U.S.) (SEK 26 million) the trotter earned in Swedish races.

Redén initially feared the decision would force him out of the business, but just a year after Propulsion “won” the Elitloppet, Redén stood in the Solvalla winner’s circle, tears again streaming down his face, after finally claiming the race that means the most to him. That he won it with the ultimate Brixton Medical AB homebred, Don Fanucci Zet, made the victory even sweeter.

Redén purchased both of the 5-year-old horse’s parents in the U.S. The sire, Hard Livin(SJ’s Caviar—Affinity), bred by Brittany Farms, raced in the U.S. for Jimmy Takter before Redén bought him in 2010 and exported him. The dam,Kissed By The West (Western Terror—Kissed By A Fool), is a pacer Redén purchased as a yearling in 2012 in Lexington that he believed he could turn into a successful trotter. That didn’t happen, but the consolation is she has turned out to be a prolific broodmare already.

With HRU European Report columnist Thomas Hedlund acting as a translator, Redén was asked Sunday about winning with Propulsion, having the victory taken away and then returning to Solvalla this year to win the elite race with Don Fanucci Zet, a horse he produced entirely himself.

Redén said when he arrived at Solvalla for Saturday’s races he, “felt great anxiety… because of what happened with Propulsion.”

The trainer believes that nervousness transferred to his horses, which did not race well.

Sunday was a different story.

Redén not only won the Elitloppet with Don Fanucci Zet in impressive fashion, but winning driver Örjan Kihlström also steered Redén’s U.S.-bred mare Sister Sledge (Father Patrick—Behindclosedoors) to an impressive 1:51.1 victory in the$120,000 Fyraåringseliten on the same card. The former Ron Burke trainee earned more than $840,000 racing in the U.S. before being sold to Brixton Medical via agent Robert Lindstrom for $265,000 at the Standardbred Horse Sales Company’s mixed sale in Timonium, MD in 2020. Sister Sledge’s mile in the Kihlström is a new European record for 4-year-old mares.

“At that moment something very heavy released from my body,” he said.

The universe had finally delivered.