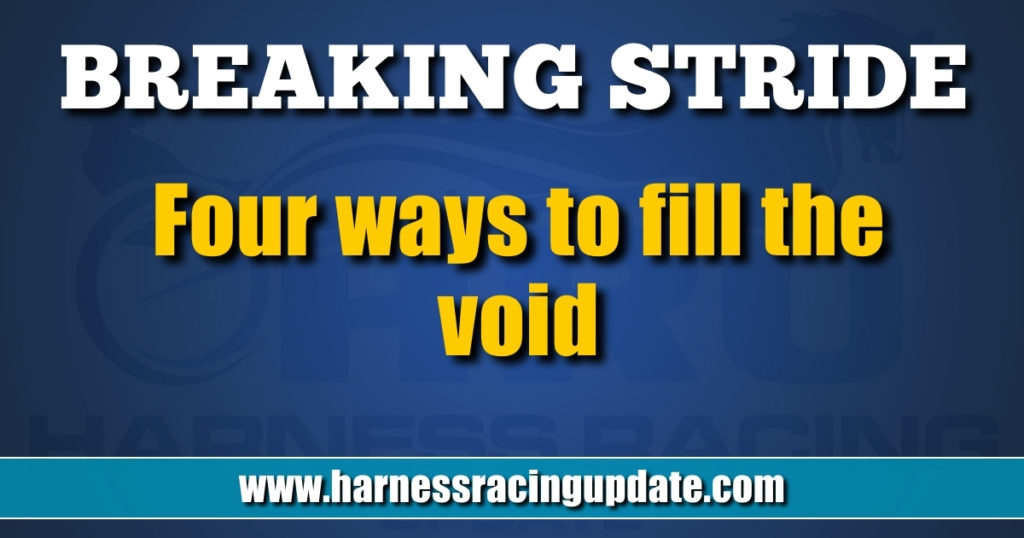 Four ways to fill the void

I sighed. “I have an idea to improve harness racing ownership.”

My friend clicked his fingers and said, “A magic wand.”

“No, just an incremental, simple fix.”

“The void between what I consider to be two of the most exciting days of horse ownership — the slamming down of the hammer at a yearling sale, and the day the wings of the starting car fold at the first 2-year-old qualifier. The months between are what I refer to as the big void.”

“Very little. I try to get out to see the babies train once a month, but the trip is a hassle. For many owners, visiting requires a lot of time and expense to watch a young horse jog or train. This void results in few owners leaning over the fence to watch the progress of their dreams. And the void is a turnoff for new owners. Numerous times friends have written me a check at the October sale and never saw the horse until June, and if the yearling does not turn into a racehorse, the newbies get zippo entertainment.”

He said, “I sense technology in your plan.”

“You sense correctly. Last week, I took part in an interesting experiment. A horse that I have an interest in was training two hours from my house. I could not make the scene. However, a pal of mine was going to be at the training session. Using his cell phone, he videoed the warmup mile and then the faster mile of my 2-year-old. He labeled the date and sent the video file to my iPhone.”

“And you had a chance to see your horse?”

“Did I ever! The video was great, crystal clear. I could zoom, rerun it in slow motion, and the clip even had a time bar. I archived the session and watched it a dozen times. The experience was outstanding.”

He said, “I see where you are going. Owners spend a lot of money to have horses trained. It would be an enhanced experience if they could watch the progress more often. Nice idea, the question is how to implement the videotaping.”

“Never fear. Trey is here with four methods where owners could eyeball the workouts, and each method could become standard fare in the standardbred two-year-old training experience.”

“Four, that means you can quadruple your stupidity.”

Ignoring him, I counted them off on my fingers as I opined, “First of all, cutting edge, conscientious, forward-thinking trainers could make regular videoing for clients a part of their services. They could arrange the process and even supply some commentary. As a bill-paying owner, a little of this would mean a lot. Yes, I know trainers are busy as heck, but really, the task is neither complex nor time-consuming.”

He nodded, my signal to continue, “Door number two. If the trainer does not want to get involved, and many may not, owners could sub-contract with grooms for a modest fee. These hard-working folks all have cell phones. Owners could say, Hey Suzie, once a week, when Rolling Thunder is out training, would you video the session and forward it to me.”

He said, “Nice, a little perk for the worker. What is number three?”

“Networking. The last time I was out at the barn, another owner from another state was visiting. He drove four hours to get to the farm to watch his two horses train. His name was Lance. Nice guy. We had a chat about our 2-year-old hopefuls. We shared hopes and dreams and lamented about how rarely we get to watch our babies train. I videoed a few seconds of my horse on the track using my cell phone. I believe Lance did the same. Driving home, I got to thinking….”

My pal interrupted me and finished my thoughts, “You, Lance, and other owners with babies in training at a training center could network. Just set up a schedule where one person makes a long drive but supplies the videos for your little network of long-distance horse owners.”

“Exactly, not only will we get to all watch our horse more often, we will get to know other owners. We are already kindred spirits in the game. We could root for each other’s horses. The whole thing would be a social experience in what is often a lonely game.”

He smiled. “And number four?”

“This concept is for an entrepreneurial person. He or she does not need an affiliation with the trainer. They could be an independent contractor. They find what 2-year-old horses are training at what farms or training centers. They make lists of who owns each horse. The entrepreneur sends a text to owners who fit the schedule they set up. ‘Hey, Tom. I will be at Willow Wood Training center on Tuesday, February 28. Do you want me to video Rambling Vicky and Call of the Wild?’ What an excellent service. Someone could make some money.”

He signaled a thumbs up and said, “They would need to coordinate with the trainer. How much would they charge the owners?”

“All that is to be determined. Regular videos with a couple of minutes of my baby jogging or training would have value from my perspective. The ability to watch my horse every week or two would fill the void and help the sport.”