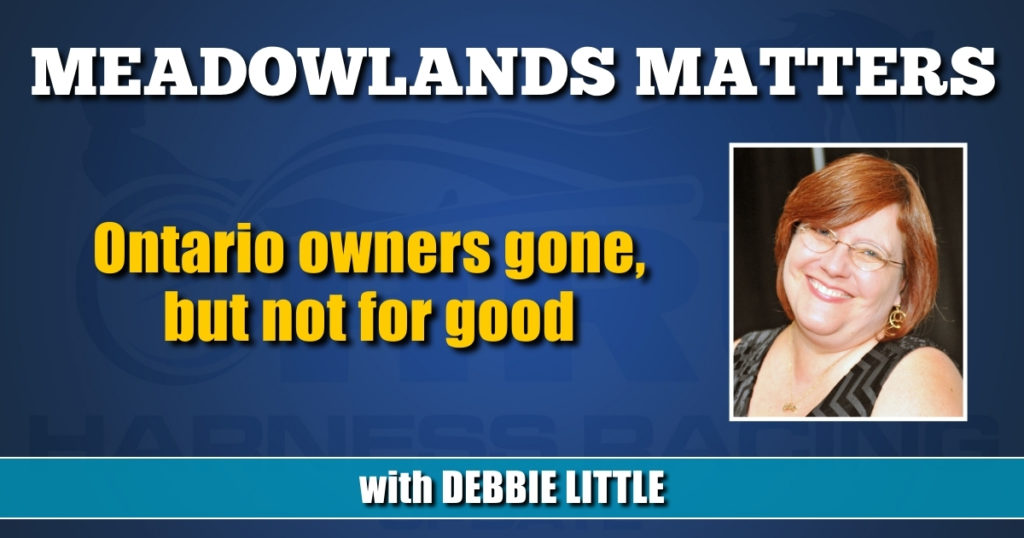 Ontario owners gone, but not for good

When Woodbine Mohawk Park ceased racing on April 2, some owners sent horses to the U.S. pretty quickly, while others tried to hunker down and wait it out, but even they eventually had to give in.

For trainers with stables in both the U.S. and Canada, it wasn’t too hard to send horses down to race at The Meadowlands, but for owners with purely Canadian-based trainers, temporary barn-hopping would be necessary.

“I held out as long as I could,” said owner Brad Grant. “I didn’t want to leave [trainer] Richard [Moreau], he’s been great. I’ve had a tremendous amount of luck with Richard and we were hoping to wait it out, but after a while, you have to finally say ‘Uncle’.

“I talked with Richard and he was the first one to say you’ve got to go. No hard feelings. I’ve told him when they get back racing [in Canada], I’ll have horses back in his barn. There’s no issue there.”

Claus Andersen | Canadian owner Brad Grant said he had no choice but to send horses to race at The Meadowlands after racing shutdown in Ontario.

Grant, who lives in Milton, ON, had always planned to send It’s Academic, a 4-year-old trotter, to trainer Ron Burke in early April, but the overnight stablemates that made the trip with him were a different story.

“I really hemmed and hawed about doing it and finally I needed to race,” said Grant. “I saw it with my overnighters last time that they need to get themselves back in race shape. So being down for two months, it takes another two or three races before you feel that your horse is back to where he should be.”

To be fair, Burke trains 300 horses and wasn’t necessarily looking for more, but wanted to help Grant.

“How do you say no to Brad?” said Burke. “He’s in a bad spot and I usually train his racehorses when they come south. If I was in the same spot, if I called him and said, ‘I need to send them up there and you need to figure a way to get my horses raced,’ he’d be like ‘no problem.’ Horsemen are very good that way. Nobody wants to see anybody else suffer.”

In addition to It’s Academic, who’s in The Graduate Saturday night (May 22), Grant sent down five others, two of which are also racing at The Big M this weekend.

“The nice thing is that The Meadowlands will let me race multiple horses in a race,” said Burke. “When a Brad horse beats one of my horses, it hurts a little bit but you’ve just got to do the right thing. Brad’s been very good to us. He’s bought a lot of horses off of us. He’s great for the business and he’s always available if you want to buy an expensive horse, he’s in.”

Burke has been contacted by other owners looking to send him horses and he’s very nicely suggested other trainers.

“My first responsibility is to my people that are with me all year,” said Burke. “Brad’s here all year. He’s part of the reason I have Atlanta. There are other great trainers in the United States that need an opportunity.”

Canadian horsemen are enduring their third shutdown since the pandemic closed North America in March of 2020. The first one lasted about 11 weeks, the second was nearly two months and this one could is predicted to go just over 10 weeks, with a resumption date of June 14 announced Thursday.

Brampton, ON resident, Mike Guerriero, co-owner of 8-year-old pacer Sintra, was planning on sending the gelding to race in the States, just not in late April.

“Would he have come down there [when he did] with the present circumstances not being what they are?” said Guerriero. “Probably not.”

Sintra, who was trained in Canada by Anthony Beaton, is now in the care of Brett Pelling and is racing Saturday at The Meadowlands in the open-preferred handicap.

“We have to get him in condition,” said Guerriero. “He’s an old warhorse. He knows when he needs to turn it on and off. But racing against these other horses, if you’re not prepared you have no chance.

“So, if we didn’t do something when we did, we were going to be so far behind. They’re going to start going in 1:47 and possibly 1:46. You can’t expect a horse that’s off a layoff for two months just to come into race shape in the first race or two and drop to those speeds.”

Pelling agreed to take Sintra as a favor for a friend, but has turned down others because, just like almost every other U.S. trainer right now, he doesn’t have enough staff to take care of a lot more.

“When a horse like Sintra comes along, he’s a pretty cool dude, so how can you say no to him?” said Pelling. “I would love to have another half-a-dozen horses out of Canada, there are some good horses up there, but [being unable to get more staff] I just say no.”

Tattoo Artist raced in The Graduate last week at The Meadowlands for co-owner Eric Cherry’s Let It Ride Stables Inc. The 4-year-old is now pacing out of the Chris Ryder barn, which was totally part of his schedule.

“With Tattoo Artist it was planned that when he was in the U.S. he would be with Chris and when he was in Canada he was going to be with [Dr.] Ian [Moore],” said Cherry of Boca Raton, FL. “And the plans did change because of the Graduate and Confederation Cup and a few of the others when they canceled.

Trainer Nik Drennan has been racing horses in the U.S. for Canadian owner/trainer Donald Lindsey for 10 years. Lindsey, who co-owns most of his horses, won the William Haughton Memorial in 2011 at The Meadowlands with Alexie Mattosie trained by Drennan.

“Since me and Don and the partners have had this relationship over the last 10 years, it’s nothing out of the ordinary for them to send me horses, other than maybe that they’d send down one or two and now its five or six,” said Drennan.

It’s been an outstanding Meadowlands meet for Drennan, who is 10-for-45, due in part to Lindsey horses like Poseidon Seelster, who won a leg of The Graduate last week. Yacht Seelster is in a Big M overnight race tomorrow night.

“Don’s the trainer and partial owner and his partners are like family, they’re very close,” said Drennan. “So, when Don says they’re going back, they’re going back. There’s no me trying to keep the horses here or anything like that and it all works out really good. His partners are great and they send down really good horses and they’re ready to race. It actually couldn’t be any better.”

It’s impossible to know at this point what impact COVID-19 has had on Ontario’s harness industry but it’s not a stretch of the imagination to believe that they have lost owners along the way.

“I guess we’re not going to know what the collateral damage is until racing gets going again and hopefully enough people will stick it out and we’ll get back to some semblance of normalcy and get back to life as we knew it,” said Grant. “It’s expensive to operate a horse. And then to have the shutdowns where you have nothing but money going out and nothing coming in. At least when they’re racing and nothing’s coming in there’s always next week. But right now, we don’t know when next week is going to be. I see people that are selling and will continue to sell and won’t be back. I think there are going to be a lot of faces around the racetrack that you’re going to miss.”

But Grant also sees the silver lining in the clouds that still hover in Ontario.

“We want to beat each other up on the track in every race but when hardship seems to fall on the industry, there are so many people there to support,” he said. “I think a lot of people could have their noses out of joint with us coming down there and racing but I haven’t heard it from anybody that I know that’s down there and I think that speaks volumes of who the people are that are in the horse business.”

Breakfast with the Babies returns on Saturday, May 29 and the races that morning will be called by Dave Little.