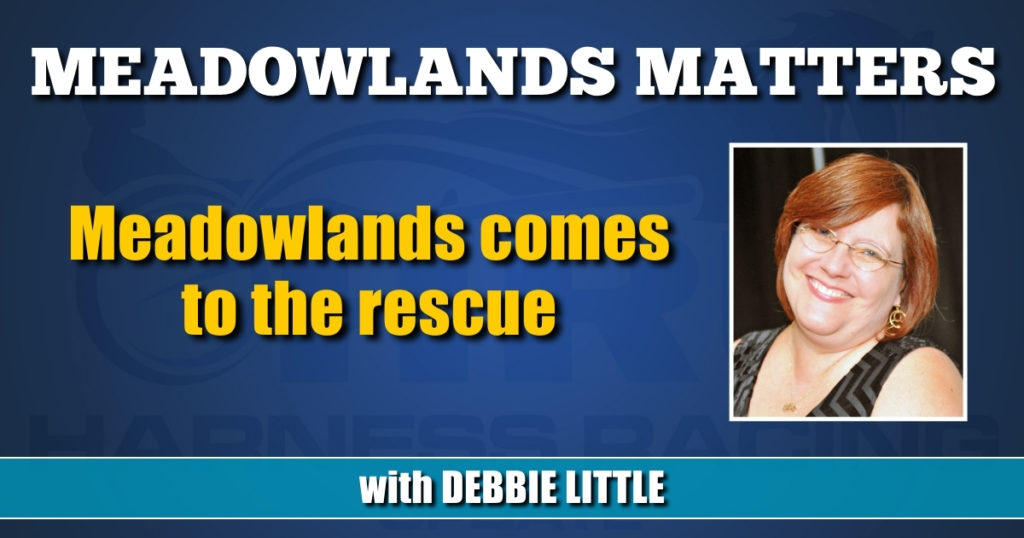 Meadowlands comes to the rescue

The New Jersey track has added races to keep horses pointed to Ontario stakes races on the track now that major races north of the border have been moved to the fall.

As Ontario racing remains in limbo, The Meadowlands paces to the rescue.

Last week, Woodbine Entertainment announced that the North America Cup, originally scheduled for June 19, and several other stakes, have been moved to later in the year. Since the Cup is normally the first major stakes race of the year for 3-year-old pacers, as well as being a major prep for The Meadowlands Pace, its move would leave trainers scrambling for quality starts.

The Meadowlands, in cooperation with the Standardbred Breeders & Owners Association of New Jersey (SBOANJ), will add open races for 3-year-old pacing colts and fillies to be offered on each Saturday in June with a preference to Meadowlands Pace, Mistletoe Shalee, North America Cup and Fan Hanover eligible horses.

In a Tuesday press release, Meadowlands’ president and chief executive officer Jeff Gural said: “It’s clear that many owners and trainers are affected by the situation in Canada. With the NA Cup and its companion stakes moved to September, there really aren’t many options for the 3-year-olds to get races on a big track that they need to be in shape for our marquee stakes. It seems like the right thing to do.”

But it’s not just the 3-year-old pacers benefitting from the benevolence of The Meadowlands and the SBOANJ.

Trainer Nancy Takter reached out to Meadowlands’ chief operating officer and general manager Jason Settlemoir about older pacing mares, which dovetailed into the track and SBOA coming up with additional races.

“I have those returning 4-year-old mares JK First Lady and Peaky Sneaky and now that the Roses Are Red has been moved from the schedule in June at Mohawk, they don’t have a stakes race until July,” said Takter. “So, they’ve ended up with this big gap and the open mare races [at The Meadowlands] don’t always fill.

“So, I just reached out to Jason to see if there was something they could add. Mainly because we’ve got them qualified and got them going now and if you can’t get them in you can’t keep them race-fit and then the stakes at The Meadowlands are going to come up this summer and they might not be ready. So, I was obviously very thankful that The Meadowlands was able to put together a series not just for the mares, but for all those horses that end up with little gaps in their stakes schedules.”

A series to be contested in late May and early June was added for pacing mares, while events for older pacing and trotting horses and geldings are still to be scheduled. In addition, on June 11 and June 25, there will be open races for 3-year-old trotting colts and fillies. All of these races will be written with preference going to horses paid into Meadowlands stakes.

Trainer Ron Burke also appreciates what The Big M and SBOANJ are doing for the horsemen.

“We’d be turning horses out and restarting them,” said Burke. “We’d be giving horses six-week breaks if it wasn’t for this. It’s going to make a big difference. They really thought it out. It’s going to be a big help for everybody.”

When Flamboro Downs announced in April that it would be cancelling the Confederation Cup (scheduled for May 23), The Big M filled the void by adding a Graduate leg for pacers on May 15.

“We decided to do it because we felt it was necessary to step up for the industry since Canada is facing continued shutdowns and cancellation of races,” said Settlemoir. “We felt it was best for all the horsemen and horsewomen so that they could have somewhat of a normal schedule.”

But now, The Big M is going above and beyond by picking up the Graduate legs for both trotters and pacers, originally scheduled for June 5 at Woodbine Mohawk Park (WMP). The date of the races remains the same.

“I’d like to thank the SBOA of New Jersey, because they stepped up here,” said Settlemoir. “We spoke to Mark Ford on Monday evening and they got back to us right away and they were very happy to step up along with us to do this for the industry.”

Saturday (May 8), The Meadowlands will play host to the first leg of the Miss Versatility for trotting fillies and mares. The track also graciously will play host to the second leg – originally scheduled for Woodbine Mohawk Park for May 28 – which will now be raced on May 29. They’re also adding a leg on June 12, expanding the series to a total of six legs.
“We were ready to ask [Jeff Gural] to do something and he beat us to the punch,” said Ford, president of the SBOANJ. “So, kudos to him. Jeff is always very good at times like this trying to accommodate the horsemen.