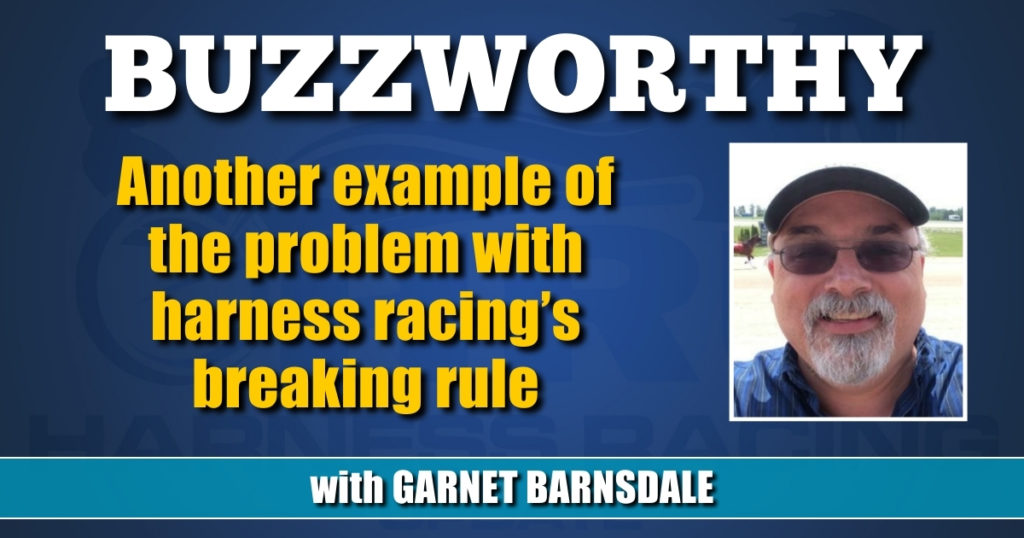 Another example of the problem with harness racing’s breaking rule

Twitter got buzzing after the completion of race 10 at Pompano Park Monday night (May 3) (unfortunately a replay was unvailable) and the tweeting topic was about how the breaking rule is applied as it related to the winner of that race who was on an extended break during the stretch run.

DRF Harness editor Derick Giwner got the Twitter ball rolling with this initial comment on the events: Race 10 at Pompano is the problem with the breaking rule in #harnessracing. The horse on the lead complied with the rule in terms of losing ground and regaining stride yet was still taken down. Maybe John Campbell’s idea of 25 strides without being on gait makes sense.

We’ll get back to the 25-stride breaking rule in a minute. In the race in question, 6-5 favorite Entranced, driven by JD Wengerd, broke stride inside the 1/16thpole and appeared headstrong and he didn’t lose ground for about 10 strides. He appeared to start to lose ground just as he was regaining his stride nearing the wire. In this case, watching the replay, the correct call to disqualify him was made based on rule 18.10 c) of the USTA 2021 Rulebook:

18.10 Horse Breaking from Gait. When a horse breaks from its programmed gait, the driver shall at once, where clearance exists, take such horse to the inside or outside and pull him to its gait.

The following shall be considered violations:

(a) Failure to properly attempt to pull the horse to its gait.
(b) Failure to take to the inside or outside where clearance exists.
(c) Failure to continuously lose ground while offstride.
(d) Committing an extended break, in which the horse may be placed last.

But maybe Giwner has a point when he questions the judgement call part of this rule. What’s an extended break? Should it be a number of strides? At what point after the horse starts to gallop must he begin to “continuously lose ground”? It also wasn’t explained why the horse was placed fifth in an eight horse field, only that he was disqualified for violating the breaking rule during the stretch drive.

Giwner’s take: The thing for me is how long is realistic for the driver to react before the horse has to lose ground? I’m thinking 4-5 strides is fair. If after 5 strides the horse hasn’t started losing ground he comes down. But there is no rule… which is my issue.

The 25-stride rule that he mentioned in an earlier tweet is a universal rule that was passed by the USTA that states any horse that is off stride for 25 strides or more is automatically disqualified. But the rule has not been adopted or is being used by all racing commissions (full story here).

A logical argument can be made that breaking rule 18.10 leaves to much room for judgement calls. Perhaps harness writer Greg Reinhart has the answer as noted in his tweet: Just make it like Europe where if you run, you’re DQ’d and you don’t have to worry about judges making subjective rulings. I’m personally for that with pylon violations too, though everybody would hate it lol.

Pylon violations? Don’t get me started. That would be another full column.