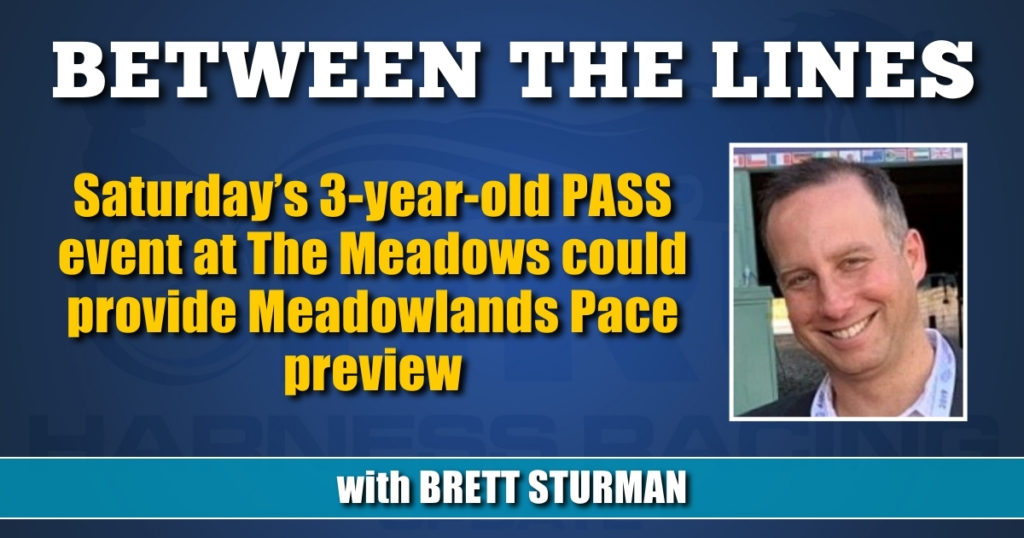 Now into May, we’re officially into 3-year-old stakes season. In recent weeks, some of the higher acclaimed 2-year-olds from last year have made their way onto the track both in pari-mutuel races and in qualifying races, including last year’s champ Perfect Sting. Yet, Saturday’s (May 1) Pennsylvania Sire Stake (PASS) races at The Meadows (11:25 a.m. post) mark the highest number of sophomore pacing stakes caliber horses on a single card this year. Not to be outdone, the unofficial road to the Hambletonian gets underway Saturday afternoon as well with the Dexter Cup at Freehold.

On the pacing side first, of the 42 current eligible nominations to the Meadowlands Pace in July, nearly 20 per cent (8) of them are featured in two separate opening leg PASS divisions at The Meadows. What’s more interesting looking into the numbers is that of those 42 nominations, 10 of those were February supplements. Those supplements racing in the PASS include Hellabalou, last year’s PASS Final runner-up Chase H Hanover and most surprisingly that he wasn’t previously nominated, Southwind Gendry. Amazingly, Lou’s Pearlman with his 1:49.1 mark as a juvenile might be favored Saturday in his PASS race (7-2 morning line) and hasn’t been nominated to the Pace. It’s only the first race of what will be a long season for many of these, yet how some of these horses perform could give a glimpse into what’s to come in the months ahead including how races such as the Meadowlands Pace and North America Cup could take form.

Not to be overlooked in the stacked second PASS division is Chase H Hanover. Trained by Scott Cox, he was first or second in all but one of his 10 races last year. A bridesmaid to Southwind Gendry on three different occasions last year including the PASS final, he was extremely impressive when going wire-to-wire by open lengths over Lou’s Pearlman in the Standardbred on Jug day last September. It’s hard to get a read on those Northfield qualifiers, but it’s certainly a sign of positive intent that Sears is down to get the call – he almost pulled off a 16-1 upset with him last year. The other colt in this division nominated to the Pace is the Always B Miki colt, Billy Clyde. Trained by Ray Schnittker, he’s started off his 2021 season with two easy wins in non-winners of 2 competition at Pocono. He’ll need to step up, but he wasn’t totally disgraced either last year in limited attempts against the divisions’ best, losing by only a few lengths.

The first PASS division as race 4 may not be as end-to-end deep as the other one, but it’s highly intriguing, nonetheless. There’s three Burke horses in the race, and only Literl Lad Hanover with a 1-for-14 record has been nominated to the Pace. Not nominated or supplemented as of yet are Lou’s Pearlman and morning line favorite Lunar. In the case of Lunar, the unbeaten Sweet Lou gelding didn’t even debut until less than two months ago, though he looks like he could be turning into any kind. Lou’s Pearlman is more difficult to figure. Perhaps there were doubts of his ability on a big track, but he looked awfully good in back-to-back qualifying wins over Summa Cum Laude at the Meadowlands. He seems like an imposing proposition from the rail and it’ll be fascinating to see who is the better of the barn-mates. Impressive performances from either or both could determine what stakes they target going forward this year.

Starting from post 2 in the race is Hellabalou – one of the February Meadowlands Pace supplements. It’s interesting to see Delaware-based trainer Eddie Dennis target the Meadowlands Pace, so he must think highly of this one. Hellabalou showed some speed and potential early last year as a freshman, and couldn’t have been any more visually impressive off cover in his seasonal debut two weeks ago at Chester. He was a relatively unknown last year but could make a name for himself now; Andrew McCarthy retains the drive.

At Freehold and on the trotting side, eight horses will go for the $115,583 Dexter Cup final for 3-year-old trotters. From recent history, the Dexter Cup isn’t likely to produce a serious Hambletonian challenger though there is one in here that is at least Hambletonian nominated. That honor goes to one of the two Svanstedt horses in here, Ambassador Hanover.

Ambassador Hanover was never involved in his lone attempt outside of the New York Sires Stakes which came in an International Stallion Stake, but it could be a much different story starting from post 2 on Saturday. He comes into the Dexter Cup after receiving a bye and I’d expect Svanstedt to be aggressive from the inside draw. Incommunicado will be the race favorite and is the stablemate of the latter. The Dexter Cup elimination winner needs to overcome post 7 for the second straight week. Gingras is down to drive Incommunicado, as well as slated to drive Southwind Gendry and Lou’s Pearlman at The Meadows just a couple of hours earlier, making it a busy day for him.

While sharing the stage with stars from another breed on this year’s first Saturday in May, the PASS 2021 opener as well as the Dexter Cup and other stake races over The Meadows and Freehold cards means it’s possible that more than a few of these horses could be seen in the summer classics as well as deep into the fall.