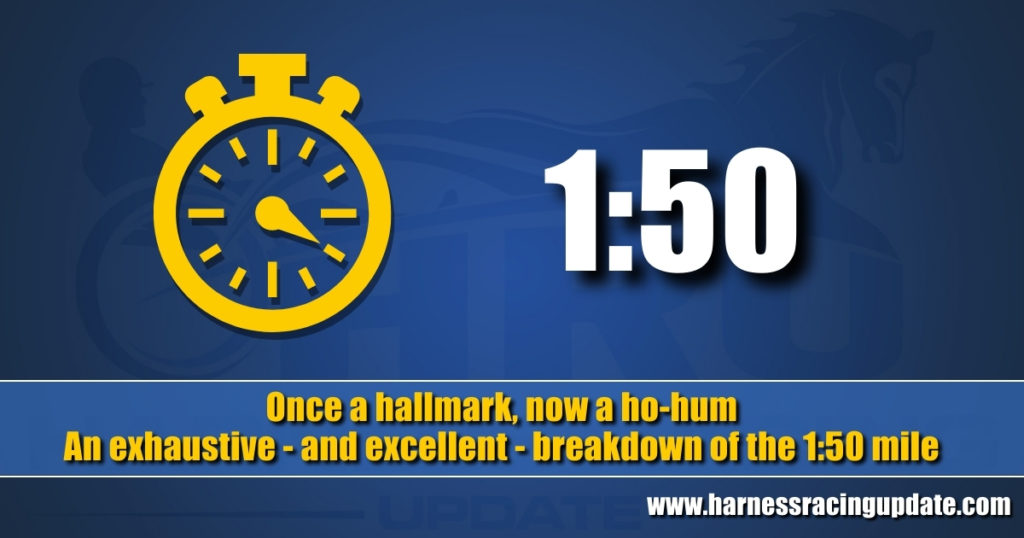 Once a hallmark, now a ho-hum

An exhaustive — and excellent — breakdown of the 1:50 mile.

by Philip and Jonathan Sporn

Just over 40 years ago, a high school kid from New Jersey got interested in harness racing shortly after The Meadowlands racetrack opened. He kept track of all the top performers that raced at “The Swamp” and organized them every which way into a collection of charts. Keep in mind this was in the pre-computer and pre-Internet era, when record keeping was done via pencil and paper, and created on a typewriter (youngsters can Google that for photos and history).

The kid decided to send a package of information to Stan Bergstein in care of his Harness Tracks of America office in Chicago, thinking he might use the stats in an issue ofHoof Beats. Stan wrote back, thanking the kid (me) for the submission, and used them in his weekly Loose Lines column in Harness Horse magazine.

The title of this article is a takeoff of the headline of that April, 1980 column, “The 2:00 mile, Once a Hallmark, Now a Ho-Hum.” As archaic at this sounds, at the time, with a little bit of effort, one could keep track of all the 2:00 performers, in my case at The Meadowlands.

Fast forward a few months, and I started college at Fairleigh Dickinson University in Madison, NJ. Lo and behold, FDU was situated under two miles from the new location of Stan’s HTA office. In fact, it was literally on the grounds of Morristown Airport, notable for playing host to Air Force One during the last president’s weekend vacations to his golf club in nearby Bedminster. I became a sporadic visitor the HTA office, visiting with Bergstein’s executive assistant Chris Castens, with occasional interaction with Bergstein, who gave me the nickname Boy Wonder.

Fast forward a few more years, to my first full-time job, with Sports Information Data Base (OTC: SIDB), a company attempting to put the entire history of sports on computer. I was assistant editor of standardbred racing, under the tutelage of future Hall of Famer John Berry, a friendship which exists to this day. The company, however, a precursor to the Internet, failed within a short period of time.

In the winter, 1979 issue of Hub Rail magazine, Berry wrote an article entitled The 1:50 mile: Sorry It’s a Long Way Away.In it, he chronicled the fictitious pacer SPEEDING COMET, who, on Aug. 28, 1997, time trialed in a record 1:49.4 at The Red Mile “to the delight of the crowd” becoming the sport’s first 1:50 performer. Elsewhere in the article, Berry stated that “there is little evidence to support the possibility that a standardbred can support a rate of speed of 27 ½ [seconds] for four consecutive quarters.” He also said that “in fact, the first 1:50 mile just could be or 15 or 20 years away.”

After analyzing some of the fastest miles in recent memory, Berry provided proof like a CSI investigator. He detailed two main reasons why the 1:50 barrier was a long way off: “speed not sustainable” or that some horses needed a “breather.” At the time, ABERCROMBIE held the world record of 1:53 in a race, while STEADY STAR’s T1:52 time trial was the all-time speed record. Through the end of 1979, no horse had ever trotted faster than 1:55 in a race.

Turns out John was 100 per cent spot on in his findings… until he wasn’t.

And I rib him about it to this day.

Unfortunately, Niatross’ 1:49.1 time trial in 1980 busted his theory less than a year later. Since then, it was become such a routine occurrence that it barely merits a mention. As a result, I decided to see just how common the 1:50 mile has become, and in my usual “every which way imaginable” investigatory research, here are some of my findings. However, a major shout-out goes to my assistant (and son) Jonathan who helped me navigate through almost one million characters of data and put them in a readable, and easily explainable, format.

Multiple charts breaking down everything you ever wanted to know about the 1:50 mile available here.

BEST OF THE BEST

The all-time leader is the iron-tough GOLDEN RECEIVER, who leads the way with 36 career 1:50 miles (out of his 64 lifetime wins). Next on the list are a pair of Horses of the Year MCWICKED (27) and WIGGLE IT JIGGLEIT (26), then ALWAYS B MIKI and BETTOR’S EDGE (24). Rounding out the top 10 are the richest ever standardbred FOILED AGAIN (23), SWEET LOU and DANCIN YANKEE (22), and a three-way tie of STATE TREASURER, SCOTT ROCKS and SHARTIN N (20). Scott Rocks is the leading active 1:50 performer.

GIRLS CAN PACE FAST, TOO!

WHERE IN THE WORLD?

Here’s an interesting tidbit. Among the 72 single-credit drivers, Frank J. Davis has the fastest performer (JK PANACHE), whom he steered to a 1:47.3 win in 2015 at Vernon Downs, followed by Jared D. Finn’s 1:48 win behind ROCKIN GOOD at Lexington in 2015. Curiously, JK Panache also accounts for another driver’s lone 1:50 score, a 1:49.3 win for driver D. Jimmy Whittemore in 2013 at Vernon Downs.

Counting the number of total 1:50 miles (not distinct horses), SBSB offspring leads with 394 miles to the 382 by offspring of Bettor’s Delight. Overall, 362 different sires have produced at least one 1:50 performer. Of those, 198 sires have multiple 1:50 credits.

Among sires with one 1:50 credit, with only one solo 1:50 mile, MATTUITY’s son WHOLEFTTHEGATEOPEN, and MR CANTAB’s son HOMICIDE HUNTER (both at 1:48.4), are the fastest one-hit wonders.

ARTSPLACE dominates the broodmare sire list, with a remarkable 190 1:50 broodmare sire credits (Always B Miki his fastest). That is almost double the next on the list (CAMLUCK), with 99 credits (American History), then WESTERN HANOVER (92 – Betting Line), ABERCROMBIE (91 – Holborn Hanover) and JATE LOBELL (80 – Panther Hanover). Even more impressive: over one out of every 10 1:50 miles has been recorded by a horse with an Artsplace dam (677 of 6,472).

The rarest occurrences of a 1:50 mile happen on a ½ mile track. It’s only happened 99 times in harness history, accomplished by 72 distinct horses. Only 13 pacers have multiple 1:50 ½-mile track scores. Two warriors have performed the feat six times: WIGGLE IT JIGGLEIT (including a single-season record four in 2015) and SOUTHWIND AMAZON. Another two have four such miles: CLEAR VISION and DANCIN YANKEE. Amazingly, Southwind Amazon has accomplished it in each of the last four years (2017, 2018, 2019 and 2020)!

A GOOD DAY TO PACE FAST

FAST AT ANY AGE

Here’s a mind-blower in terms of dependability. The record for most 1:50 miles in different years is held by BETTOR’S EDGE. He recorded 1:50 wins in NINE different years — every year from 2012 thru 2020. Close behind are CLEAR VISION and DAPPER DUDE (8) and FOILED AGAIN, DANCIN YANKEE and ELLIS PARK (7).

A LONG TIME BETWEEN DRINKS

There have been 25 races with purses of $1 million or more that resulted in a 1:50 mile. The highest purse was the 2011 $1.53 million North America Cup won by UP THE CREDIT in 1:49.3. Interestingly, two horses have 1:50 scores in $1 million races: ROCKNROLL HANOVER and THE PANDEROSA, and they both accomplished that feat winning the North America Cup and Meadowlands Pace.

A LITTLE MONEY FOR A LOT OF EFFORT

In terms of distinct tracks, WIGGLE IT JIGGLEIT does not care where he races. He recorded 1:50 wins at a record 11 different tracks. Right behind at 10 are BETTOR’S EDGE and MCWICKED, followed by BETTOR SWEET and SHARTIN N (9), and SWEET LOU, STATE TREASURER, CAPTAINTREACHEROUS and ALWAYS B MIKI, deadlocked at 8.

On the other side of the coin, both JK PANACHE and NIGHT PRO recorded ALL 17 of their career 1:50 miles at one track: JK loves Vernon Downs, while Night Pro is also happy close to home, adoring the track surface at Hoosier Park. It’s a big gap to Mohawk-loving MAJOR HOTTIE (11) and Pocono Downs’ local MUSTANG ART (10).

Here’s a mark of consistency: only 37 horses have record 1:50 or faster wins over all size tracks (mile, 5/8 and ½). The first was JENNA’S BEACH BOY. If we fine-tune it to horses that accomplished it in thesameyear, that list is dwindled down to 26, first achieved in 1996 (JBB), and not achieved for another 11 years (GOLD DUST BEACH)! In 2020, 4 horses recorded the trifecta: SECTIONLINE BIGRY, CATCH THE FIRE, PARTY GIRL HILL and SANDBETWEENMYTOES, with PGH the only female to do so. Incredibly, WIGGLE IT JIGGLE is the only horse to accomplish it twice – in 2015 AND 2016.

What will happen in years to come is unknown. Have horses reached the plateau where horses cannot physically go any faster? Hard to say, but time will tell. By the way, when John Berry’s imaginary horse Speeding Comet broke the 1:50 barrier on 8/28/1997, there had been 85 “real” 1:50 miles as of that date.