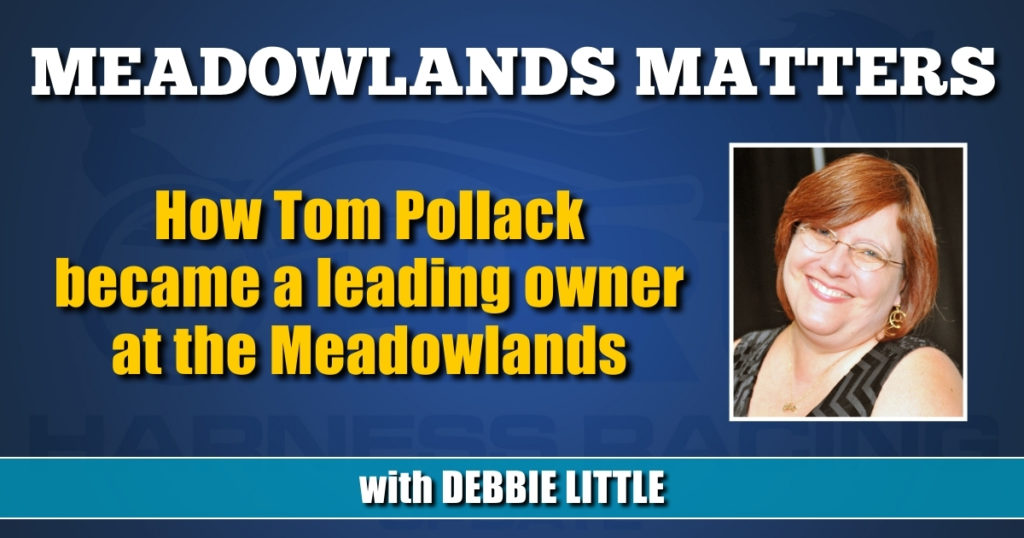 How Tom Pollack became a leading owner at the Meadowlands

The evolution of a tremendous partnership between owner Tom Pollack and trainer Jeff Cullipher has the two at the top of the Meadowlands’ standings.

There’s no question that owner Tom Pollack has come far and fast, both in the sport and at The Meadowlands.
Since his partner, Jeff Cullipher, currently sits atop the Big M trainer standings, it’s not a stretch to believe that Pollack is the track’s top owner, even though that statistic is not presently available.

Through April 15, the team of Pollack and Cullipher have 32 wins, twice as many as trainer Ron Burke.

Unlike Cullipher, 49, who was raised in the business, Pollack, 51, was not. However, growing up near Pittsburgh, he was always a big fan of his home track, The Meadows.
Pollack, the owner, president and chief financial officer of a mail delivery pharmacy, got into the business in 2010 with trainer Randy Bendis in a partnership with a few other owners at The Meadows. 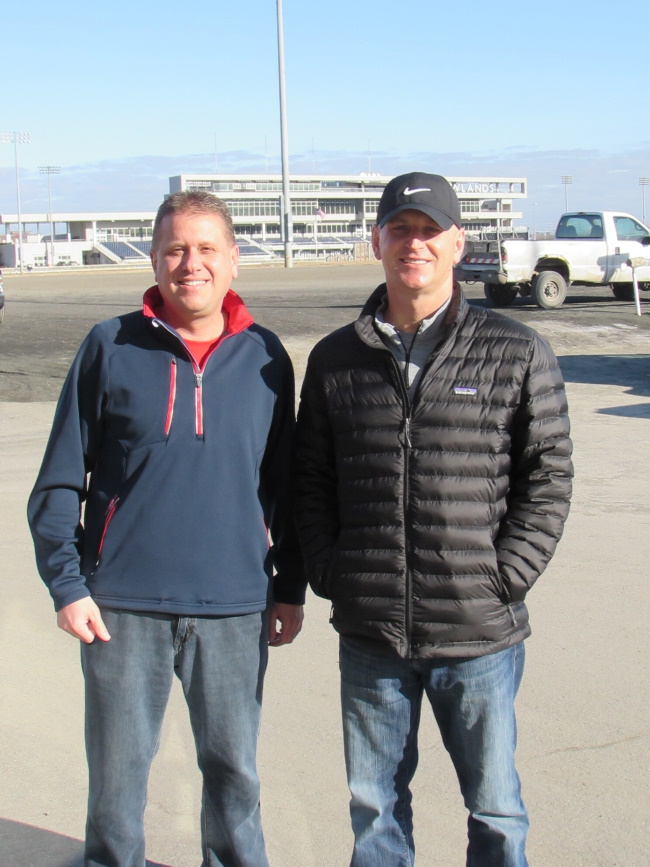 Randy’s owners told him that they were all making a little bit of money, which appealed to Pollack.

“And I thought this could be a great place to start to be able to have a hobby that made a little bit of money,” said Pollack. “Who wouldn’t want to do that? To have something to go and watch and follow and if it paid for itself, it was a win-win. The first couple of years I was happy just to be asked to participate and be part of a horse and then as they got to know me a little bit better and knew that I followed closely, I was able to suggest some horses. And then all of a sudden, they started looking to me a little bit more and more to try to find horses and it kind of took off from there.”

Pollack had been with Bendis about four or five years when the partnership sent a couple of horses to Cullipher and his dad in Indiana.

“We actually won an aged mare sire stake and that got my wheels turning that, hey, [Cullipher] knows what he’s doing and he doesn’t have a lot of horses so he was somebody to latch onto and have him grow with me,” ,” said Pollack.

Since Bendis was not looking to grow the way that Pollack was interested in, Cullipher became his go-to guy, although Pollack will never forget his roots and still has horses with Bendis and partners at The Meadows.

“Our vision, passion and desire were aligned from the get-go and that usually makes for a good partnership,” said Pollack of Cullipher.

For Cullipher, the partnership and friendship with Pollack came along at exactly the right time.

“Never in my wildest dreams did I expect to go from one horse to pretty much 70,” said Cullipher. “He’s one of my best friends, obviously. He’s changed my life.”

Their partnership quickly became successful, but as the stable grew, they were outgrowing Hoosier Park, having too many of their horses racing against each other. Pollack’s solution was to look to the east.

“I always wanted to race a bunch of horses at The Meadowlands on a Saturday night. Who wouldn’t? That’s the mecca of harness racing,” said Pollack. “And at the end of 2018, we sent 10 horses out there to start and just have kind of grown it from there to where we’re racing 14, 16, 18 horses on a Saturday night at The Meadowlands and that’s what I aspired to do when we started up so we’re getting there with some of our goals, I think.”

Those 10 horses have grown to 31 and since they still have almost 40 with Cullipher in Indiana, their east coast stable needed a manager.

“It was a big jump for us and a big jump for Jeff to lose some control of the horses and open this barn out there, because you can only be in one place at a time,” said Pollack. “So, we agonized over who we were going to get to oversee this operation that would work well with [Jeff] and follow his program and do what he wants to do when he’s not there every day to oversee it.

“Then one day [Jeff] called and said, ‘I think I might have thought of somebody’ and it was Rico [Robinson] who he knew from Kentucky in the early days. He said, ‘He’s the guy I’d be most comfortable with’ and I said ‘Great, I look forward to meeting him.’ And I can’t say enough about him and he’s become a good friend. I love having him on the team and, obviously, he’s the point person out there when Jeff’s not and the results speak for themselves. He’s done a tremendous job.”

Robinson has nothing but respect and appreciation for both Pollack and Cullipher.

“They’re the best,” said Robinson. “I don’t know how to explain it. They’re just such good people. They’re so good together and they’re so good to the help from the grooms to the trainers, Tom cares about everybody. He wants to know how they’re doing and are they happy. He asks me that all the time. You don’t hear owners say that.

“I’ve been in the business a long time and I’ve never met an owner like him, and Jeff’s the same way. They care about their people. I’m so fortunate to be able to work with two people like that. I tell them all the time how much I appreciate it.”

Pollack is friends with both Mark Weaver and Ron Burke and a lot of what he, Cullipher and Robinson have done is modeled off Team Burke, just on a smaller scale.

“I just got a text [Sunday] from Mark saying congrats on a huge weekend,” said Pollack. “So, they’re glad when we do good and we’re glad when they do good. It’s pretty cool that two groups that live 15 minutes apart in a suburb outside of Pittsburgh got on the national level and are doing well.”

Weaver has known Pollack for 10 years and is not surprised at all that he’s doing as well as he is so quickly.

“I would always tell people, if you buy the right horses and race in the right classes, it’s not brain surgery,” said Weaver. “If you do the right things, harness racing is one of the best investments in the world. And people would say, ‘You’re crazy, you can’t make money.’ And the person I would always go to as my proof, so to speak, would be Tom.

“And it doesn’t mean that all you have to do is spend money on horses because there are plenty of people that do that and they’re not buying the right horses. But if you understand the game and buy the right horses – it’s not easy but it’s not that hard, either – you can certainly make money and I love to use Tom as my example as somebody who basically does that. It’s turned into where he’s competition for me which I like, it’s good. There are horses now that he may buy that we would have bought, but I’m thrilled to see him having success.”

In both 2019 and 2020, Pollack Racing LLC and Jeff Cullipher were the top owners at The Meadowlands.

“I’m very competitive and up until this point, it’s usually us doing the beating,” said Weaver. “[Pollack’s] kind of like the underdog but he’s becoming a serious player, so I don’t know, I may have to cut off my trade secrets here pretty soon.”

Last Saturday night, Pollack started 14 horses at The Meadowlands. Twelve of them got checks with three visiting the winner’s circle.

“It’s super cool, and I’m sure it’s super cool for [Jeff] to be this guy from Kentucky and then the midwest and all of a sudden to be touted as the leading trainer at The Meadowlands is really some accomplishment and I tell him that and I tell Rico that all the time. I certainly don’t want to forget him because it may be Jeff’s name out there as trainer of the week, but I always congratulate Rico, too, because I know he’s the one loading the trucks out there.”

“From the harness racing sense, I think he means I always want to be looking for the next horse and getting new blood into the operation,” said Pollack. “I always feel like when we go a month or two and haven’t bought anything or turned anything over, even though we’re not big sellers, then kind of the world is passing us by.

“I think we’ve done a good job over the last couple of years of just trying to buy quality horses. If you don’t give the trainer something to work with, you’re probably not going to be overly successful. The price of buying a good horse hasn’t decreased even though we’ve just gone through a pandemic. The old adage you get what you pay for is true here in harness racing, too. When you’re buying seasoned horses, the bargains are harder to come by now.”

Pollack said he plans to be in town for the races this weekend to see the 12 he has racing on Saturday night at The Meadowlands as well as Alexa Skye in the $232,800 Blue Chip Matchmaker on Monday night at Yonkers Raceway.

“What I’ve learned owning my own business or day-job business, is that you demand excellence and have got to be willing to pay for it. So, everything we do, we try to do in a first-rate way and we try, I hope, to be good guys,” said Pollack. “And we try to pride ourselves on doing the right thing. I think the world of Jeff, Rico and Randy. I owe them a lot. They’ve made this hobby of mine, or business, or whatever you want to call it, super enjoyable because we’ve done pretty well.”