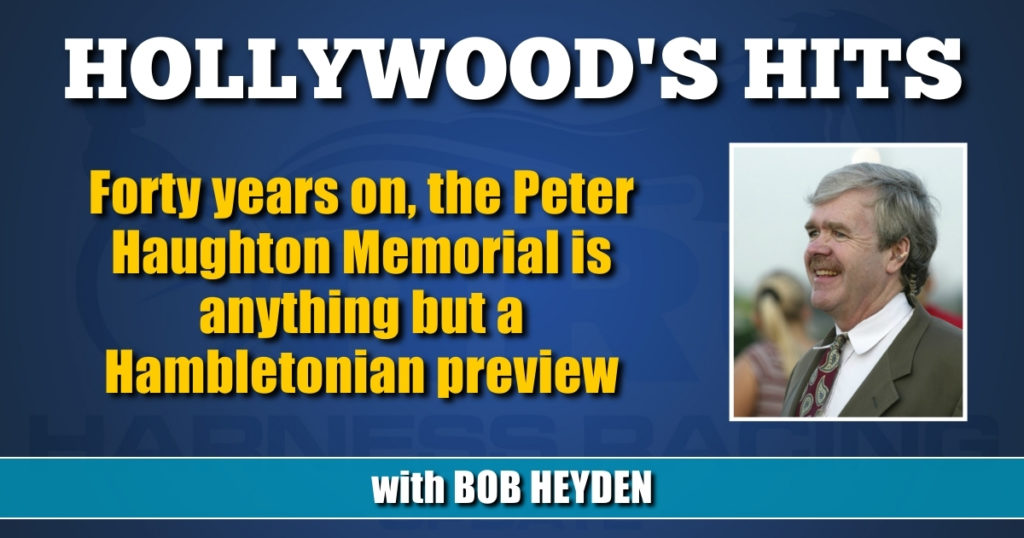 Forty years on, the Peter Haughton Memorial is anything but a Hambletonian preview

In 1981, the year after the tragic passing of 25-year-old Peter Haughton, a freshman trotting colt race was named in his honor. It quickly became the biggest event for 2-year-old male trotters, an honor it would later share with the Breeders Crown.

This year marks the 40th anniversary of the Peter Haughton Memorial, the only 2-year-old trotting stake to ever go for $1 million twice — 1984 (Another Miracle) and 1985 (Express Ride).

After going in three divisions for the one and only in 1981 — each for $75,000 — the next eight Peter Haughtons were the eight richest 2-year-old trotting colt events ever held prior to the inaugural $1 million Mohawk Million in 2020.

Yet, a funny thing has happened throughout the history of the Peter Haughton — and especially in its first 25 years — it became anything but a Hambletonian preview.

Here’s a closer look at that fateful quarter century from 1981-2005 for this prestigious event:

During that stretch, never once did the winner of the Peter Haughton comes back to take the Hambletonian at 3.

Never once did the winner of the Peter Haughton come back and take the divisional title at 3.

Eleven Haughton winners did not even make it to the Hambletonian final. Of the 12 winners that did, not one finished first or second.

Only Enjoy Lavec (1998-1999) won the Peter Haughton and finished on the board in the Hambletonian (third to Self Possessed and Angus Hall).

During that same time period, the winners of the Haughton’s female equivalent, the Merrie Annabelle, made more money in the Hambletonian. That’s right, even though only four Merrie Annabelle winners gave it a go in the Hambletonian, three finished third overall, good for $404,764 — Winkys Gill 1982-1983, Britelite Lobell 1985-1986 and Peace Corps 1988-1989. Haughton winners banked just $320,000 in that same quarter century.

One died — Dancers Crown dominated in 1982, including the Peter Haughton, but was lost the month prior to the 1983 Hambletonian.

One retired — Donerail, the 1994 Peter Haughton winner, called it a career the month prior to the 1995 Hambletonian paving the way for John Campbell and Tagliabue to find a path to Hambletonian glory.

Tom Ridge dominated in the 2003 Peter Haughton but came up well shy as the favorite in the 2004 Hambletonian, finishing eighth in a race won by Windsongs Legacy.

Remember the shock of Father Patrick in 2014 as the big Hambletonian favorite going offstride at the start and finishing last? Oh yes, he won the 2013 Peter Haughton.

Remember the outstanding Wesgate Crown? The first and only trotter (McWicked (2014 and 2018) did so on the pace) to win a Breeders Crown four years apart? (1993 & 1997) Wesgate Crown’s jinx extended well past just the Hambletonian where he broke and finished eighth in his heat. He was winless at 3.