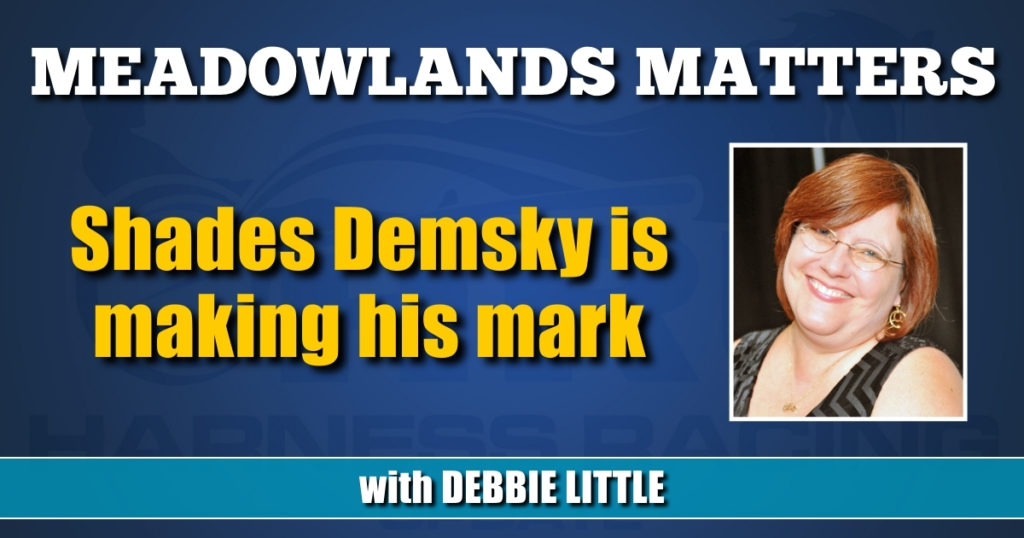 Shades Demsky is making his mark 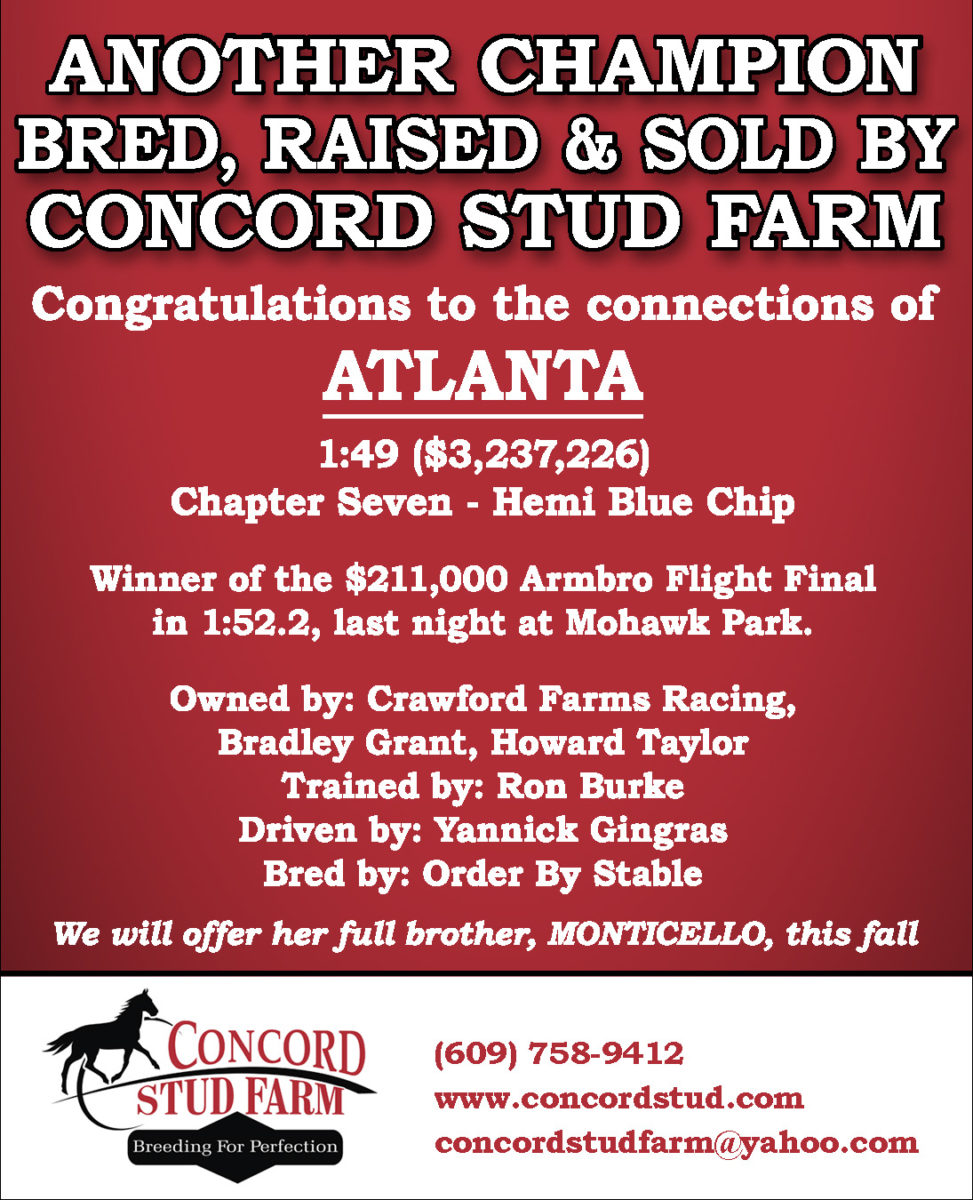 Andrew “Shades” Demsky may be the new kid on the block, but that’s okay, since he’s got the right stuff.

Demsky, 33, is the first to admit that his harness racing background is limited, but what he lacks in experience, he makes up for in dedication.

“What I always appreciated about Shades was his passion,” said director of racing for Caesar’s Entertainment Gabe Prewitt, who worked a Red Mile meeting with Demsky in 2014. “He does his homework. He does a lot of research and I know how much he applies himself when he’s working.”

It was Prewitt who introduced Demsky to Meadowlands chief operating officer and general manager Jason Settlemoir at the Harrisburg Sale in 2019. Settlemoir was apparently familiar with Demsky’s work at the Pennsylvania Horse Racing Association (PHRA) and at Tampa Bay Downs, when he was doing on-air TV handicapping.

Demsky had left the job at the PHRA at the end of 2019 and once the pandemic hit his options were limited until he received a call from Settlemoir.

“Jason calls me out of the blue and offers me a job at Tioga, and how do you say no?” said Demsky. “That’s exciting.”

Demsky was hired as the assistant race secretary and announcer at Tioga Downs, and even though he was not an expert at either job, he was willing to put in the work to become one.

“The more you learn, the better, so I’m never going to say no to learning something new,” he said. “It took me a long time to find out what flushes out cover means. Flat out, the Internet does not have that. You cannot find, ‘So and so flushes out cover.’ Some terms just don’t exist on the Internet. There are just things you have to ask people when push comes to shove.”

Hall of Famer Wally Hennessey got to know Demsky during his time at Tioga last year and was impressed with how quickly he caught on to our sport.

“So, that tells me that’s somebody who’s willing to listen and learn,” said Hennessey. “He wasn’t just there for a paycheck. This was something he wanted to pursue in life and he’s actually gaining traction way faster than most people would.

“That’s what we need in the sport. Young blood that has a deep interest in what we’re doing. He wants to know all aspects of the game and that can only bode well for us in the future. We’re going to be a better sport because of him.”

Demsky, who grew up on Long Island near Belmont Park, graduated from Hofstra University in just three years with a 3.92 GPA and a degree in Radio, TV and Film production.

He put that degree to good use for four years working production jobs for three different minor league baseball teams, but it was horse racing – not baseball – that Demsky aspired to be part of.

“My grandfather was a big horse player,” said Demsky. “He was married to Roosevelt until Roosevelt closed and they wound up moving to New Jersey and Freehold was his spot until Off-Track Wagering became a thing. He never got to see me work in harness racing, which I think he would have loved, because that was his thing.”

In 2013, Demsky took a job at Tampa Bay Downs in their production room, but he still longed to watch the races live.

Later that year, Demsky saw that Presque Isle Downs in Erie, PA, was looking for a simulcast host.

He went to Margo Flynn, Tampa’s vice president of marketing and on-air handicapper, to see if she would put in a good word for him.

“And her response was, ‘I like you, but can you even do that?’” said Demsky. “So, I said, ‘Sure.’ She said ‘Okay, tomorrow you’re doing the last race on camera.’

“So, I had to borrow a dress shirt to go on air and I did my little spiel and she said ‘You did okay. Do it again.’”

“We got to the end of the season and she said, ‘Next year, would you like to come back and take over for me?’” said Demsky, who worked at Tampa a total of six seasons.

It was during his stint at Tampa that Demsky received his moniker.

While doing his pre-race analysis, he kept looking down to check his notes and the girl running camera said, ‘Why don’t you just put your sunglasses on?’

But then somebody on social media belittled him, referring to him on Twitter as “that Shades kid” and “that Shades guy”.

“So, I basically took that negative and went to my boss and said I designed a shades logo for myself, that I still use today, and I said, ‘Can I run with this?’” said Demsky. “And she said, ‘Sure try it.’ And it kind of stuck, and I like it.”

Anyone who follows The Big M on social media are well aware of what Demsky has done since becoming the racing and simulcast manager at The Meadowlands when Tioga’s meet ended last year.

In addition to being an on-air analyst on “Racing from The Meadowlands”, Demsky has capitalized on his marketing background to come up with “Holiday Games”, “Meadowlands Mean Tweets” and “Big M Game Night.”

Demsky’s first of three Holiday Games segments happened on his first night doing paddock interviews right before Thanksgiving. And even though some drivers may have run from him, others at least, gave him a chance.

“Where they might have been, ‘What is this crazy guy in sunglasses doing?’ initially, [now] they kind of see I’m not that bad,” said Demsky. “I think they see I’m not going to make them look bad in the final product.”

A new edition of Meadowlands Mean Tweets came out April 1 and got a great reception as one of the most viewed videos they’ve had between their YouTube and Facebook view accounts.

“I think he has a fresh perspective on that stuff,” said Tioga stakes administrator Nick Salvi. “The mean tweets is not something that appeals to me personally, but I’m not the target, and people do seem to like it. It is a transition from thoroughbred to standardbred and truth be known, he’s made great strides in a short time doing something that you can’t really teach somebody to do.

“He’s willing to do whatever you ask, and he applies himself. He has imagination and maybe a different perspective than what we’re used to, us standardbred regulars.”

“I know Hollywood Game Night was a huge show for like five years,” said Demsky. “So [I thought] maybe I could have these guys play games that everybody knows. And it was hard to convince them to do this at first.”

For Game Night, Demsky made a custom Guess Who board, put bobbleheads on Rock’em Sock’em robots and made custom Go Fish cards all to try and market our drivers and hopefully get more people interested in our sport.

When it comes to Demsky, people seem to agree that his future’s so bright, he’s gotta wear shades.