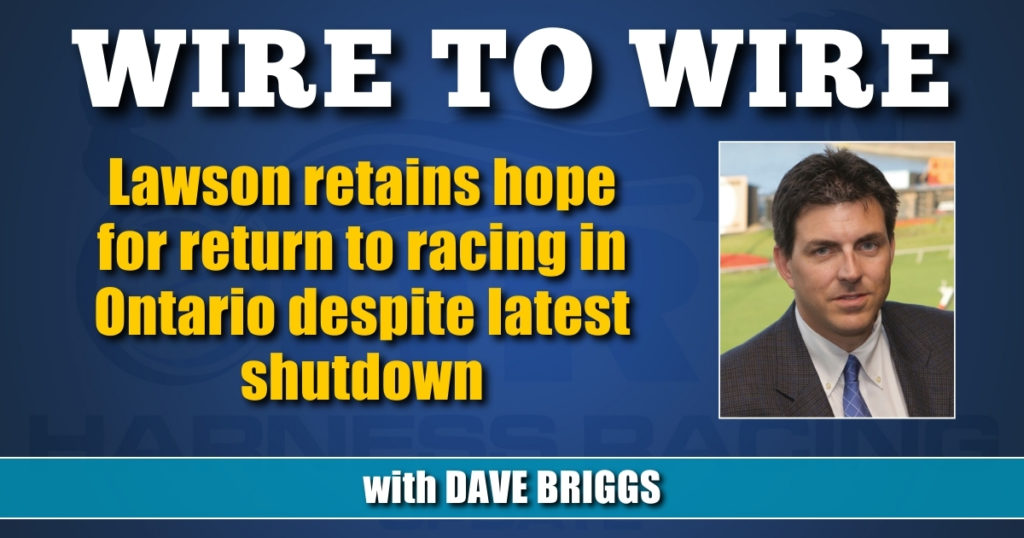 Ontario’s third province-wide shutdown due to COVID-19 will halt racing after today, but Woodbine’s CEO believes local health authorities will approve a return to racing before the month-long lockdown ends.

If you can, just for a second, put aside the inconsistency, startling lack of logic and sheer idiocy of which businesses will remain open and which ones will be forced to close in Ontario’s latest COVID-19 shutdown orders set to begin Saturday (April 3) and last at least 28 days.

Yes, the rules and zones and colors keep changing in Ontario as the province enters its third lockdown/shutdown/hiatus or whatever new name the politicians have dreamed up.

Yes, many businesses, including horse racing, are going to take another beatdown as Canada continues to lag behind most of the western world in delivering vaccines to its citizens.

Yes, it makes absolutely no sense to ban horse racing, an outdoor sport that has operated safely in Ontario — without one known positive COVID-19 case related to its activities — since the pandemic began.

But at this point, with horse racing ranking extremely low on the list of provincial priorities — despite its notable economic impact — it’s also mostly wasted breath and time and it doesn’t help people make crucial decisions about their livelihoods.

Instead, it’s important to figure out what can be done to get horse racing back as quickly as possible. Woodbine CEO Jim Lawson retains some hope. Though, allow him to be frustrated like most of us.

“Now they are allowing golf. I’m a golfer and looking forward to getting out golfing, but you and I both know that when you go out to the golf course, you might show up with your mask on, but there aren’t any real strict protocols and procedures like those you’ve seen at the racetrack with no spectators at the racetrack… it’s very frustrating and I share the frustrations of the racing industry that people can go out and golf, but these people aren’t allowed to go outside and earn a living in a business that has had zero transmission of Covid. It’s extremely frustrating,” Lawson said as he kept one eye on the province’s press conference announcing the shutdown. “It’s really in some ways hard to watch. They just had a question about small restaurants and why they are being picked on… They’ve already been closed and they are not the source of the problem. And here I am thinking, ‘Well, they are closing horse racing down again, but there’s been zero transmission at the horse racing tracks’ and it’s frustrating.”

That said, Lawson believes he is making some headway with provincial officials that could allow horse racing to return much sooner than 28 days.

From his discussions with officials as recently as Thursday morning (April 1) Lawson said the province is, “prepared to support live racing, provided that the chief medical officer of the local health authority is supportive and onside with approving live racing going ahead. So, that gives us a window of hope.

“As of today, we have contacted Halton Health relative to Mohawk and are expecting to have a discussion with them… I’m not so sure it’s been set up yet, but they are prepared to talk about it. We have explained to them that there may be an opportunity to commence racing and that the province will support it, as long as the local health authorities are onside… We delivered a package to Toronto Public Health this past week (in relation to Woodbine Racetrack being able to open its thoroughbred season on April 17 as scheduled). I personally had very constructive discussions with Toronto Public Health last week and this week and I expect we’ll be able to have the same with Halton Health.

“I’m not giving up… The good news is they are talking to me, they are listening to me and generally I would say that they are supportive.”

Lawson is well aware that the situation is dire. This is the third shutdown of racing since the pandemic began. Racing was shut down for six weeks in April and May of 2020. Most recently, racing was halted for seven weeks beginning just after Christmas.

“On the standardbred side, my big fear — as it was in January and there’s some truth to it — is that people are going to pull out of the province and go elsewhere. We’ve already had discussions with standardbred trainers that are expecting to leave. The economic damage done to the racetracks and to the industry is huge and, in some ways, might be irreparable. We’ll never make that back, for one, and this is not like people closing down temporarily and then coming back, we might lose those horses for the whole year. It’s going to do big damage,” Lawson said.

“On the thoroughbred side, we’ve got 1,300 horses (at Woodbine) and we have over 2,000 stall applications. They’ve stopped shipping in. We’ve had a number of calls from people who aren’t coming up now. It’s going to do irreparable damage to the economics of Woodbine and that does real damage to the whole industry in this province, if Woodbine can’t generate income.”

“With the whole province, we’re talking 15,000 or 20,000 people (employed in the horse racing business). They make a lot — and I believe them when they say it — about mental health… When you start to consider the mental health issues coming from people being off work and out of work and being frustrated at not being able to earn a living there’s so many issues that come with that.”

Lawson also continues to speak about horse racing’s, “impeccable record, especially when you’re talking about Mohawk… We’ve operated there for the better part of 10 months at Mohawk, four to five nights a week, with zero transmission of COVID. It’s an outdoor activity with strict protocols and strict procedures. It’s been proven and established that it is a safe activity. It’s been allowed to operate in the United States and, for that matter, around the world in France, the United Kingdom, Ireland and Australia with great success as an outdoor activity.

Therein lies Jim Lawson’s hope and, by extension, the hopes of an entire industry in Ontario.

In a time when facts and science are allegedly driving policy, he believes logic will ultimately win out.

Given the lunacy of recent decisions, forgive me if I find that tough to believe, but I hope he’s right.