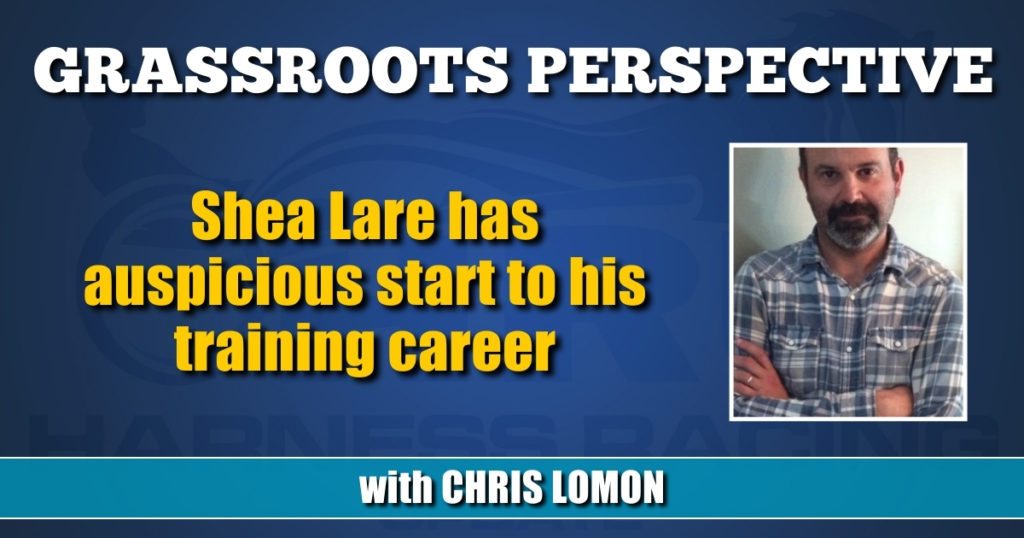 Shea Lare has auspicious start to his training career

The son of veteran trainer Kevin Lare has scored three wins and a second in his first four starts.

If the start of his training career is any indication of what the future holds, 19-year-old Shea Lare has plenty to look forward to.

When the first four starts of your training career yields three wins and a second, it would be easy to get swept up in the moment.

But that’s not how the teenager from Dover, DE, is reacting to the early success.

“I’m grateful the way things have started out, but I’m definitely not getting carried away with it,” he said.

It was perhaps fitting that Lare put in a claim on Stick With Cramer, a 6-year-old son of Art Major, this past Valentine’s Day at The Downs at Mohegan Sun Pocono.

For the young conditioner/owner, it was love at first sight, so to speak.

Impressed by the pacer’s stat sheet, on-track demeanor and consistent chart lines, Lare was looking forward to Stick With Cramer’s first start as his new owner.

Lare had modest expectations ahead of his first race in the training ranks, simply hoping that his veteran campaigner would pick up a check.

When the field straightened for home in race eight that evening, Stick With Cramer was second, just a head behind the leader. In the race bike, Marcus Miller was urging the bay gelding on as the wire drew ever closer.

If Lare was getting caught up in the thrilling front-end duel unfolding in front of him, he certainly wasn’t showing it, at least not outwardly.

“I was keeping my emotions in check,” said Lare, son of longtime horseman Kevin Lare. “I’m not very outspoken or loud, so I was able to just stay within the moment.”

He was unable, however, to resist the big smile that emerged as Stick With Cramer eked out a head score in a time of 1:55.

Lare couldn’t have scripted it any better.

“That would have been the perfect way it played out in my mind. I don’t think there could have been a better way. It was amazing. My first start and winning it… all I was hoping for was a check. I can say that when he crossed the wire first, I was pretty excited. The emotions kind of came out then. I really couldn’t help it. It felt like a dream for a while. So, winning my first race, it’s a story that I can always have to tell.”

After a second-place finish in another Game of Claims leg the following week, Stick With Cramer, on March 7, in the $15,000 Game Of Claims Championship for $7,500-tagged horses, was flying late again with Miller in tow.

The déjà vu moment wasn’t lost on Lare, who proceeded to watch the number of the only horse he has in his barn flash on the infield screen after the photo finish.

“It was just another great moment. He really gave everything he had and it was a great drive. I was just speechless. Just like that first win, it was really close, but he got the job done. I got a lot of texts and call from people after my first win and just as many this time around. That really meant a lot to me.”

Perhaps the most impressive thing to come out of Lare’s sizzling start is the manner in which he has carried himself.

Humility is a hallmark of the teenage horseman’s personality. So, too, is the ability to see his career from a realistic lens.

“I don’t want the good times to end, and obviously, I want to keep winning, but there is that thought that eventually it will come to an end. Sooner or later, your luck runs out. The key is to come to the barn each day to work at being successful and doing everything you can to prepare your horse. I can say that it will only make me work harder. I won’t take anything for granted and through good times and bad, I’ll have the same approach. I’m committed to getting better every day.”

Working for his father, who has accumulated over 1,500 wins throughout his impressive training career, has been the ideal classroom for the younger Lare to learn his standardbred lessons.

He’s happy to call himself a student of the game.

“My dad has about 20 horses, so you learn a lot and you learn something new every day. I’ve learned so much already from my dad, but I think being patient stands out as the biggest thing so far. My dad is a very patient person and things don’t really get to him. He doesn’t get upset if a horse races poorly. He kind of puts it on himself and looks at what he can do to correct things. He told me that good things will come if you put in the work, stay patient and keep an open mind. He told me time and time again that he learns something new every day. That’s what it has been like for me too.”

Lare doesn’t just have a solid rapport with his father when it comes to the racing life. Stick with Kramer has been an ideal colleague, too.

“He has a great personality, he’s great to work with and doesn’t do a thing wrong. I really like this horse. I have no complaints at all. He’s happy, he has his ears up all the time, he never tries to kick or bite, and he’s great to jog. He’s easy on himself and he’s so professional on the track. I couldn’t ask for a better horse. I feel very fortunate.”

The pacer with 90 starts to his name has a few things in common with his trainer/owner.

“We might have the same personality,” said Lare, with a laugh. “He’s not a horse that gets excited. He just loves what he does. I haven’t just spoiled him when he’s won. I’ve spoiled him since the day I got him. He likes his rubs and extra carrots, and I’m happy to give him whatever he wants.”

As for what Lare wants down the road, a barn of his own and driver colors could be in his future.

“I would say my goal for this year is to get a stable of five or 10 of my own horses by the end of the year, and still be doing as well as I am now. I’d like to keep building my own stable in 2021 and ultimately, venture out from my father. In a few years, I’d like to begin driving. Hopefully, I could do that for other people and keep a stable of my own. I love training and I know I’ll always have a stable of my own, driving or not.”

He’s not putting any pressure on himself when it comes to his career.

“I guess I’ll just see where it all takes me.”