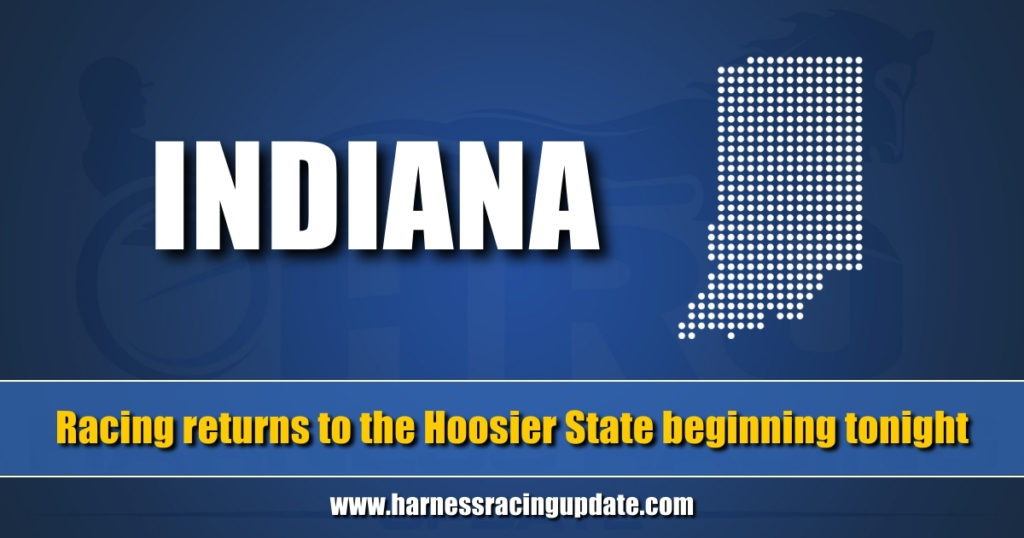 Harrah’s Hoosier Park in Anderson, IN opens its 160-day 2021 meet tonight.  The schedule features plenty of stakes events, including a few new ones.

One year ago, Indiana horsemen were unsure when racing would begin in the Hoosier State. The COVID-19 pandemic created an 82-day delay, and when racing began, the schedule was reduced to 111 dates. This season, Harrah’s Hoosier Park is offering a full 160-day harness meet, kicking off tonight (March 26) and Saturday, March 27. Rick Moore, Hoosier Park’s vice president and general manager of racing, is ready for the sound of thundering hooves to return to the Anderson oval for its 28th season.

“What a difference a year makes. In a way it seems like yesterday, in a way it seems like 10 years ago if you think about all we’ve gone through in the last year,” said Moore. “It looks like on Friday night and Saturday night we’re going to have some very competitive racing. We had 168 in the box for Friday and 150 for Saturday. We’ve still got a lot of horses to get qualified. That bodes well for us.”

Hoosier Park will begin the season with two nights of racing, offering a pair of programs featuring 14-race cards, each kicking off at the customary 6:30 p.m. first post. Three days of racing will be offered the next week, and the track will slowly expand to five nights of racing each week by mid-May. This year, Tuesday programs have been dropped in exchange for Sunday racing. Other changes focus on the wagering menu, where a Pick 3, Pick 4 and Pick 5 have been added, with carryovers on the Pick 4, Pick 5 and Superfectas. Add in a guaranteed $10,000 Pick 4 each Thursday and the guaranteed $10,000 Hoosier High Five four nights a week (excludes Saturday) and Moore feels Hoosier Park has much to offer the betting public.

“Everyone wants to make a big score, everyone wants a big payoff. When you guarantee a pool, people want to know there is value in those pools. That’s what the bettor wants,” Moore said. “They are pretty savvy. They aren’t going to wager unless they know there is value, at least an opportunity for value. I think with the guaranteed pools and carryovers, that provides value to the bettor. At the end of the day that’s what we’re trying to provide, value to the bettor.”

The racing landscape is competitive, but Moore feels the Hoosier Park product can shine in the marketplace. The key is to have an attractive product, both in the quality of racing and wagering menu.

“There are a multitude of options out there. You have to have as attractive a product as possible. It goes for the racing out on the track, to the wagering menu that you present to the bettor,” he said. “Our signal is going to go out to over 500 outlets. We are on the schedule down in Australia, so I’m very excited about that.”

“Your program has to be balanced. I’ve always been a believer in that,” said Moore. “You really want to have a program that gets national attention. With our open stakes, we’ve definitely done that. We load our open stakes toward the last third of the year. We’ve seen the best trainers, drivers and horses here at Harrah’s Hoosier Park, and that’s a source of pride for all of us in Indiana that are involved in the harness racing industry.”

Race secretary Scott Peine has added new stakes on an already impressive calendar with the Phil Langley Memorial Trot for sophomore colts and geldings. The event, advertising a $100,000 estimated purse with a $20,000-est. consolation, will be contested Friday, Sept. 24. Peine has also added the Thanksgiving Classic Series, four divisions for sophomore pacers and trotters, with $60,000-est. purses for each division, to be held on Thanksgiving day. The series extends opportunities for 3 year olds that starts with the Pegasus and Circle City in October and Star Destroyer in November. In the midst of the group of races, sophomores can battle in the Monument Circle, USS Indianapolis Memorial, Carl Erksine and Crossroads of America. The Thanksgiving Classic Series received 274 nominations in the first year, while the Star Destroyer, previously held earlier in the season, saw a 73 percent increase in nominations for 2021.

“It makes a great series to showcase Grand Circuit caliber horses,” Peine said. “It provides an opportunity for a good regional horse or a horse that might not be Breeders Crown material.”

The Hoosier Cup was once the richest harness race in Indiana, an open stake whose past winners include Dragon Again, Real Desire, World Of Rocknroll, Jr. Mint, Skydancer Hanover, Total Truth and Mr Wiggles. Peine is bringing back the name, but the race is restricted to Indiana-sired 3-year-old colt and gelding pacers. No nomination is required for the event, but the entrance fee is $750. The Hoosier Cup carries an estimated purse of $75,000, with eliminations set for Sunday, June 27 and the final slated for Sunday, July 4. A $17,500-est. consolation is also offered.

“The name has a good history. We wanted to rebrand it and make it a good summer target for Indiana-sired three year olds,” said Peine. “The race falls between legs of the sires stakes. We have scheduled a lot of the stakes around the sires stakes program to encourage Indiana-sired horses to participate. Right now, after the Super Finals, these horses have the potential of five more races at Hoosier Park.”

The rebranding continues with Madison County, previously offering four divisions. Now for freshman colt and gelding trotters, the race is a single dash for the cash, with the 10 entries possessing the highest lifetime earnings lining up behind the gate. The stake carries an estimated purse of $100,000.

Hoosier Park’s changes extend to the announcer’s booth. Serving as the voice of the track since 1998, Steve Cross stepped away from the microphone at the conclusion of the 2020 season. Replacing Cross is Michael Chamberlain, a veteran of 24 years, including stops at Sam Houston Race Park, Evangeline Downs, Turf Paradise and Vernon Downs.