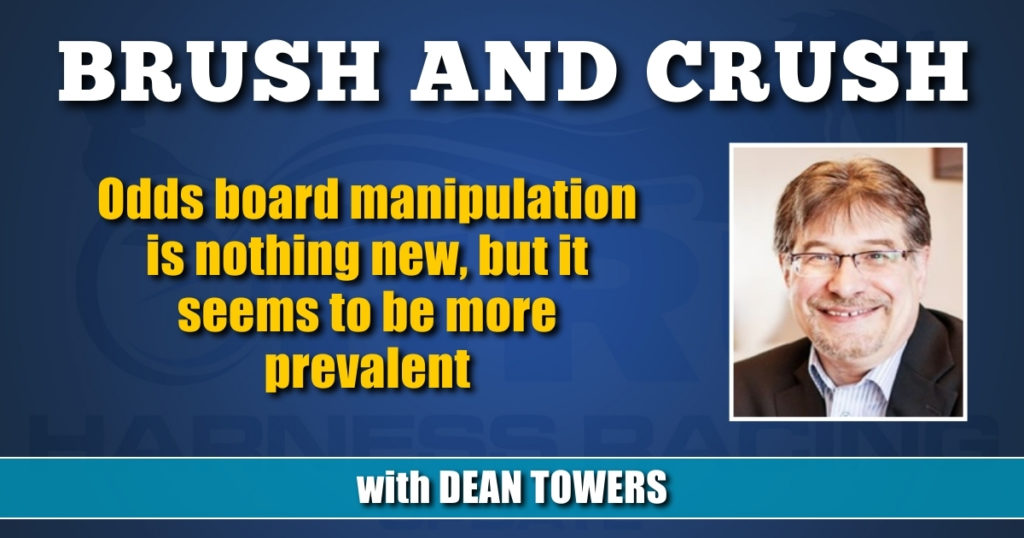 Odds board manipulation is nothing new, but it seems to be more prevalent

The best thing we can do is to recognize when this is happening.

If you’re a bettor, you’ve no doubt shaken your head from time to time when you see a horse open up at 1-9 and stay there until near post time. Then almost magically the odds board resets to what seems a rational array because the early money is cancelled.

The Raceway at The Western Fair District has been a poster-track for this over the past week or so. Horses have been opening with serious money (only in the win pool) almost each race. The track has been looking into it.

Although a (presumably) single player is doing this each race for no apparent reason, others have attempted pool manipulation for years in this sport for personal financial gain. The end goal was often to exploit the offshore sites to create trading or arbitrage value.

Years ago, this would occur even with larger thoroughbred tracks that were carried on Betfair. If a horse opened at 1-5 locally and stayed there for some time, the traders (and bots) at the exchange would inevitably move the price on the horse down to well below value. This was prime time for shorting, or to land a better price on the horse they really wanted to wager.

More recently in this sport, some bettors have been trying to create value with the same principle. I suspect you’ve noticed that for carryover pools, or the start of a Pick 5 on a small track, a horse may open with $1,000 on its nose. Often times the horse is one with no shot. This is a fake out, trying to get people to use the horse more than they want to, adding value to the other horses in the picks (or Super High Five). It’s all kind of creepy, quite frankly, but I have to admit it’s effective. Newbies attracted to a carryover (or others who do not play the track regularly) would be adding such a horse en masse, lowering the takeout on the ticket.

In this world, we seem to want the powers that be to “fix it,” but in the absence of trying to kick someone(s) out of pools like a game of whackamole, I don’t think there’s much of a solution, is there? When pari-mutuel was invented in 1907, money was bet at the home track, in tranches, at 5 per cent takeout. Today, money comes from me, you, trainers, owners, gamestoppers and thousands of others at many points of entry; most of it coming right at post time at 20 per cent takeout. Barring an overhaul – e.g. an exchange where this is minimized — it’s ripe for manipulation.

In my view, the best thing we can do, whether we’re a bettor, trainer at the track, or a driver who is checking the odds board as they post parade, is to recognize when this is happening. We should be checking the pools and looking for horses with win money only (little place or show); the exacta probables; the multi-leg wager payouts. If we’re watching the thoroughbreds, we should be referencing the Timeform US/DRF final odds simulator – an algorithm they created as a service to players. It’s hard to manipulate an educated market, and reading and recognizing is paramount.

For the powers that be, please be vigilant of this, and inform the public that you’re on it (as Western Fair did). The pari-mutuel pools might be archaic in today’s world, but ensuring they are sound and honest is a job that never should be shirked.