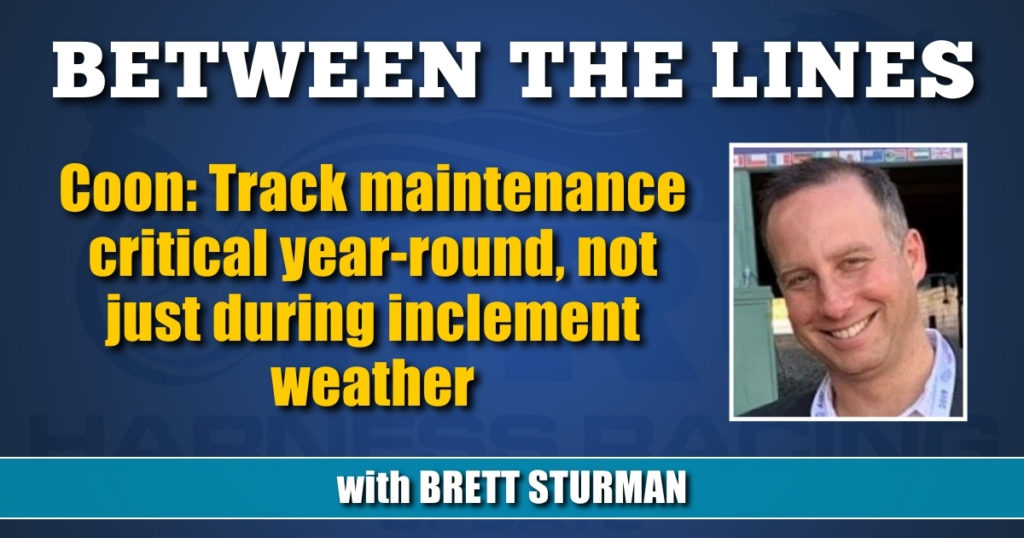 With cancellations due to poor track conditions appearing to be on the rise, expert track builder Dan Coon said more attention and resources needs to be put on maintaining proper surfaces year-round.

Tracks have seen accelerated cancellation rates of live race cards over the course of this winter. Many of these cancellations can be attributed fairly to forces beyond their control, but there remains an excess number of cancellations that could be perceived as less forgivable.

Such was the case last month when Yonkers lost nearly an entire week of racing due to an inability to timely remove snow from the track. Just this week, additional days of racing were lost at Monticello due to the thawing of the track as temperatures have predictably risen into March. The same reason was given for recent cancellations from Buffalo. The list goes on. Pocono lost its opening weekend in February. Even tracks that up until recent years wouldn’t have canceled under any circumstance, such as Northfield Park, has canceled multiple cards along with fellow Ohio track Miami Valley at the onset of inclement weather.

With the cancellations has come a rising level of frustration. It’s one thing to cancel the day of a major storm, but it’s another to prolong the cancellations for additional days and perhaps even worse, then try to race only to have the card canceled because of poor track conditions. That too, has happened at multiple tracks throughout the winter.

No one knows more about racetrack design and the challenges faced by winter than Dan Coon. Dan and his brother Greg are sons of the late hall-of-famer Chuck Coon and have built or at some point maintained most tracks in the sport, as well as currently consult for tracks all over the world. Dan’s expertise in racetrack maintenance is second to none.

For Dan, there’s certainly an understanding as to challenges that arise throughout a winter. Though, I don’t sense he would allow them to serve as excuses.

“Freeze-thaw cycles cause certain issues, but I came from a different era at Hawthorne Racecourse in Chicago in January,” said Dan. “And they would stop at absolutely nothing to get to a live race card. If there’s a foot of snow and you’ve got six hours to post, it can be dealt with, period. Back then, it would snow all day, and there would be racing at night. In Canada, Greenwood, Woodbine, Mohawk – there was a day when if you got a foot of snow, you got rid of it; simple. Whether it takes one loader, one grader and two dump trucks – or two graders, four dump trucks and four loaders in the afternoon – there are ways to deal with winter-time issues, but you have to make the financial commitment.”

Issues seen at this time of year, aren’t solely specific to when tracks need attention. A topic he speaks passionately about, Dan said, “If you’re asking for my opinion, more attention should be given to the track condition in December, in March, in August and in November. It’s not about winter or any particular season; it’s all of the above. There’s days in the middle of June where the track isn’t perfect, and that’s inexcusable.”

As a builder known for both speed and for safety in racetracks, the latter remains of paramount concern for Dan.

“Obviously, safety is first and foremost. Look, if a track is unsafe, I’ll be knocking on the door saying that this isn’t safe. If it’s after the fifth race and there’s washouts or frozen spots or some unsafe condition, then I’ll call them. And likewise, if it’s safe, I think we ought to go. And if it isn’t safe but I can delay for 40 minutes to see if we can improve things and make it safe, I think we ought to try it.”

He said he doesn’t believe the cancellations are a result of a lacking skill; in fact, he feels quite the opposite.

“I think there are some very, very skilled and motivated track curators. But if they go to the grader that’s 30 years old that they need to jump start and it takes 45 minutes to start, that’s not their fault. They’re very motivated and just like trainers and everyone else, they don’t want to lose days. And now we’re back to, ‘How much do you want to spend to get this right?’ There’s a will out there, we’ve just got to focus.”

One other topic that Dan said he takes exception to is the sometimes misleading track designation “sloppy” to the condition of a track.

“When it rains maybe an inch in two days of soft rain, it makes the track soft. But when it rains an inch in a half-hour the track gets hard. But they still call it sloppy. That doesn’t make sense to me. What it should be is wet-fast. How do you call a track with no cushion sloppy. If you’re a gambler and the Meadowlands comes up sloppy and they’re still going in 1:49, something’s up. It’s counter intuitive to call it sloppy when its’ really wet-fast.”

Asked about the role that track surface plays in fast times seen by horses today, Dan said, “I think the tracks that are elevated properly and the tracks that maintain the correct cushion, are the ones that are not only the fastest but the safest.

“Many people confuse hard with fast, and that’s a mistake. And we’ve proven that every day at Lexington, it’s surface is like a carpet. I own and operate the starting gate at the Red Mile, so I’m in every race. And if it’s too hard I’m pretty sure that I’m going to find out from the horsemen. They’re a valuable fountain of information. These are people that have a lot at stake and I consider it my job either as a consultant at different racetracks around the world, or as an official at places like the Red Mile or Delaware at the Little Brown Jug, to get their input. And most times they will tell you the truth.”

After this winter, a hard look should be given into what commitments and resources are needed to reduce lost days in upcoming seasons.