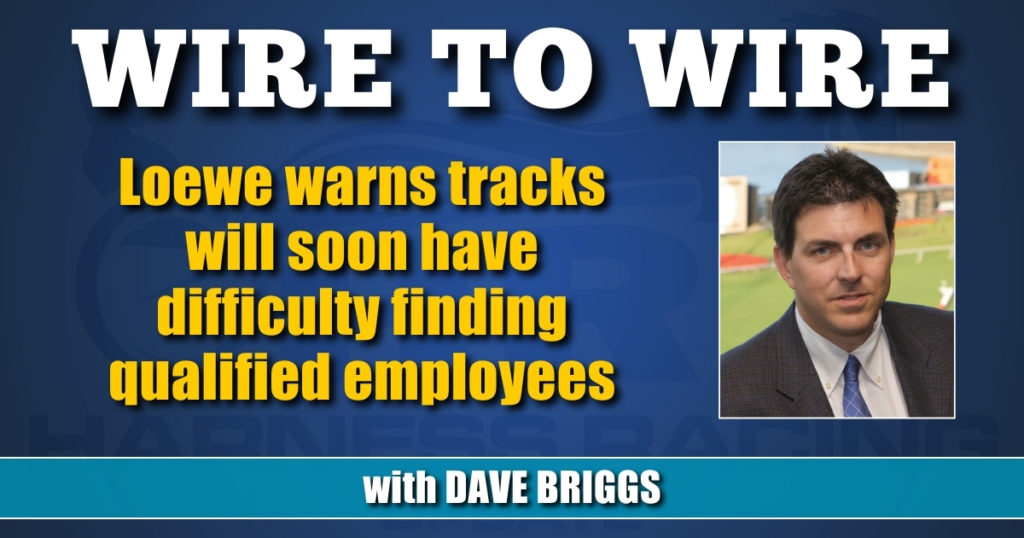 The recently-retired Penn National executive and former horseman said few people are qualified for specialized racetrack work and few are in the pipeline. He also has strong beliefs about who should pay to market the sport and the role of publicly-traded casino-run tracks.

On the long list of horse racing’s problems, Mark Loewe said one few people talk about is the lack of qualified people to work on the racetrack side of the business.

Loewe, 63, is the rare person with the experience to view the industry from both a horseman and racetrack executive’s perspective. He was in the game for 42 years in total before retiring in December of 2020 as the vice-president of racing for two of Penn National Gaming’s tracks — The Meadows near Pittsburgh and thoroughbred’s Mahoning Valley in Youngstown, OH. Loewe has also been a director with the United States Trotting Association (USTA) for three different districts.

“I’ve been preaching this for the last 15 years. Everybody keeps talking about their concern with the lack of horses or horse population shortage and I’ve always said that won’t be an issue as much as the lack of qualified people to do the jobs on the racetracks, from track maintenance to driving a starting gate or being a charter. You don’t see people lining up every day saying, ‘Pick me, I want to do that,’” Loewe said. “I don’t want to talk too much thoroughbred, but it’s even worse on the thoroughbred side. You’ve got valets, you’ve got people that have to stand in a starting gate with a 1,000-pound animal trying to knock their head off. I don’t see young people lining up saying, ‘Hey, that’s a great job.’

“We’ve even reached out a couple of times to universities, trying to get into the agricultural departments. It’s tough.”

Loewe also has strong opinions about the role of casino-owned racetracks and who should be responsible for marketing horse racing.

“I have to give (Penn National) credit, and I know a lot of people don’t believe it, but I still think that they are one of the few casino companies that does care about racing, but they also care about the economic model and bottom line. As a publicly traded company, they have responsibilities and have to make some hard decisions,” Loewe said.

“They wouldn’t have (Penn National’s vice-president of racing) Chris (McErlean) still there and myself working there that many years and hiring good people on the racing side if they didn’t have some faith in it. I had a racing budget and the casino had its budget. I had to work to make my numbers work and sometimes they did and sometimes they didn’t, but they certainly just didn’t ignore racing and let it fall into disarray.”

Loewe said what people need to realize is that most casino companies that own racetracks are publicly traded and have stockholders.

“Most of the stockholders don’t care about the racing, probably, but it’s a question of doing what they have a responsibility to do from a fiduciary responsibility while trying to continue to let racing be a part of their portfolio,” Loewe said.

That said, Loewe believes horsepeople should pick up the tab for marketing.

“This may be controversial, but it’s their product. As a permit holder, yes, we make some money and we’re able to have a casino, but we give you a venue for you to be successful and make money,” Loewe said. “Should there be some partnership involved? Yes, but it’s now different than when I was at a meeting in Ohio with the thoroughbred breeders. I said, ‘Okay, let me ask you a question, I’ll give you $100,000 right now, what are you going to do with it?’ And it’s ‘I don’t know.’”

Loewe said the money spent to market the casino must always be justified.

“They will only spend it if it generates enough revenue to justify it,” he said.

On the opposite side, Loewe said tracks are very much responsible for providing a safe environment for the horses.

“If you’re going to make changes, you can’t make changes that are going to have a negative impact on the horse population or the welfare of the horses,” Loewe said. “We were fortunate and (during the lockdown) I was able to fight for keeping my staff in those areas pretty much status quo… The last thing you want is catastrophic injuries and (have horsepeople) say, ‘Well, you haven’t taken good care of the track.’”

Loewe graduated from St. John’s University in 1978 with a degree in government and politics and two days later was working as a groom for Bill Popfinger. That fall, Happy Escort won the Little Brown Jug and his caretaker, Mark Loewe, was by his side in the winner’s circle.

Later, when training his own stable, Loewe had stints conditioning such standouts as Threefold and Goalie Jeff. He was also the original trainer of Fake Left, who was sold at the end of his 2-year-old season and went on to win the 1992 Little Brown Jug for trainer George Sholty and driver Ron Waples at 3.

By the end of 1991, Loewe had already moved on from training to become a TV handicapper at Pompano Park. He worked on the management side in the 30 years since, spending time at nine racetracks in all — Pompano (for 13 years), Prairie Meadows and seven tracks once he was hired by Penn National in 2010.

Loewe’s decision to retire came after a challenging 2020. He was furloughed for two months during the early days of the pandemic and then, once he returned to work, he had to deal with managing two racetracks with a skeleton staff.

“There were some real times of concern: what’s going to happen to Penn? How long can this go on? It’s not just in Mahoning Valley or Dayton or The Meadows, it’s 42 properties nationwide, with 13 racing facilities. If you shutter that for an extended amount of time, people get nervous and rightly so.

“There was a challenge of trying to keep the horsemen in business and giving them the opportunity to keep their horses fit and trained up and keeping backsides open without any revenues coming in to offset the expenses involved. Then, furloughing a lot of people with a lot of those people not coming back because… on the casino side, they were able to reopen but with limited capacity. So, obviously, you don’t need as many team members working if you don’t have any many poker tables open or restaurants open and things of that nature.”

All this while Loewe was mostly living apart from his wife, Janet Terhune, the executive director of the Harness Racing Museum and Hall of Fame in Goshen, NY.

“I had a life-changing event in 2018 when I married Janet,” Loewe said. “Living apart for a while was okay and then having the ability to spend two months at home when I was furloughed, it created a lot of dialogue as to whether this was the right time to step away. There’s so many other things going on in the business and how things are working and (issues concerning) the future (of the sport)… the check marks all seemed to line up that this was the right time.”

Most recently, while still working for Penn National, Loewe lived in Youngstown, OH, 10 miles from Mahoning Valley and a little more than an hour north of Pittsburgh. More importantly, Youngstown is about 400 miles from Goshen where Terhune lives.

“I can do it between five hours and 30 minutes and five hours and 45 minutes,” Loewe said of his many trips back and forth in his one-time, long-distance marriage. Today, he’s happily living in Goshen with Terhune.

Loewe has seen a lot of change in his 42 years in the industry.

When he started at Pompano, the Florida tracks had a 1,000-seat dining room that required reservations on weekends if you wanted to get a table.

“I was fortunate to train when they still had the training side (at Pompano), as well as the racing side. You’d be on the racetrack every morning with (Stanley) Dancer and (Billy) Haughton and (George) Sholty. Those are some pretty good memories, to share the racetrack with those guys and how much I learned just by watching,” Loewe said.

“From the racing side, obviously, when I first got involved there was no such thing as electronic eligibilities or electronic draw or any of the nuances that are available today just due to technology changes, so those are drastic change.

“Catch drivers also became a big thing during those years.

“Simulcasting was really in its infancy when I first got involved. As it turns out, what we thought was a great thing, wasn’t such a great thing for the industry now because the business model doesn’t work.”

Loewe also played a key role in the dawn of the racino era.

“I started at Pompano when it was still owned by the Van Lenneps, when it was privately owned and I was there when the first casino company bought in, which was Isle of Capri. After that, it was Prairie Meadows racino and basically everywhere else I went there was a racino or there was going to be one eventually.”

Loewe said he believes the horse racing industry will continue to shrink.

“I definitely think you’re going to see more contraction in racing. Some of these small operations are really going to struggle to survive because of all these things we’ve spoken about,” he said.

“By the same token, you can still have elite racing with great horses… Great horses will always bring people out… There’s always going to be a small group of people that are passionate about it and as long as legislation doesn’t make it more difficult to run racetracks – that’s my big concern with the Integrity Act, there’s so much of it that’s unknown in terms of funding and things of that nature. If it really becomes an economic burden on racetracks… it’s going to go through the racing commissions and they are going to decide and come up with some money to pay the bills.

“Going back to fiduciary responsibilities in gaming companies, if you start hitting them with more financial burden, I believe they will aggressively look to de-couple to get away from those expenses that aren’t necessary, in their opinion.”

Still, Loewe said it is “a great time to race horses” due to purse levels.

“I probably had the smartest racetrack executives to mentor me, first it was John Cashman (at Pompano) and then it was Chris McErlean.

“Then, the ability to build two new racetracks (Ohio’s Dayton Raceway and Mahoning Valley) from the ground up and be involved from day one in construction and design and getting feedback,” Loewe said. “I don’t want to beat my chest, but most people will tell you that Dayton’s paddock is the best paddock in the country.”

On a personal front, Loewe joked he spent January sleeping, but is now looking forward to enjoying all he loves about the industry with his wife by his side.

“Things are looking up that maybe we’ll be able to start going to racetracks again,” he said. “I definitely want to enjoy maybe having the opportunity to spend a week or two in Lexington and go to the sales again and look at horses, things of that nature.”