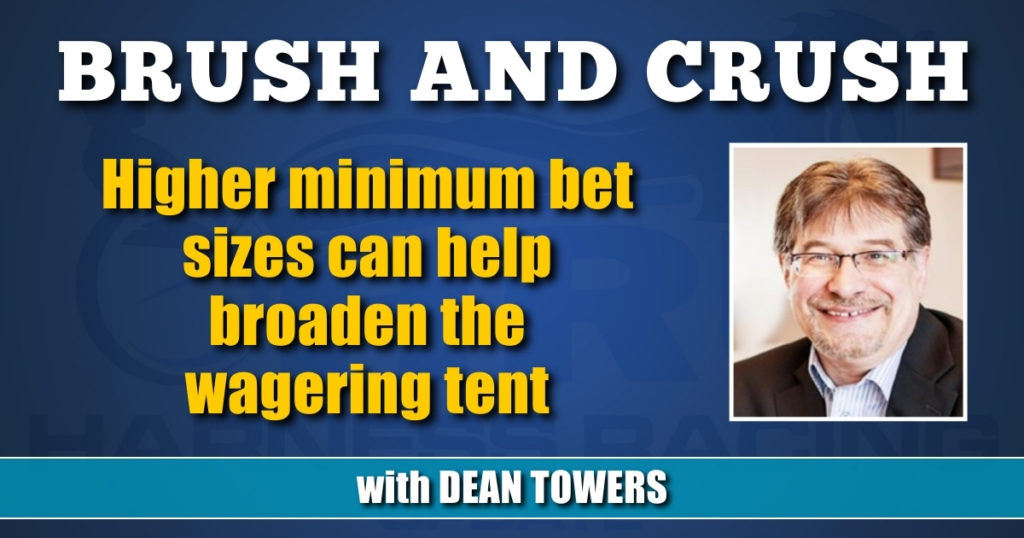 Two tracks – Mohawk and the Meadowlands – have wagers ripe for change.

Back in 2008, I was presenting on a racing panel and was joined by a chap from New Zealand. He talked about the benefits of their fractional wagering, where a customer wagers at whatever denomination they want; even a penny. Five or six years later a variant of this concept spread across North America and we can now bet at 10 or 20 cents as a matter of course.

I have little doubt that lower betting denominations have increased reach, as our New Zealand friend predicted, but has it been good for the player? With a qualifier (there’s nothing wrong with offering some lower minimum bets) I believe the answer to that is no.

Harness racing is a formful game, and bettors who sink hours into finding an opinion need a vessel to act on it. Lower minimums water down payoffs, making a lot of effort simply not worth it. In addition, these bets destroy most carryovers, which as we all know act as a benefit to players through reduced takeout.

One track that has interestingly resisted lower minimums has been Northfield Park, where multi-leg wagers are in $1 increments. So far, the results have been encouraging. They have almost weekly carryovers (there’s even been a Pick 3 carryover a time or two this meet), and these stoke large handles like the $150,000 Pick 5 pool we played into just this past Tuesday (Feb. 23).

But perhaps more importantly, the payoffs in multi’s have been worth getting your handicapping hands dirty for. A horse who would be covered with several 20 cent tickets at a Mohawk Park is sometimes not covered at all at Northfield. Just a few weeks ago, I was alive in a Pick 4 for a pool shot with a completely logical horse in the last leg. This happens almost nightly at the Cleveland oval.

There are currently two bets at two flagship tracks that I think can reap the rewards of higher minimums like Northfield’s customers have – Woodbine Entertainment’s Pick 4, and the Meadowlands’ Super High Five.

At Mohawk Park, the Pick 5 (at a low 20 cent minimum) has been wildly successful for the reasons relayed above – it’s a low takeout bet that’s tougher to hit with the added 5thleg, resulting in higher payouts. However, the much easier to hit 20 cent Pick 4 is faltering. This bet has higher than average takeout, and runs fairly formful each night, sometimes resulting in comically low 20 cent payouts. This is no secret to Woodbine – they don’t even guarantee their Pick 4 pool at $50,000 any longer.

I believe this wager needs a refresh: It should be offered at a $1 minimum, with a drop in takeout. This would attract the bettor who does the work and wants to cash on his or her opinion. It broadens a tent, and now that Woodbine Entertainment allows for carryover,
customers would likely get one from time to time, spurring monster pool size.

Over at the Meadowlands, they too have increased handle by making a tougher to hit bet easier with their 20 cent Pick 5. However, for one wager, they went the opposite direction. The last race Super High Five is 10 cents, not 20 cents. This makes a carryover a unicorn event (there was only one this meet), and the chance at a big score for being right is minimized. I suspect if they increased this minimum to 20 cents we’d see little change in short-term handle, and it would result in a better bet that will, over time, attract more dollars and interest from seasoned horseplayers.

In the business, bet size has been a hot topic with many for and against higher minimums. One thing I believe we all can agree on is that giving customers a choice is accretive. For the casual fans, offering a bet that allows them to spread is important as a marketing vehicle, but we can never forget the everyday horseplayer (or those who want to be one). Giving them a shot at making a score with higher bet size is vital to the health of the game.