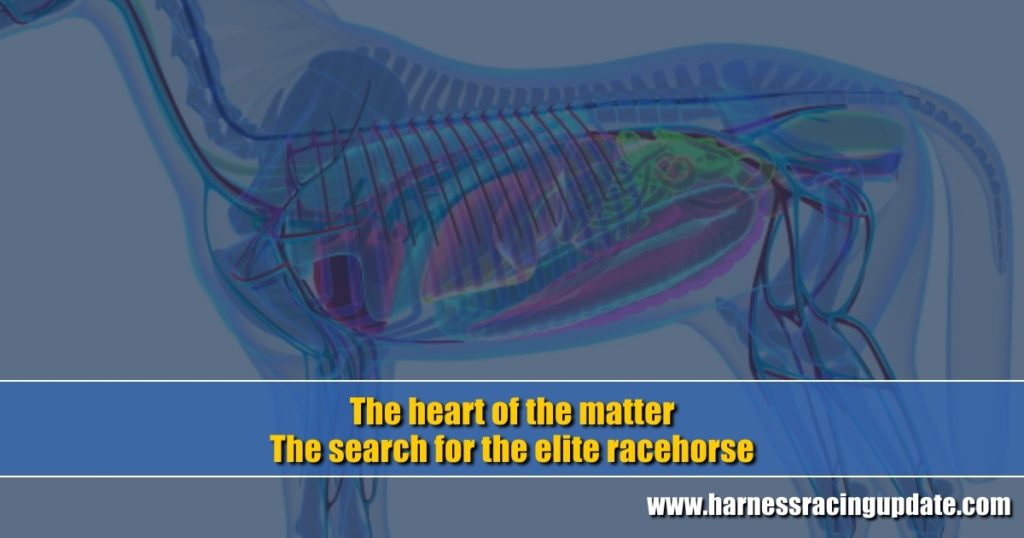 The heart of the matter

The long-held belief is there’s no way to measure the size of a horse’s heart, but EQB Inc. is trying to prove otherwise in the search for the elite racehorse.

Pedigree and conformation are the mainstays of yearling selection. But what if there was an edge, a data analytics perspective accessible to owners and trainers? While there’s no standardbred-specific supplier of such data, Equine Biomechanics & Exercise Physiology (EQB) Inc. has been offering it in the thoroughbred marketplace, starting out when “computers were so big that they filled up the room,” said EQB vice-president Patrice Miller. Founder Jeff Seder promotes the company as “USA’s leading talent scout buyer for young unraced thoroughbred racehorses, and we are often then used in their racing career management.”

Intangibles separate top athletes from average performers. Pedigree alone cannot distinguish between gifted and non-gifted full siblings. Quantifying and ranking the once-intangible is the specialization of EQB, which promotes its use of “big data analytics” and patented technology in the selection of young racehorses. Seder is the president and CEO of the company. Miller said they were both driven to gather the data that separates great from average horses, even though it meant an “insane” amount of work and investment.

“My business partner, he’s a brainy guy. He was top of his class, Harvard Law and Business school. He did an accelerated program while he qualified for the United States Olympic wrestling team,” she told HRU. “I rode races and claimed racehorses, and I knew the business very well. I rode steeplechase races, even. I had been on the front line of horse racing my whole life. […] So when I met Jeff, I didn’t know anything about what he was doing, and I just have to tell you, at that point we were both young and dumb. You don’t know how much you don’t know. By the time we found out, we were 10, 15 years into it.”

In a 2016 interview with the American Bar Association Journal, Seder explained his background: “I was looking for something to do with horse racing, but I had no money, no contacts. What I did have was training in statistics and management, and that led to a job doing biomechanics work with Olympic athletes. This was 1976, and the Soviet Union and the U.S. had always been competing. But then East Germany burst on the scene and won all these medals, and no one could figure out how they did it. So the U.S. Olympic Committee started a sports medicine committee with research and technical help at official training centers. For two years, I worked with the luge team, with figure skaters, track and field athletes and equestrians, until I decided to take what I’d learned and apply it to racehorses.”

He developed a small equine heart-rate monitor, and designed an ultrasonic bone scanner for racehorses. He compiled a database of his findings. “He knew DOS [an early, disk-based, computer operating system] and all these things,” explained Miller. “He had a textile company that did high-end upholstery, and it’s hard to weave that stuff, […] so he programmed all these looms so he could do this beautiful tapestry that was very high-end. He had a niche business, a brilliant business.” In 1999, Seder left Craftex Mills of Pennsylvania, a fully computer-integrated manufacturing business, to double down on developing EQB.

Weaving together points of equine data was the early challenge for the EQB start-up.

“Jeff thought about it, and he said, ‘Why don’t we put all these variables that we’re looking at in horses, everything from conformation to limb segments to ‘cardio’ [heart measurements], to this and that, and run it through [the computer] and see what happens?’ It was a pretty powerful tool. It is a pretty powerful tool,” recalled Miller. Artificial intelligence would become necessary and advantageous in sorting the fledgling company’s three decades-plus of archived thoroughbred data, ranking horses by where they fall within their age, sex, and level of training categories.

Elite Thoroughbred racehorses have bigger hearts than average, with bigger left ventricles, but not disproportionate to the size of other internal organs. Miller said EQB “compares apples to apples” by assessing young horses’ hearts using the same two-dimensional ultrasound echocardiography equipment and same technician, i.e. herself: “I’ve done a couple of hundred thousand of these cardio scans. I can be very fast and very accurate, and if I don’t see what I’m looking for, I just go on to the next horse.”

Prominent harness horse owners have consulted with EQB, although Miller noted that the company’s focus on thoroughbreds meant it was hard to evaluate findings: “We didn’t have the data from the standardbreds about how long the cardio [-vascular system] continued to develop.” EQB is also equipped to conduct video locomotion analysis of two-year-old thoroughbreds breezing under saddle; in terms of young standardbreds in training, “We’ve never done it,” she said. “I would think that if you studied it, because gait is very strongly related in thoroughbreds to the movement of air and blood, it would be the same in standardbreds, but you would have to figure out all that. The hard thing is, you have to do that down to 3/100ths of a second, to get your gap right,” when collecting data.

She was once asked to help evaluate the offspring of two well-known standardbred stallions who stood at New Jersey’s Walnridge Farm. “Way back, I did cardios on the Beach Towel horses. He was just starting at that point, and they wanted to see what kind of cardiac profile he was passing on. They had another good horse [Niatross] that was standing there. It was interesting to me because I got to do some really good horses that were by those sires.” EQB, which was founded the year Niatross was foaled (1977), was already specializing in data for the much-larger thoroughbred market. “I just didn’t have enough time” for more extensive assessment of harness horses, said a regretful Miller. “They were really good people too.”

More recently, another enterprising standardbred horseman reached out to EQB. “There was another guy, a really nice young guy [Frank Antonacci], who had a bunch of horses. Lindy Farms,” said Miller, acknowledging the family’s involvement in thoroughbred ownership as well. “I kind of wanted that to go, but at that time, we had a lot of business — we still do. I thought about that, [because] they obviously had really well-bred, really correct horses. You could tell they had thought about this a lot.”

The life-long horsewoman stressed that EQB isn’t doing the work of veterinarians, and she sometimes recommends that prospective buyers consult a vet. “We look at the heart a lot differently than a lot of veterinarians do,” said Miller. “We’re not looking for health issues. When we first started out, we were looking at older horses. We would go measure older horses at the racetrack, and they had good hearts. They might be a $5,000 claimer, but they had really good hearts. Well, the reason for that is somebody kept them around. The small-hearted horses eventually couldn’t race. They were someone’s pleasure horse, or doing something else that didn’t take a big heart. Then, to make sure the data was right, we had to find all these horses who had been retired due to lack of talent. We found them in riding schools; you don’t even want to know where we found them. Sure enough, some of them had injuries, but most of them did have inferior cardios.”

There is a secondary, psychological advantage when a horse has a big engine.

“The horses that can do a job tend to stay calmer,” observed the former jockey, comparing a gifted thoroughbred’s mindset to that of a professional human athlete at the top of their game. Lesser athletes, human or equine, can feel performance anxiety when they learn that they must face such formidable rivals.

Today, EQB will typically short-list five yearlings or 2-year-olds from those that a client likes in a given sale. “We found the best way to do it was to work as an agent,” Miller told HRU. “We don’t charge any more than the agents do; we just charge 5% commission, you know, like anybody else.”

“We line up horses that we think have excellent conformation, look the part, the vets do everything, and then the cardio [scan] comes in next to last, before the x-raying and all that, because unless they can breathe, unless they have athletic ability, it doesn’t really mean anything,” she explained. Her findings are later entered into EQB’s “Data Jockey” database, where each horse can be anonymously ranked by percentile within its age, sex, and training level categories.

“The analysis comes up two ways: One is a linear analysis, with an A or an A+ being great. We also do a bell curve analysis, that’s a [scale of] 1-5. There’s an average heart size, but we aren’t looking for average. We’re looking for elite, so that means you’re looking at the top of that bell curve. Most horses have perfectly adequate cardio to get along, but they won’t win Grade 1 races.”

Artificial intelligence finds where each colt or filly stands in relation to the criteria known to make a top racehorse. “It’s not a starting point, but I would say it’s a good ending point,” said Miller, adding that she doesn’t foresee AI replacing the intangible selection methods of skilled horsepeople. “No, I really don’t, and the way I know that is because I’ve dealt with a lot of really good trainers who go and look at horses. You present them with a short list. […] You know, they will pick out the one or two best, time after time, from those really good horses. So there’s something that they see: Maybe it’s the look in their eye; maybe it’s when they touch them, what they think. To me, it’s fascinating. Some people come by it naturally. I’m just glad I have a little edge on them.”

What about seeking a standardbred edge? Citing the many years that she and Seder have put into their work with thoroughbreds, plus their own advancing age and the comparatively-small North American harness horse market, Miller said it’s not an area EQB is exploring.

Intrigued by the seven-figure sales prices of two yearling trotting colts at the 2019 Lexington Selected Yearling Sale (Propulsion’s full brother Damien, $1 million; Greenshoe full brother Maverick, $1.1 million), she added that she can see the value of a breed-specific start-up that taps into the EQB methodology: “I can see it working in standardbreds, but it would have to be somebody willing to put a little time and money into it.”

Not to mention some of that essential ingredient found inside every great racehorse. Seder and Miller clearly put a lot of heart into EQB.

“We literally did!” she said, laughing, on her way to inspect more young thoroughbreds under the Florida sun.