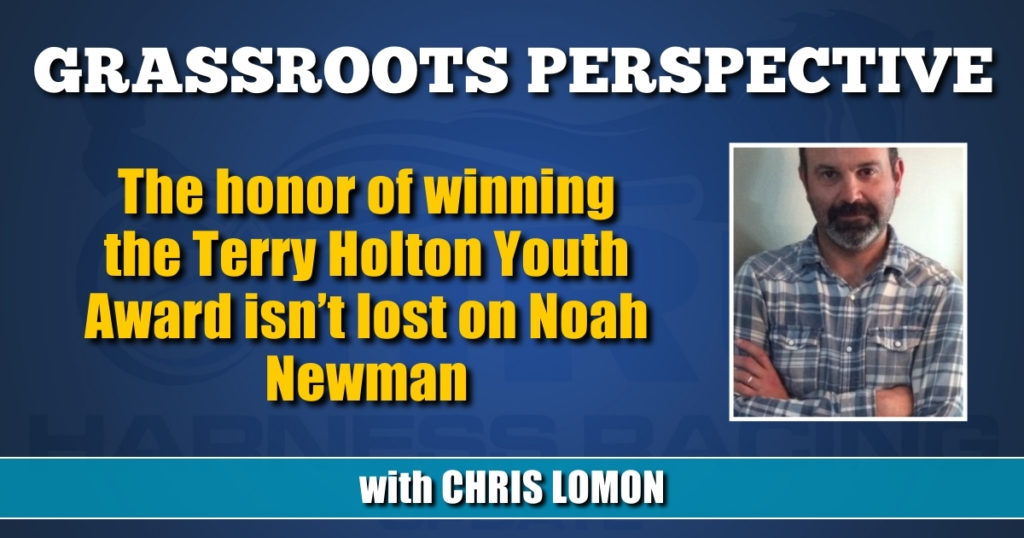 When it comes to winning awards, Noah Newman will tell you grandmother knows best.

“I didn’t even know I was nominated for it,” said the 16-year-old from Streetsboro, OH. “My grandma [Melinda Bailey], she nominated me. She didn’t think I would end up getting the award, but one day, she came up and showed me the email. I was like, ‘What’s this?’ And she told me about it. I thought it was pretty cool.”

The honor of being named the recipient of the 2020 Ohio Harness Horsemen’s Association Terry Holton Youth Award isn’t lost on Newman.

The award, in its 20th year, is named for Terry Holton, a 2005 inductee into the Ohio Harness Racing Hall of Fame. Holton of Newark, OH, was the winner of over 1,700 races in his career, and overcame several obstacles in his life, including his battle against pancreatic cancer.

It’s presented annually to a youth between the ages of 13 and 19 who has actively participated in harness racing during 2020 as a driver, trainer, groom, breeder, race office/publicity assistant, track maintenance crew or has provided outstanding service to harness racing.

The award means a great deal to Newman.

“It’s a really good feeling, actually. It feels so good to have something like this at my age.”

The sophomore at Streetsboro High School spent countless hours working with his family’s horses, specifically, the 17 standardbreds campaigned by his father Scott Cox, and the one his grandmother owns.

He took a shine to it immediately.

Early hours and late nights didn’t faze Newman, and it certainly didn’t diminish his enjoyment of being around the horses.

Having jogged horses since he was 10, finding the opportunity to learn more about the sport and the horses themselves further fueled Newman’s interest in all things standardbred.

The more that he learned, tough lessons and all, the more he began to appreciate the hard work that’s a hallmark of the industry.

“I’m training horses. I even trained down my grandma’s horse [Allegra]. Doing all of that – helping my dad, paddocking horses – it’s a really great honor to be able to do what I’m doing. I really got into it last year in the middle of the pandemic. It gave me a lot of time and experience to train down horses. It was a really great feeling to train down my grandma’s horse – I think that was the moment when it really hit me how much I love the sport. That’s what really kicked it off.”

While school comes first, immersing himself in the horse racing world continues to be an important part of Newman’s life outside of the classroom.

His big picture goal is to become a driver.

“That’s my big dream. Hopefully, this summer, I’ll be driving my grandma’s horse at the fairs. That’s the only horse she has right now.”

Bred by Andrew Kauffman of West Farmington, OH, the bay filly sold for $5,000 at the 2019 Buckeye Yearling Sale.

“She can be a pain sometimes. She gets that attitude of, ‘Oh, I don’t want to do this,’ but that’s uncommon in horses. But I would say she’s a lot easier than some of the horses my dad has. I had some horses that would pull your arms off and some that were nice. She’s right in the middle, which is what it’s like.”

Every time he leaves the barn, he heads home with something new learned.

“My dad taught me everything about equipment – putting it on, putting it on the right way, what it will do if you don’t put it on the right way – and that’s really opened my eyes. There’s a lot that goes into it. Some people think, ‘Oh, that’s cool, you get to go out and jog the horses.’ I talk about horses all day, but there’s more than just feeding them, taking care of them and getting them on the track. I like knowing that I can learn something new every day. And I do wake up happy every day.”

An accomplished athlete, Newman does see similarities between horse racing, his baseball life, and any of his other sporting endeavors.

One connection quickly comes to mind.

“Whatever it happens to be – horse racing or any sport – strength is something you to need to have. When you’re at bat, or running with the football, you have to have strength. The same thing goes with a horse that pulls. You need to have strength to handle the horse. The horses are strong, they’re athletic and they have speed, and that’s what any athlete hopes to have.”

When he’s not doing schoolwork, working with the horses or competing on the diamond or the gridiron, Newman has a part-time job at Big Dee’s Horse Tack & Vet Supplies, not far from his home.

It’s makes for a busy life, but not an unmanageable one.

“I play baseball for my school and my other team. I made varsity as a catcher last year as a freshman and I also play football. I work at Big Dee’s as well. I do like being around the horses, but schoolwork and school comes first.”

While becoming a full-time standardbred driver is the long-term goal, Newman also has his sights set on short-term objectives.

Not surprisingly, one of his main 2021 goals is to sit in the sulky.

“I don’t need to be driving regularly throughout the week, but if I can get the chance to drive a little bit that would be great. I’m still young and I’m still learning, but the big thing right now is school. But I’ll always have time for the horses. I get up before school and head to the barn. It’s something that really gets you going in the morning… it sets the table for the rest of the day.”

Newman sees it all – life inside and outside of horse racing – as the perfect balance.

As for the Terry Holton Youth Award, he remains grateful his grandmother made the decision to nominate him for it.

“It’s amazing feeling to win it. I’m very glad she did that for me.”