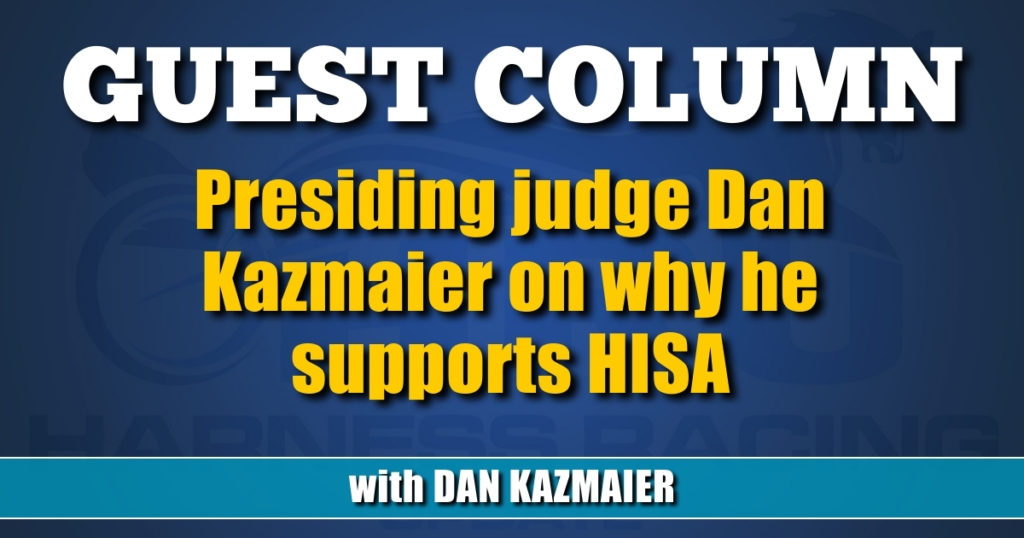 Presiding judge Dan Kazmaier on why he supports HISA

What follows is a statement that will be included in February’s Harness Racing Alumni’s newsletter written by Harrah’s Philadelphia presiding judge Dan Kazmaier. Dan attended the January hearing in support of the Horseracing Integrity Act (HISA) and after the hearing, he, along with another presiding judge (Art Gray), attended six Senate meetings in support of HISA. The statement was sent to HRU and others with Kazmaier’s permission.

Over the course of my career, I have attempted to stop drug use in horse racing by various means including fines and suspensions. These attempts have been opposed by overturning the suspension or lowering the length of the penalty by commissioners or through appeals by trainers. This has led to bending the rules or even continuous breaking of the rules by abusing the system currently in place.

When there is a trainer with four positives on four different horses with the same drug within a five-month period, the opposing trainers, owners, betting public, and the image of horse racing as a whole becomes tarnished through this fraudulent activity and needs to stop.

It is imperative to implement strict rules in order to hold those accountable for breaching such laws by expelling them and continuing the legacy of true sportsmanship in horse racing.

A trainer/driver recently made a statement (full statement here) that since 29 FBI indictments, he has had better success at Yonkers. He feels that the “drug” trainers being shut down has made racing more competitive. This is something we should all be striving for in our sport.

Pennsylvania has the second most dates for harness and thoroughbred races in the country, contributing billions of dollars to the economy and providing for numerous families’ livelihood. We need to make horse racing safe and drug-free. And those who do not care about the safety and health of the horses must be dealt with accordingly.

As a racing community, we must stand together and stop this abuse to the horses and to the sport. This is why I support HR 1754. The status quo has not been working.

Since it has been written into law we must act now to make sure standardbreds are included. In addition our industry is different from thoroughbreds, and because of this, we require different rules. The new committee must be made aware of these differences and enact regulations that will help revive our sport and create a level-playing field for all.