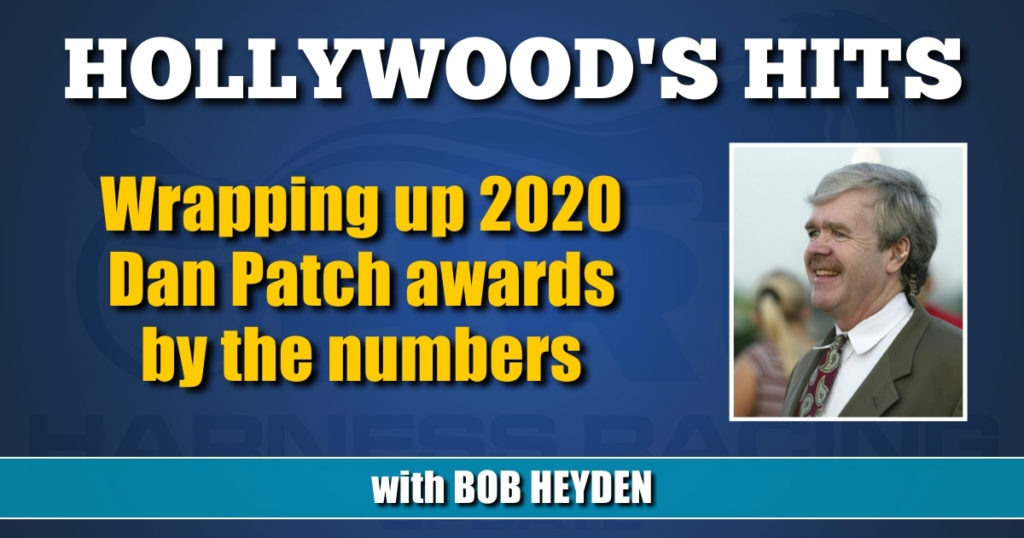 Wrapping up 2020 Dan Patch awards by the numbers

Interesting notes and numbers from the 2020 Dan Patch winners:

1. Dan Patch-winning brothers! Nice job by Andrew McCarthy with Ramona Hill and Todd McCarthy with Anoka Hanover. Each driving brother won a division title with a trotting filly. Females were also in the spotlight in 2014 when Trace Tetrick won the 3YOFP division with Colors A Virgin over Sayitallbb 106-40. Tim Tetrick drove the Horse of the Year J K She’salady her final two starts to wrap up the title, and also was the regular driver behind Androvette who tied with Rocklamation for the Older Pacing Mare title. Tim also drove the Trotting Mare Of The Year Classic Martine.

3. Prior to 1978, there was only one award per age and gait, with males and females combined as in a Two-Year-Old Pacer of the Year. Since ’78, each division has honored both a male and female horse.

4. Gimpanzee as Trotter Of The Year follows Greenshoe in 2019, both for trainer Marcus Melander. This year, three different sets of stablemates won year-end awards:

5. Thirty years elapsed from a trotter winning the Breeders Crown/division title at 2-3-4. It happened with Peace Corps then and with Mack Lobell in 1986-1987-1988. Gimpanzee now joins that elite company.

7. Six of the 12 Breeders Crown winners also won their divisions. Oddly, not Tall Dark Stranger (second) or Party Girl Hill (third) the top two in the Horse of the Year tally.

9. Tall Dark Stranger is the 19th winner from the male sophomore pacing division (26 per cent) in the 74 years of balloting to be named Horse of the Year.

10. Worldwide awards? For sure. Drivers who won awards in 2020 with the horses they drove:

Trainers who won awards in 2020 with horses they trained:

Finally, my Morning Line for the 2021 Horse of the Year: