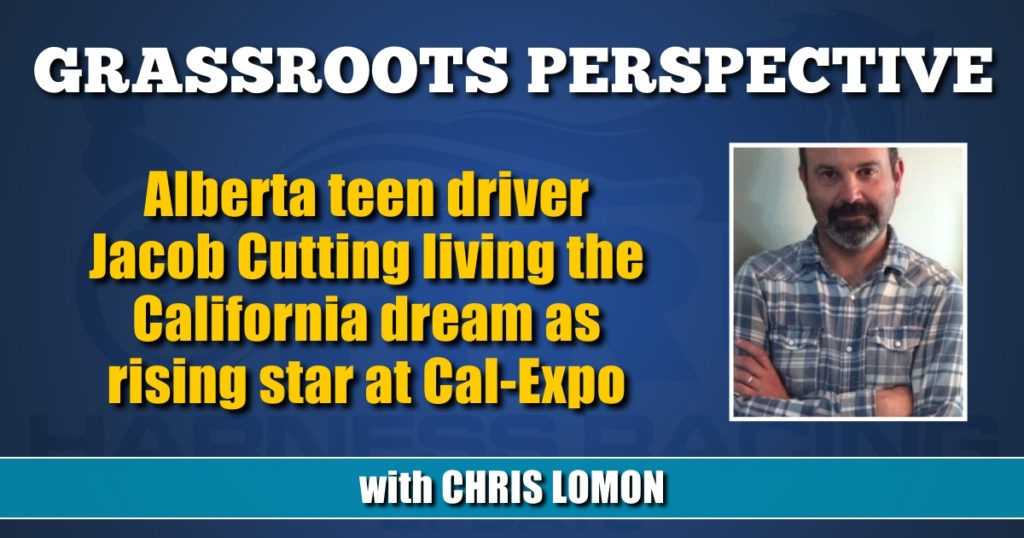 Every time his wheels touch the racetrack in the California capital, the Canadian teenager takes brief pause to look into the Sacramento sky and the towering lights that shine across the one-mile oval.

It’s not something that would be easily noticed, the handful of seconds Jacob Cutting allows himself every live race night to soak up the surroundings at Cal Expo Racetrack.

For the 19-year-old driver/trainer, it’s a welcome reminder that he is everywhere he wants to be.

“It really does make you feel like you’re stepping into the spotlight,” said Cutting. “Racing at night, it almost makes it feel as though it’s more official, so to speak. It feels like you’re on stage when you race at night.”

The native of Calgary, AB came to the Golden State in late 2019, bringing seven horses with him, and the hope of attracting interest from local trainers.

Although it took some time to build trust and momentum, the wins and demand to have him sit in the sulky of more horses would eventually come.

Cutting kicked off his driving career in 2019, winning six races in 123 starts.His first two Cal Expo wins came with his pacing mare Paloma Ruiz. The daughter of Trust The Artist was 50-1 when she dead-heated for the victory on Dec. 6, 2019, and doubled up at 5-2 next time out.

“The reason why I came from Alberta to California at the start of 2020 was for some opportunities. There isn’t that much opportunity in Alberta catch-driving wise, so I came here to see how things might go. It started out slowly, but it’s really picked up. I also went to Running Aces [Minnesota] this year and came back to Cal Expo, and started getting some driving doubles and triples.”

He kicked off 2021 in style, winning six races on the Jan. 3 card, including River Lassena in Race 7 and one dash later withAllmyx’sliventexas.

The second-generation horseman (his father Darryl won nearly 300 races as a driver/trainer) took his half-dozen bonanza in stride.

“I tried not to think about what was going on that night. It did hit me at the end of the card and I thought, ‘Wow! Did I really just win six races?’ When I’m driving, it doesn’t matter if I hadn’t won a race or if I had won three straight, I just try and keep a level head. I focus on the horse that I’m driving.”

He hasn’t slowed down a fraction since then.

This year, he’s well on pace on to set a slew of personal-best marks for driving and training.

The move south of the Canadian border has paid off in more ways than just the numbers in the win column.

For Cutting, the opportunity to improve his driving skills and get more quality drives has been a huge boost to his profile.

“Whether you’re driving favorites or longshots, the more chances you get to drive, the more things you learn. Every time you line up behind the gate, you know you’re going to learn something new. As a young driver, that’s so important. I’ve definitely gained more confidence driving at Cal Expo and Running Aces. When I first came here, I would tend to second-guess things, when to move horses – that kind of thing. Now that I’m winning more races and getting more experience, I’m putting horses in better spots. It’s a good feeling to have that confidence and I’m grateful for the chances I’m getting.”

He’s also thankful for the support back home.

Daily texts from family and friends are the norm.

When the Cal Expo meet comes to a close, Cutting will head northeast to compete at Running Aces, where he’ll race during the summer.

Beyond that, there’s no game plan, at least for the time being.

He’s eager to see what lies ahead in Minnesota.

“I don’t have anything drawn out on paper. We’re just going to go with the flow and see how things go.”

Until then, Cutting, who is currently racing nine of his own horses, will continue to do some California dreaming.
Don’t expect him to be soaking up the sun, sand and surf over his time at Cal Expo.

“No, not really,” said Cutting with a laugh, when asked if he’s taken advantage of the warm weather. “Racing and taking care of the horses, it never stops. But that’s fine with me. When I first came here from Canada, it seemed like every day was summer. Now that I’ve become more acclimatized, the so-called ‘cold days,’ they seem really cold, but they’re not when I check what the weather is like in Alberta. I grew up in Alberta, and it gets really cold there at certain times of the year.”

As long as things keep heating up, Cutting won’t have a single complaint.

“I’ve really enjoyed everything about being here in California.I’m just really enjoying all of it. The people and the guys I drive with have been very good to me.I came to the U.S. hoping that I would be able to work towards getting more opportunities. I knew that wouldn’t be a given, but I’ve been very fortunate that things have gone so well.”

Cutting won’t be resting on his laurels.

“When you do well, it only makes you work harder. You don’t ever take anything for granted in this sport. You just go out there every night and give your best effort.”

It’s what one of standardbred racing’s rising stars reminds himself of every time he steps into the Cal Expo spotlight.