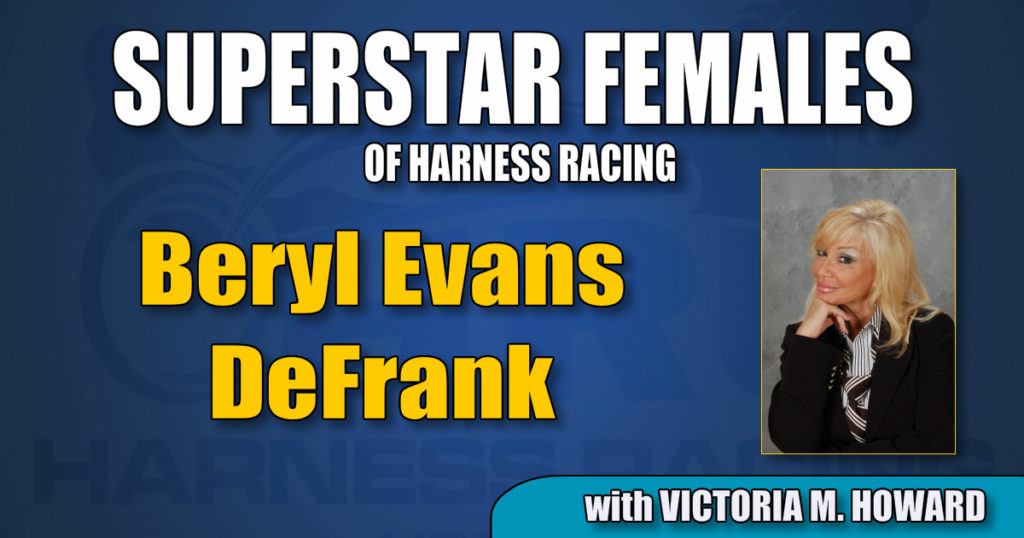 Editor’s note: On Dec. 12, harness racing lost one of its most influential men in the sport when Joe DeFrank died. This column about his wife, Beryl, was written in advance of Joe’s death and was intended to be published on Dec. 28. In tribute to the family and Joe’s memory, we have decided to publish it early. Joe’s funeral is scheduled for this Saturday (Dec. 19) in Saratoga Springs, NY.)

When I contacted Beryl about writing her story she said, “I’m flattered, but I don’t consider myself a superstar.”

I disagree for Beryl and her husband Joe De Frank are one of harness racing’s influential couples who have done so much for harness racing by dedicating their lives promoting and enhancing our sport.

Beryl Evans came from a country where many acclaimed people hailed from — such as The Beatles, Princess Diana, William Shakespeare and Queen Elizabeth and Victoria.

“I was born in a town called Dagenham in England. Most people living there were from London and other bombed out cities across Britain,” Beryl said.

“I say ‘bombed out’ because the influx was during and after WWII. The major employer in our town was Fords of Dagenham which employed many people, including my father.”

Making a career in harness racing was the furthest thing from young Beryl’s mind for she and her family never heard of the sport or experienced it.

“I’m sure harness racing was probably contested at country fair grounds and farms, but we never saw it.

“We did watch thoroughbred racing, such as The Grand National and such. Granddad would always have a daily flutter on the horses and there was a man who lived on granddad’s street known as a bookie’s runner who would take the bets from people and deliver them to the local bookies. Although this was illegal, nobody seemed to mind.”

After leaving England, Beryl moved to Canada. It wasn’t long until she would not only observe harness racing, but would become actively involved and remained so for many, many years.

“In 1973, I was introduced to harness racing at Windsor Raceway. I got a job as a secretary working for William Rowe, who was the president of the track. The Rowe family had been involved in harness racing for years.

“There were a lot of great people who worked at Windsor, including a man named Joe DeFrank who was the director of racing. Our paths barely crossed, for he worked the front side and I worked the backside. But when they finally did — well, the rest is history, as they say,” she said, laughing.

Joe De Frank was a well-respected man known for bringing many future superstar drivers and trainers to the Meadowlands with him when he located there.

“We both loved Windsor Raceway and my husband began scouting for horses and horsemen —recognizing the superb talent in many, such as Ray and Larry Remmen, and Greg Wright.

“I worked in the race office and wore various caps. I ordered supplies for the paddock and did the usual routine office jobs, but my main job was taking care of the stake races. I also dealt with the governing bodies, booked flights and hotels, and designed the horse coolers and loved to watch the horses coming up to the front paddock wearing them.

“In those days we were not computerized. It was old school and everything was done by hand and calculator until we finally had some software installed, which helped a lot.

“My favorite races were our biggest races and early closers like The Meadowlands Pace, The Woodrow Wilson and The Sweetheart Pace, etc. The purses were huge at that time.

I helped Joe with the Statue of Liberty Trot and really loved doing it.”

Beryl was one of the lucky ones who was at the Meadowlands when harness racing was at its best.

“I was around when the greatest drivers and horses were on the track. Yes, I had my favorites with the oldest and the newest, but some of my favorite drivers never even made a serious stake race. If I met a driver and liked him, I became his biggest fan and would cheer my head off for him. And I am not being diplomatic with that statement, for it’s just the way it is.

“But of course I was fortunate in that I watched the ‘cream of the crop’’; each driver having their own style of racing. It was an incredible experience.

“Now when it comes to my favorite horse, that’s more difficult for there were so many. There was Rambling Willie — the great campaigner /aka ‘the horse that God loved!’ And of course, Mack Lobell, Niatross, and Ghengis Khan; but I loved all the horses that created interest and the ‘wow’ factor.

“I’ve had many great times and thrills in the sport, but my greatest high was when my husband was inducted into Harness Racing Hall of Fame. The memory still makes me smile.”

The De Franks retired in 2001 about the time harness racing started to decline.

“And off–track betting was just the beginning, for casinos began popping up everywhere and tracks needed a part of the action to stay afloat. Advertising was drastically cut and many other factors added to the decline. But I’ll say it again — who wants to go to a half-empty racetrack when you have a packed OTB parlor?

“In the first Camelot years of the great Meadowlands, my husband Joe would say, ‘Even Mickey Mouse could do this job,’” she said, laughing.

“What he meant of course was when everything was right, the track was golden.”

Although the DeFranks have never owned horses, they were and always will be a significant and influential part of racing, especially at the Meadowlands.

Luckily for the sport, the DeFrank name continues as Joe’s son, Doug was a valued assistant in the race office for many years and is still actively involved.

“Doug was in his 20s when he started working there and he’s never looked back. He is still working in the race office at the Meadowlands today, and we are so proud of him.”

What does Beryl think the future is for harness racing?

“The horse sales have soared the past few years and people are paying huge amounts. I am a little confused for with all the track closures, perhaps all that will be left are stake races with minimal overnights.

“I know everyone is still praying for casino money, but it won’t bring back our attendance at the track and attendance is the only thing that can keep us alive. Casino money will definitely help the horsemen with increases in purse money, but I see all of this as a band aid, for it will not fix the public’s lack of interest in our sport.”