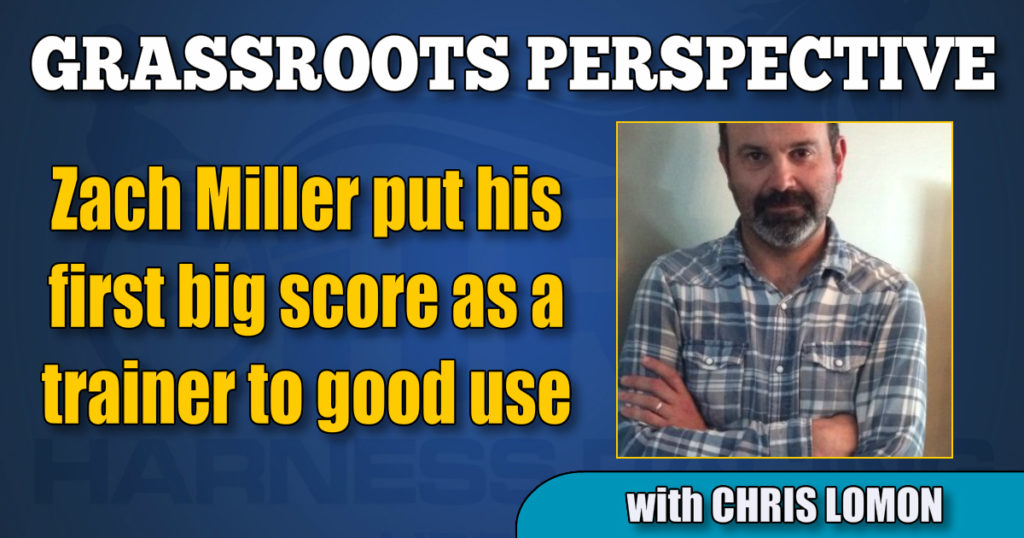 All it takes is an educated guess as to what industry helped Zach Miller pay off his four-year education at Purdue University.

On the night of Sept. 10, 2011 at Indiana Downs, the 21-year-old from Amboy, IN was hoping Pacific Sun Rae, a pacing daughter of Panspacificflight (IN), would have the race of her life.

Sent on her way at 5-2 in the $200,000 Indiana Sires Stakes 3-year-old Fillies Final, the sophomore bay, with Trace Tetrick at the controls, converted a head advantage at the stretch call into a 1 ¼-length win in a time of 1:53.3.

“I was still in school at that point,” said Miller, who co-owned Pacific Sun Rae with his father, longtime Indiana horseman Alvin Miller, and Ted Comerford. “She was a nice mare, a horse we bought for $6,500. We knew she had a good shot, but there was a really good horse that year, Radar Contact, that we beat in the leg before the final. It was the first time she had lost in 2011. So, we figured if we could work out a trip, we might have a shot.”

Although the trip didn’t quite work as expected, the end result was all that mattered to the connections of Pacific Sun Rae.

“The only thing that threw us for a loop was that our mare was a closer,” said Miller. “She always came from off the pace. Trace, who always did a great job with her, would have her rolling late and she’d come home like a freight train. In the final, she was first-up and going after Radar Contact. I thought, ‘Oh, Dear Lord.’ But, she was good that night. She drove on by and got the win.”

It didn’t take long for the younger Miller to figure out what he was going to do with his share of the $100,000 payday courtesy of the horse that he keep on as a broodmare.

First on the list: seeing a zero beside his student loan amount. Second: a sweet ride.

“That was a good year and a great result. I wanted to make sure I paid off my school, and I wanted to get myself a truck. So I did both.”

Smart decisions, on and off the racetrack, are nothing new to Miller.

When he joined the standardbred ranks as an 18-year-old, he made an immediate impact, winning his first official drive at the Converse Fairgrounds, in Converse, IN.

“I think I jogged my first horse before I was in Kindergarten,” Miller said with a laugh. “I’m not sure if I was destined to be in racing, or if I was just born into it. But I wanted to make sure I completed my education before making any big career decisions.”

After earning his diploma, Miller had two jobs, one outside of the harness world, and the other as an assistant trainer to his father.

He knew, early on, it had to be one or the other when it came to his career.

“When I got out of college, I was doing this and I had another job. I did that for two-and-a-half, almost three years. You just can’t do that. I didn’t have enough time for both. I realized that you can’t do either job right if you’re splitting time between them both. So, I decided what I really wanted was to have my own stable.

“I drove a little bit (he has 64 career driving triumphs), but I decided to leave that to the professionals and focus on training. And now, I’m exactly where I want to be. I never wanted to have a 50-horse stable. That turns into an assembly line.”

Over the years, there have been other memorable stars Miller has campaigned. That group includes pacer Mojoto Hanover (“the first nice horse I trained”), Fun Time, a pacing son of Full of Fun (IN) he trained and owned, and Winning Is Sweet, a pacing son of Dontgetinmyway (IN).

Miller trained and co-owned Winning Is Sweet with his father and Comeford.

Miller, who has 11 horses in his stable (10 of which he owns a part of), still helps his father with his operation.

He also works side-by-side with his wife, Dessa.

The couple has had success with Skyway Brittney, a 2-year-old daughter of Rockin Image (IN), they own. They paid $6,000 for the bay pacer, bred by Lyle Slabach, at the 2019 Hoosier Yearling Sales.

Although she’s winless in 10 starts, Skyway Brittney recently finished third in her Indiana Sires Stakes event, bringing in $30,000 for the Millers.

“Dessa’s a very hard worker and does a fantastic job. I absolutely could not do it without her. She does all the barn work, takes care of the horses, makes sure their legs are good, and everything runs smoothly.”

Miller, now 30, is hoping to find another Pacific Sun Rae to add to his barn.

And if he were to land that horse and win another six-figure stakes race, he already has a pretty good idea of where most of that money would go.

“Dessa and I have been looking for a nicer house, so that’s probably where the money would go next time around. We had a pretty good this year and we got to buy some nice babies at the sale. Hopefully, there could be another special one in that group for us.”