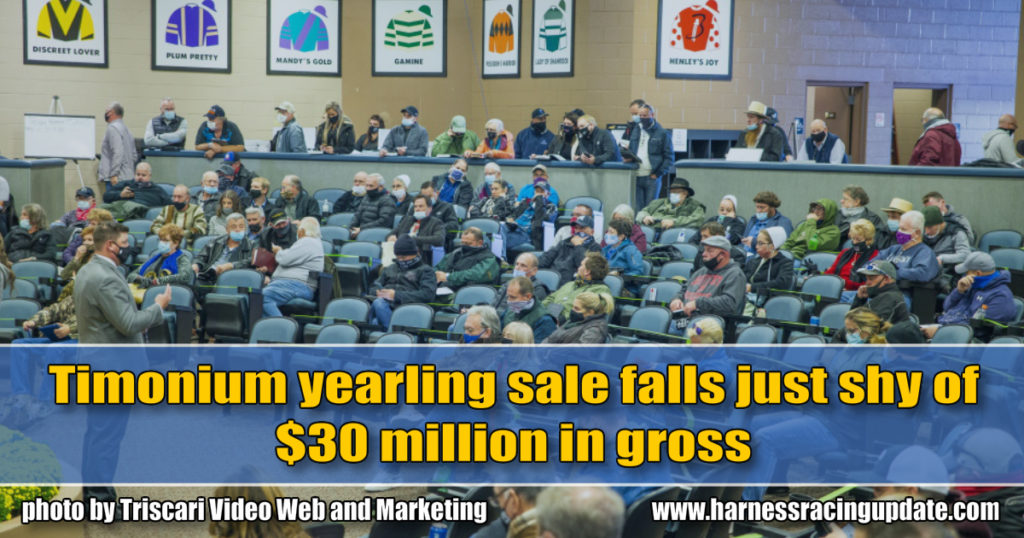 Fewer horses, new location and COVID-19 challenges that placed particular impediments on foreign buyers contributed to the lowest gross in at least 20 years.

The Standardbred Horse Sales Company’s (SHSC) three-day, pandemic-era yearling sale concluded Thursday (Nov. 5) down 22 per cent in average and it failed to hit $30 million in gross sales for the first time in at least 20 years.

“Given the fact we sold 60 fewer horses than last year and lost 30 to Lexington — and that a number of those horses were very high-end sellers for them — I think when you take all of that into consideration, given the number of horses we had to sell, I think we reasonably kept pace with (Lexington) and the industry in general. I think the high end was really strong. On the first day, I thought the middle market would remain stronger than it was, but as time went on it became clear that the middle market ended up being somewhat soft,” said sale president and CEO Pete Spears.

For comparison purposes, this year’s Lexington sale was down 16.5 per cent in average, but produced the second highest gross in its history with a total of $41,552,000 for 816 yearlings sold. Lexington averaged $50,922.

For all sales, the COVID-19 pandemic has created major challenges in commerce. Spears said border closures and travel restrictions had a strong impact on SHSC’s Canadian and European buyers.

“I think the number of people able to participate in the sale was compromised considerably because of COVID-19,” Spears said. “I sent probably at least 100 letters of introduction for buyers to bring and present to immigration and customs, detailing about how important their participation was to our sale and to the U.S. economy. I provided economic data and yet, with that, there were large numbers of Canadian buyers that were turned back at the border. It was my understanding that the ones that were turned back came by car. Those who attempted to come to Timonium by plane were uniformly successful in being admitted to the U.S. So, I thought that was very interesting.

“Even without a deep analysis of the buyers, I think it was very clear that European participation was down a lot. A long-time Finnish friend and client wanted to come in the worst way and I wrote him a special letter to U.S. immigration and he was turned down. He requested that I go through a separate appeals process. I wrote a second letter with even more details and that was declined. Finally, he even tried to show up at the airport, just to see whether he could talk to customs officials directly and maybe convince them to let him fly here and he was still turned away.”

Though SHSC did take online bids — and that proved to be successful — Spears said foreign buyers were impeded by not being able to inspect horses themselves.

“You have to have boots on the ground to inspect the animals. The kind of Europeans that want to participate at these big sales are people who want to buy high-end horses and I don’t think we’ve reached a point yet where people want to pay very big money for horses they haven’t examined themselves. I have seen very few European representatives here that could perform that task for people,” Spears said. “Certainly, I would’ve been very happy to refer European clients to friendly U.S. agents who could’ve looked at horses for them, but you and I both know that everybody has his own traditional pathway of doing things and, when that pathway is not available, people don’t always feel comfortable adapting when you’re talking about this amount of money.”

All that said, Spears had high praise for his staff and the greater standardbred industry that jumped in to help when a large tent collapsed Monday during high winds (full story here)

“The two things I would like to say is that I’m really proud of my operations team, who were challenged to the maximum this year, especially with the weather, the terrible winds, the failure of the tent, the new surroundings. I think they did a wonderful job,” Spears said. “As I said in a little speech at the beginning of the sale, I’m especially grateful to the people who dropped whatever they were doing to come and help and rescue the horses and rescue trapped people when we had the tent failure. I just can’t be grateful enough for their participation and selflessness.

“We’re just proud that we were able to meet our commitment to our consignors by holding a live sale. It wasn’t easy to find an alternative venue and we had to work really hard to find one. Once we found one, we had to work extremely hard to set it up and make it workable for us… as I say, I’m very proud of my team and very grateful that we could come through for our consignors when they needed it most.”