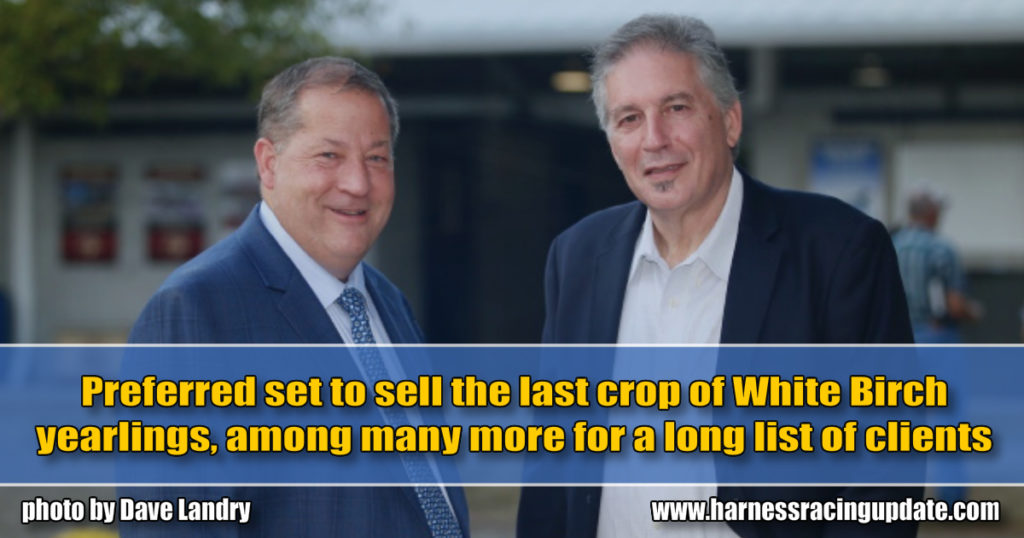 Preferred set to sell the last crop of White Birch yearlings, among many more for a long list of clients

Reid and his late partner Geoff Stein have sold horses for the Parisi family that ran White Birch Farm for nearly three decades.

“It’s a relationship that we’re very proud of, both from a longevity point of view… obviously going back to Joe Parisi and then his son, Michael,” Reid said. “Pound-for-pound the number of champions that White Birch produced was an amazing feat. It makes you proud to be able to represent a farm like that.”

With Joe, Michael and long-time farm manager Steve Williams now all dead, the decision was made to sell the equine holdings.

“Obviously, you wish they could stay around forever, but it’s just the course of nature that things change and we’ll move forward. We’re just thankful for the opportunity to represent them for 25-30 years,” Reid said.

“White Birch has some nice Captaintreacherous fillies to offer. They also have the half-brother to Donna Soprano [Hip 54, No More Trix],” Reid said.

As for the rest of his consignment — which includes a number of smaller, high-quality breeders like White Birch — Reid said it was a very typical selection of Preferred horses.

“We have something for everyone,” Reid said. “We represent a lot of different breeders, big and small.

“We have trotting colts by Muscle Hill and Cantab. Trotting fillies we have Chapter Seven and some nice first-crop sires. We have a good variety of regional sires and Grand Circuit sires.

“On the pacing side, it’s the same way. We have some nice Captains, first crop of Huntsville, a really nice Downbytheseaside… We’re excited to offer the group this week.

Reid said he doesn’t believe selling in Timonium for the first time will have a major impact on the bottom line.

“People find the good horses. It’s just a matter of what the depth of the market is going to be and until we get through the week it’s kind of an unknown,” he said. “The facility is fine. From a buyer’s perspective, it just takes a little bit of adjustment to any new situation, but I would say that they are handling it relatively well. I think everything is going as well as it can under the circumstances… It’s hard for me to get a gauge because it’s all new here. 2020 has been a something that changes on a weekly basis, if not a daily basis, so Harrisburg has been in everyone’s groove for a long time and if you take somebody out of their element it’s always challenging. We’re going to have some challenges here this week, but we’re going to manage the best we can and get it behind us.

“Am I as confident going into this year as in years past? I would probably say ‘no’. That being said, I do have faith in the marketplace and I think people will plan accordingly and, at the end of the week, I hope it’s a good week for all of us.”