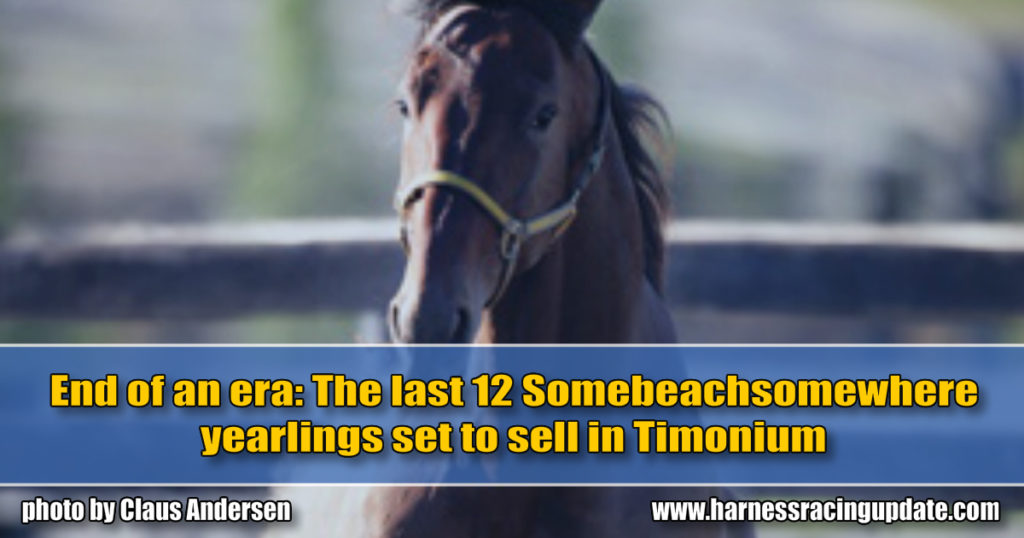 End of an era: The last 12 Somebeachsomewhere yearlings set to sell in Timonium

Dr. Bridgette Jablonsky didn’t think she would be emotional selling the very last crop of yearlings from the late, great stallion Somebeachsomewhere, but now that the week is here she said she is somewhat melancholy.

Jablonsky, the executive vice-president and syndicate manager at Hanover Shoe Farms that stood Somebeachsomewhere for his entire stud career, believes The Beach is one of the greatest pacing stallion of all time.

“People that want to buy a Somebeachsomewhere yearling, this is the last chance. I can promise people, there’s not going to be any tricks up our sleeve. This is it. In the northern hemisphere, you can only breed mares (with frozen semen) the year (the stallion) dies, so these are the last 12.

Jablonsky was quick to rebuke critics that have said such things as, “‘I wouldn’t have bred these 12 mares to Somebeachsomewhere.’ What people don’t realize is that he died in January and the mares were booked already. We didn’t know we had these straws – we didn’t think we had straws and I got an email out of the blue from our company that freezes the semen that said, ‘Did you know we have these straws?’”

Jablonsky said the star of Somebeachsomewhere’s last crop at Hanover is Hip #101 Frozen Hanover, a full-brother to Filibuster Hanover.

“I would say there are four outstanding ones. The full brother to Filibuster is outstanding,” Jablonsky said.

“Hip 48 is named William Hanover and he’s the first foal out of a sister to J K Willpower. He’s a big, strong colt and (Somebeachsomewhere’s trainer and part-owner) Brent MacGrath assured me that he acts just like Beach did as a young horse.

Apart from being an outstanding horse, Somebeachsomewhere was also a personal favorite of Jablonsky’s.

Jablonsky said she expects to be emotional when the last Somebeachsomewhere (Hip #427 Lido Hanover) goes through the ring late on Wednesday (Nov. 4).

“He’s a little on the small side, so he’s not going to be selling for what those other four sell for, but I think it’s emotional. I’m glad that we have quite a few Beach mares at home. (His son) Captaintreacherous has done a tremendous job trying to fill his spot and it’s really nice to have Captain. Captain you can tell is Beach’s son, but he’s got a lot of Artsplace in him with his demeanor and his looks.

“It’s really nice to have Papi (Rob Hanover joining the Hanover stallion ranks), because Papi, to me, is Beach through and through. He looks like him and he’s a wonderful, wonderful horse to be around. It’s nice to have the two of them now. Actually, three because Stay Hungry is a Beach, too. We have three sons, so things could be worse for us. We could’ve lost him and not had 15 or 16 mares by him and three stallions, but we do have them.”