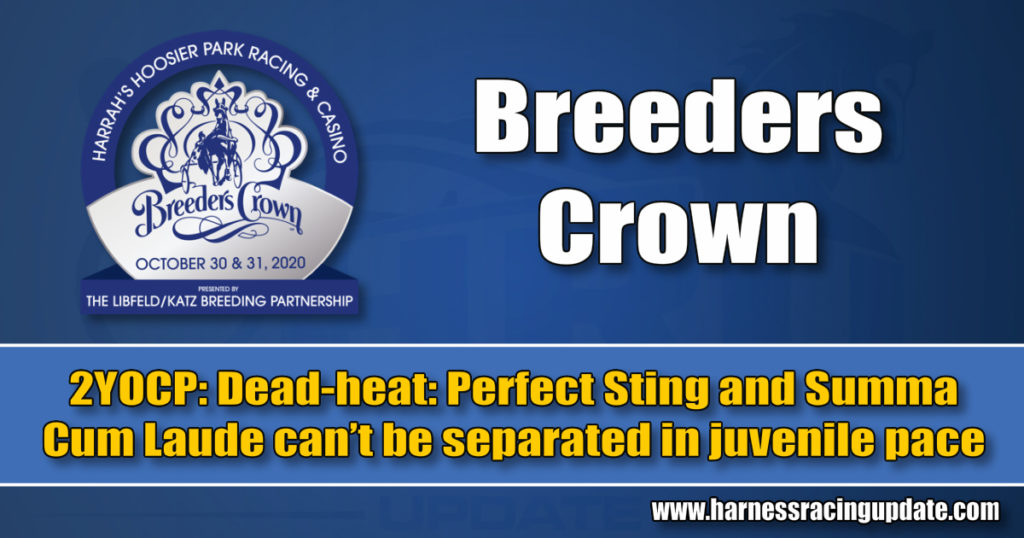 The Breeders Crown final brought the unstoppable force that is Perfect Sting to meet the immovable object in the shape of the Ron Burke-trained Southwind Gendry on a clear and chilly evening.

Neither pacer had lost a race in the last two months but something had to give on this night as the two phenoms squared off for the first time with year-end honors hanging in the balance.

Although eight other colts lined up to solve the intriguing paradox, only the 1-2 Perfect Sting and 2-1 Southwind Gendry were less than double digits on the tote board with the remainder of the field seemingly resigned to roles as extras in a showcase of two protagonists, who had dominated their division throughout the season.

Southwind Gendry, also by Always B Miki, brought a record of nine wins from 11 starts to the Breeders Crown final, including the Pennsylvania Sire Stakes championship as well as divisions of the Bluegrass and International Stallion Stakes.

The stage was set for a heavyweight fight of epic proportions with Southwind Gendry, from post 3 in rein to Yannick Gingras, commanding the early lead through a quick quarter in :25.3 as Perfect Sting, from post 2 for David Miller, made sure his rival earned the point.

Miller and Perfect Sting pulled the pocket down the backstretch to take control through a half-mile in :54.1 and led the field into the turn with Abuckabett Hanover looming large.

Holloway, who had to share the spoils on this night, regardless declared his horse a champion following the race.

“It means a lot. I had the mother, the father. We talked the talk early and said he was going to be the best and he backed it up. He raced really huge tonight,” said Holloway, who also conditioned three-time Breeders Crown-winner and two-time Pacer of the Year Jenna’s Beach Boy. “Early on I said (Perfect Sting) could be the best one I’ve ever had, and I think he’s proven it. None of my others ever went undefeated at 2.”

“Well, his dad and Wiggle It Jiggleit, they used to go at it like that all the time. Neither one of us, Yannick or me, wanted to give our horses any breathers,” said Miller. “I kind of figured it was going to be a battle, but (Perfect Sting) held strong. He battled a long ways and he held on. He showed his guts there.”

“Right at the wire I looked over and saw him,” said Miller. “I was still kind of judging Gendry and I looked over at the last second and saw Brian right there and it looked like he had momentum.”

“Getting away fourth, I didn’t take the worst spot,” said Sears. “Yannick was pushing the pace a little bit going to the half and I thought the way this horse could follow along pretty good, I sat in fourth and figured I could shake loose. I was following the right horses and it worked out.

“I was just counting them as I was going by. I knew I was closing in. The stretch is really long here, so I thought I was never quite out of it until it’s over.”

For Burke, it was a tale of two stretch drives with Southwind Gendry perfectly placed to go by if good enough, only for the longer-priced stablemate to provide late drama.

“The other horse got stung 25-and-a-piece, so I’m not embarrassed at all by him and then this colt, like, it was great. He angled him out late and was airborne,” said Burke. “F – – – ing Perfect Sting is hard to get around! You just can’t get around him. I thought we had him with the other colt and this colt, I don’t know, to be honest, to be fair to Perfect Sting, if he ever saw us coming.”

“He’s a young horse and he’s getting better and better,” said Burke. “He’s going to be a good colt next year. He’s a good colt now, but the big track has helped him a lot. He just had to get off those small tracks.”