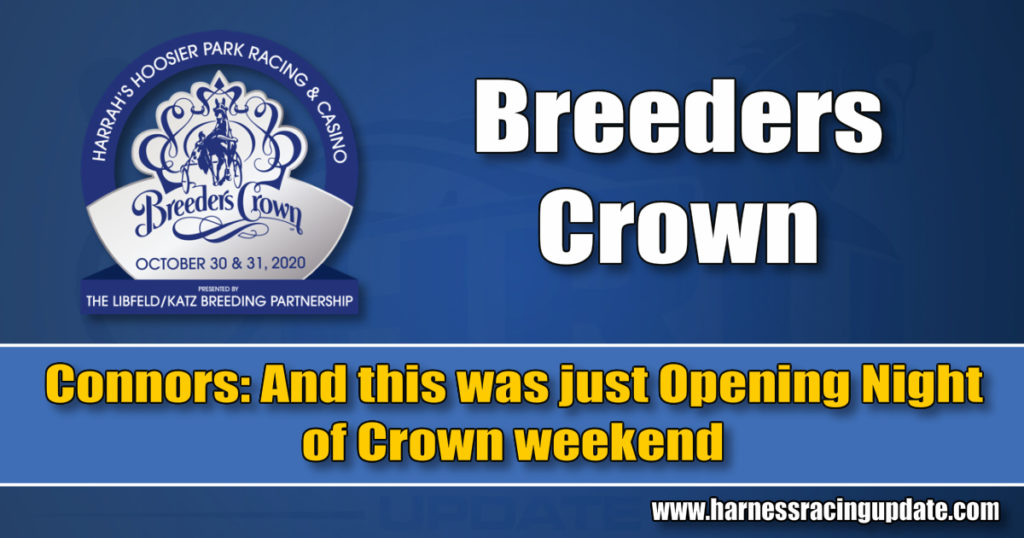 And this was just Opening Night of Breeders Crown Weekend

The first dead heat in Breeders Crown history wasn’t the only incredible thing about Opening Night at Harrah’s Hoosier Park.

There were two Crown championships on the pace Friday, but three track records were recorded. The four championships produced margins of three quarters of a length (the biggest of the four races), a half-length, a head – and a dead heat (thus setting two track records). It was the first dead heat to win in the history of the Breeders Crown.

Perfect Sting looked like he had fought off arch-rival Southwind Gendry and was going to win and give David Miller his second Crown of the night and cement his spot in second place in Crown earnings. And he did, only Summa Cum Laude was flying late and earned the tie in the last step for Brian Sears, the second-winningest driver in Crown history. Joe Holloway and Ron Burke, the respective trainers, and all the owners are veterans of the Breeders Crown. (And further consolation for the Burke Brigade: Southwind Gendry got beat only a head for it all. Not that they need it after having a 21-1 victory.)

The colts made the head win of Fire Start Hanover seem like a romp for Dexter Dunn and Nifty Norman, but JK Alwaysbalady, daughter of Horses of the Year, did her parentage and connections proud, too. Fire Start Hanover’s 1:50.4 win put her next to Glorious Virgin on that line in the Hoosier record books.

On the trotting side:

David Miller won four Breeders Crown eliminations last weekend, and he continued to be in sparkling form at Harrah’s Philly midweek, with three wins on each of Wednesday’s and Thursday’s cards – on the latter day rallying one maiden trotter from 22 lengths behind at the half, unheard-of at the speed-favoring southeast Pennsylvania oval.

Perhaps his best recent drive of all came behind Lady Chaos in winning the Crown baby filly trot. Having raced up to the lead and having Presto moving strongly to them, Miller calmly told Lady Chaos to let the other filly go without a fight into the far turn while keeping her up on the bit. The pair then found room up the inside in mid-stretch and out-trotted their opposition to the wire. The victory was the seventh Crown for Hall of Fame trainer Linda Toscano, putting her within the Top Ten (including ties) all-time in Crown training victories.

Bob McClure also had the best seat in the house behind On A Streak in the pocket in the companion colt event, watching Captain Corey and favored Venerate slug it out, then ducking to the passing lane and having the most late in setting a record for this divisional Crown championship in 1:52.4, a tick better than Walner (trained, ironically, by Toscano), even though the temperature was under 40 degrees at post time. McClure won his first Crown; owners Determination and trainer Luc Blais had been there before, most notably with two-time Crown winner Emoticon Hanover.

One of the greatest rivalries for almost the length of the Breeders Crown series has been the battle between Hanover Shoe Farms and Brittany Farms for the most Breeders Crown championship breeding victories. Hanover bred Fire Start Hanover, so they doubled their lead over the “friendly rivals” to 27-25…for about 50 minutes.

Then the DEAD HEAT light went on, and Brittany Farms were partners in the breeding (and the owning, thank you very much) of Perfect Sting, so we’re back to a separation of one again, 27-26.

May these heavyweight breeders continue to battle for many more Crowns to come.

Post two, so hot last weekend with eight winners in 29 races? Before Perfect Sting, the second slot had gone empty on the night. Post four and five, which are 1-2 over the Hoosier season but only produced three and one success(es), respectively, last week? Each had three triumphs on the Friday card.

Early leader in the clubhouse for “Wish He/She Was In The Breeders Crown” would be Shishito, the 3-year-old trotting filly. The night last week before the rainy eliminations, the Father Patrick filly went wire-to-wire to win a Circuit City stake division in 1:52.2, which equaled the divisional track record (which was set in 2019 and equaled two weeks previous to her race). On Friday, she was entered in the Pegasus stake, and all she did is come out of the pocket to win again – and again in 1:52.2, equaling her own track record! And the stake record belongs to Shake It Cerry – in 1:52.2.

Shishito won $240,512 at 2, and made the Breeders Crown final, although a bad post really hurt her chances. She was eligible this year, but after racing creditably in Pennsylvania she had to go to the sidelines for 42 days after an Aug. 30 race. Shishito picked a bad time, the “Should we go to the Crown?” time, to hit a dip – but she certainly is rebounding quite well right now.

The racing fans really responded to the quality racing offered at Hoosier, and even raised their levels on 2-year-old trotters – because they were Breeders Crown races. The Breeders Crown pacers, helped by a Pick 4, lured even more. A rough and unofficial tally done under pressure yielded an approximate figure nearing $1.7 million. It might have gone a mite higher, but deadline is looming.

My old friend Yankee Bounty, now 8, was in to go Friday in a Hoosier overnight, but was scratched. I remember this horse winning his first eight starts as a baby in 2014, including the PA Sire Stakes Championship – but his last two PA Sires wins were by a neck and a nose, so when he came to Philly and was 1-20* in a stakes race, I tried to beat him with a horse named In The Arsenal, who did pull off the upset that day at 9-2 (maybe the last time I actually beat a favorite with a decent-priced horse on my Philly tip sheet). In The Arsenal would go on to be 3-2 in his Breeders Crown and win over a million dollars lifetime.

And of course, now center stage are tonight’s plots:

• Kissin In The Sand, riding the momentum to lead her division, or Shartin N, the dominant force most of three years, taking back the ascendancy?

• Gimpanzee vs. Atlanta – and has Ramona Hill built up too big a lead in Trotter of the Year consideration? (Not according to the Top Ten polls).
• Party Girl Hill vs. Tall Dark Stranger, in different races, for Pacer of the Year and perhaps Horse of the Year. (And will they race again this year? And does that depend on what Bettor’s Delight does tomorrow night? And who will race against whom – or the 3-year-olds against olders, if the TVG entries allow?)

That’s eight out of this week’s Top Ten horses, in three acts tomorrow. You don’t have to be a fan of Shakespeare to appreciate the drama to be played out on the Hoosier Park stage tonight.