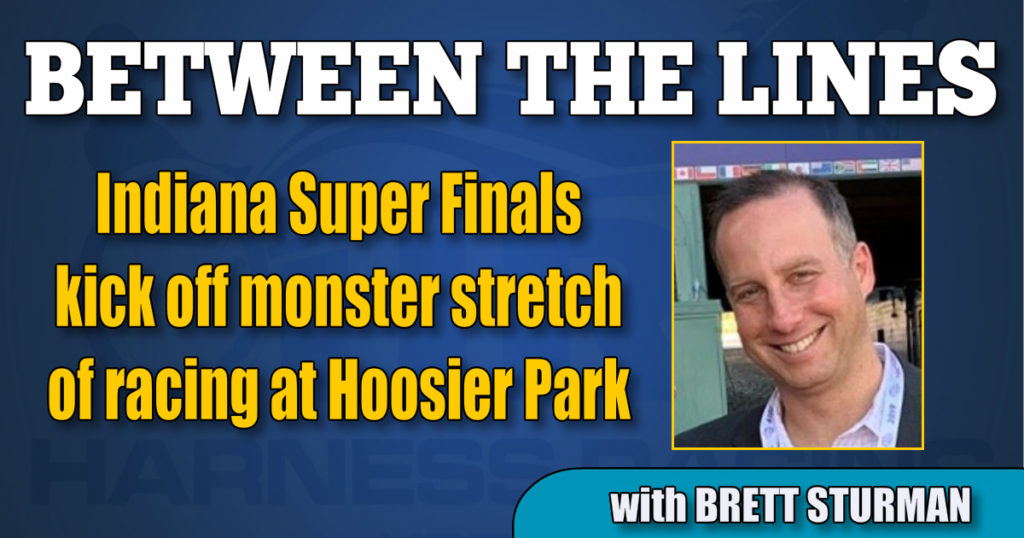 In a season that’s completely flown since its restart in June, Breeders Crown elimination races at Hoosier Park loom just one week away. But first, Indiana-sired 2 and 3-year-olds will have a chance to shine over the course of eight $270,000 Super Finals tonight totaling over $2.1 million in purses.

Throughout the sire stake final races, an overriding theme is the value that these Indiana-sired horses provide. Not only were many competitors throughout the finals modestly priced yearlings, but young horses from the state have proven they’re good enough to go with open stakes competition too. An example comes in the form of race favorite SOMETHINGBEAUTIFUL. A $30,000 Hoosier sale yearling, she’s a half-sibling to over $750,000 career earner Shnitzledosomethin. Perfect in Indiana-restricted competition, Somethingbeautiful’s only loss came two back in the Kentuckiana when she was second to the standout Test Of Faith. She goes from regular driver Lewayne Miller to Tim Tetrick and will be tough to beat despite starting from the outside post. HOT MESS EXPRESS gets her fifth crack at Somethingbeautiful and is another that gets a noticeable driver change; this one to Andy Miller. SOMETHING TO ME was a 1:51.4 winner two back and gamely chased home Somethingbeautiful last out after picking up her cover around the final turn. GD ROCKIN KAY tried to rally up the inside last and can close to land a share. JK SHE’S GORGEOUS may be better served to change tactics and come from off the pace; I doubt she can beat last against these on the lead.

Maybe easy to say now but it’s still hard to believe that BRECKENRIDGE paid $13 last week considering he had won three straight ISS races prior – and all at shorter prices than last weeks. In that race last week, Shetler wanted the lead from the start and he was proved right when gaining the tactical edge throughout the race and holding off a late charge; exits a lifetime best mile. BROOKVIEW BOLT was rallying late up the inside last out and seemed to flatten just a touch after looking like he was en route to getting up. That was the second time in three races he was closing but not quick enough against Breckenridge; good matchup coming again. ILLINI EARL looked like a winner against these four races back after taking the lead in the stretch only to then tire. He’s since won twice and then closed last out with some enthusiasm. SWINGFORTHEFENCES wasn’t far off Brookview Bolt on a couple prior occasions and then was able to tow along last out to produce a fast time in Lexington. BRIDGE TO SUCCESS rates an outside chance.

GRACE ROCKS enters her Super Final for 3-year-old fillies in raging form and has turned into quite a killer over her last few starts. After posting back to back 1:49.2 and 1:49.4 miles, she won last out under total wraps while all others chased futilely. Will warrant a short price despite starting from the outside post 9. SOMEBODYSLILLY took a first over shot last out against Grace Rocks but you never got the impression she was going to get close and then tired in the stretch. She was much better two back and would need to bring her very best to compete for the top spot. GENIE ROCKWELL went a 1:49 mile three back but then was no match whatsoever for Grace Rocks when she gave way from the pocket. She did rebound however in her most recent and is another that can’t afford anything less than her best. MYSTICAL CARRIE did okay last week when she tipped wide from last to just get up to be second in a blanket finish. PRICELESS didn’t have much to offer in her last few but took a good amount of tote action last out against Grace Rocks, discount connections at your own peril.

COUNTRY GIRL CHARM costs just $6,000 as a yearling last year at the Hoosier sale and responded powerfully to racing first time with Lasix; albeit it came in a race where everything broke her way. From the second crop of sire Whom Shall I Fear, she has speed to overcome the post and is dangerous if that good again. SHIRLEY GOODNESS couldn’t be any more consistent having posted four straight miles and all in the 1:55 range; fastest on paper and is the one to beat. SWIFT SWANDA is suddenly a much tougher call. Any number of her previous miles would be good enough to compete, but she looked empty last week even before the break. At least offers a price now. BAD SHOT and FOUR UNDER PAR starting next to each other in posts 5 and 6 amuses me; doesn’t seem like their names go together and both would need to go a couple steps quicker than they’ve gone before.

MAY BABY was one that I liked in the Hambletonian Oaks when she came off that first-over try the week prior against Hypnotic Am. The trip just didn’t work out at all for her in that race and she’s been utterly dominant since; would take something unforeseen for her to lose. ROCK SWAN actually beat the top choice once back in August but was gapped out every step against that same rival last week, and PHABAJ was about equally a gapped out third in that same race. PRETZEL PARY is a longshot that might be able to save ground from the second tier and then try to close; has shown flashes of potential on occasion. QUEEN MARGHERITA closed to score last out; WOODSIDE DATENDIVA rallied to be second to that foe and out-closed her by nearly a full second.

JK GOING WEST is another inexpensive yearling with a chance to take home a big purse. Having cost just $12,000 at the Michiana Classic Yearling Sale, he was ultra-impressive last out. He left hard into a :26.2 opening quarter and was forced early to have to settle for third. Despite the trip he was able to out-finish VIRGO who popped pocket after getting the two-hole trip to win in a career best 1:51. BROOKVIEW BULLET didn’t have much resistance to offer in the stretch last out and that was a surprise. That had been his first start in three weeks and he was awesome prior to then; another tough call. WHAT’S YOUR BEEF took advantage of a softer field last out and won easy as the heavy favorite; maybe a play-against despite going for Brian Brown if the price is too short. HE’S GONNA GETYA had some late pace to offer up the inside in his most recent race; would be quite a spot to break the maiden. ROGERS IMAGE made a belated surge in his most recent; wouldn’t be a total shock.

It didn’t look like Oosting had to move a muscle last week on EMMA TOWN BUD in posting the easiest type of score. It’s too bad the gelding by Big Stick Lindy broke in the Old Oaken Bucket at Delaware but he’ll make amends here. Conversely to the top choice, BLUEBIRD DEACON was under an all-out drive last week and couldn’t do anything against that foe. SWAN IN MOTION was favored against Emma Town Bud in August but probably shouldn’t have been; I didn’t think he was particularly great last week in his first start from the layoff. DUDE INCLUDED had good trot on both ends of his mile two back.

The star of the night could be ODDS ON OSIRIS. Milstein winner from August didn’t disgrace himself in the North America Cup and then crushed last week in 1:49.3 and with broken equipment no less. CLEVER CHARACTER was a first-over winner in his most recent and prior he angled out in the stretch and took a mild chance against the likes of No Lou Zing. SAWYER’S DESIRE got somewhat of a shuffle last out after brushing to the lead; had some minor late pace to get up for second but would have never gotten to the big favorite regardless. CROOK BOYZZ arrived late on the scene last week and prior to that tried to give Odds On Osiris a run.