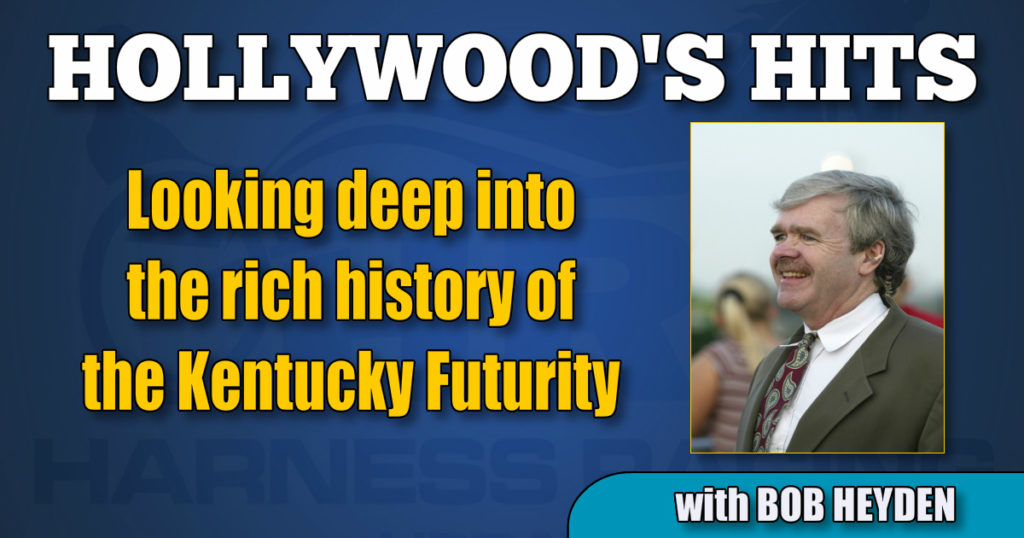 Looking deep into the rich history of the Kentucky Futurity

The first Kentucky Futurity was contested on Oct. 9, 1893 for a purse of $11,950. Seven colts and four fillies entered and the winner, Oro Wilkes, was a son of Sable Wilkes that stud for a $50 stud fee at Cruikston Park Stud Farm in Ontario.

The second Kentucky Futurity, held on Oct. 8, 1894 marked the first filly winner, Beuzetta. The purse was $31,340 that year and nine horses went postward — four of them fillies.

In the third and fourth years, four wins were required to claim the Futurity.

In 1895, Oakland Baron dead-heated in an early heat, but back then that was not considered a win when judges were tasked with having a horse have a “clear victory.”

Latrina, the other dead-heat winner, went 6-5-6 in the other three heats.

In 1896, Myron McHenry, who drove Dan Patch the following decade, won the Kentucky Futurity the same year Dan Patch was foaled. Rose Croix got the best of 10 other opponents and was the first roan to win it.

Other Futurity facts through the years

• Bi Shively was 74 when he won it in 1952 with Sharp Note, who also won the Hambletonian. The Spanish-American war veteran never appeared in a Kentucky Futurity until he was 74 and none after.

• Billy Haughton never won the final of the Kentucky Futurity as a driver. In 33 Futurity races, his record was 1-6-9 with his only heat win coming with Cold Comfort in 1977. Yet his sons won three finals in a five-year span: Peter won with Quick Pay in 1976 and Doublemint in 1978. Tommy won with Final Score in 1980. The Futurity is the only Triple Crown event in which Billy Haughton did not have a driving win.

• Howard Beissinger won the Triple Crown in 1969 with Lindys Pride at the age of 46 in his debut year in the Kentucky Futurity. But, he never won another heat of the Futurity and ended up with a record of 2-0-2 in 19 starts.

• Ben White was the first back-to-back winner of the Kentucky Futurity. He won in 1924 with Mr McElwyn and 1925 with Aileen Guy and had a career record of 15-6-2 in 38 Futurity starts.