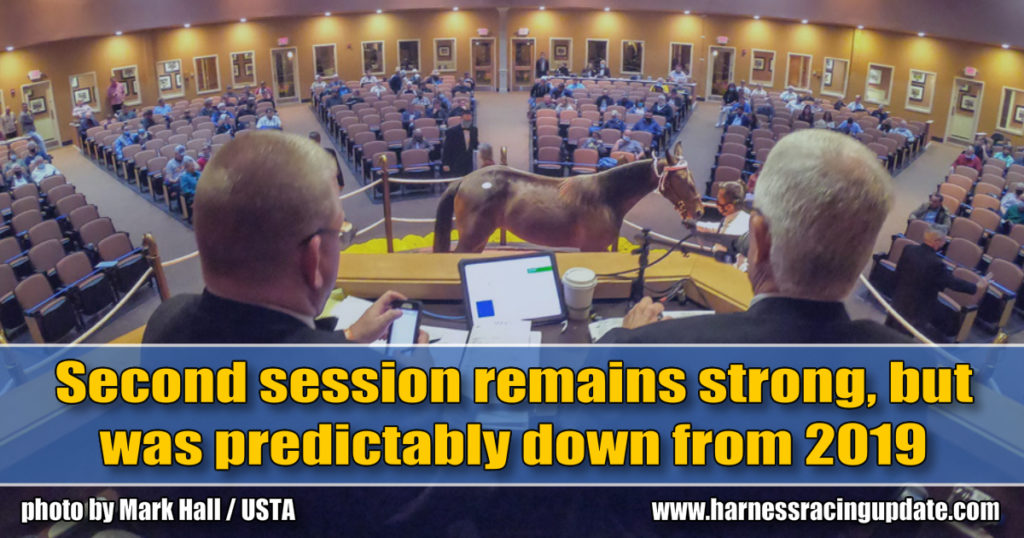 Second session remains strong, but was predictably down from 2019

The second night of the Lexington Selected Yearling Sale saw the average down 18 per cent and the gross down 14.5 per cent compared to the same session a year ago. Still, a gross of more than $11 million and an average of $61,718 are solid numbers during a pandemic.

The second session of the Lexington Selected Yearling Sale — held Tuesday (Oct. 6) at the Fasig-Tipton sales pavilion — was down 18 per cent in average and 14.5 per cent in gross compared to the second night of the sale in 2019.

Despite the decline in numbers — which was expected during a global pandemic — Randy Manges, whomanages the sale with David Reid, said the results have been beyond his expectations.

“With everything that’s going on in the world, I think they’ve been terrific,” Manges said, adding that he was pleased there was consistent economic activity throughout the second session.

“Consistency in the prices, in the activity and everything. That’s what we’re looking for,” Manges said.

Manges joked the session was, “long,” but he was pleased with the crowd and the prices.

“I thought it held up well again tonight. There was a lot of activity on the online service and we sold quite a few on there, I think.

A rep for online bidding company Proxibid said 13 horses, including the session-topper, were sold to online bidders on Tuesday for $825,000 in total bids. Through two days, $1.1 million has been grossed through online bidding.

Reid said that considering the challenges presented by the COVID-19 pandemic, the sale’s flow was good.

“With the expanded bidding areas and the online… maybe it’s just a tick slower, but, that being said, I think it’s beneficial for a lot of other people. We’re achieving good results under the situation and we’re just going to have to adapt,” Reid said.

“There was definitely a lot of activity on the Internet tonight,” Reid said, “and I would assume that’s going to continue that way the rest of the week.

“It results in more bids for the sellers and results in more satisfied customers for people that can’t be here. We just hope that the platform works to their satisfaction and we’re happy to have them engaged and enjoying the option.”

Trainer Tony Alagna said he, “thought it would be very spotty tonight and it has been. You can’t hide a good horse and good horses are always going to sell for good money. There’s some middle-of-the-road horses that were good value, good buys, and I tried to buy them.

“I’m a value shopper and there was a colt that sold earlier in the session for $17,000 that I thought was a very nice colt, so I try to find value where I can do the most with it. I don’t buy anything that I haven’t seen or turned out or like the pedigree and the individual and hopefully it all works out.”

Kentuckiana owner and general manager Bob Brady said, “It’s a very strong sale, very strong market, quite active bidding and buyers and I think we followed that up tonight. It’s a little spotty in different places, but a quality horse is bringing what they are worth. I think the most important part is, under these conditions and the kind of year that everybody has had, we just really appreciate all the support. People showed up and actually participated and made it a really successful sale.

“To be able to come back and have the second-best opening night in history (Monday) night, it says a lot about the industry. There’s a lot of positive things going on. In particular, the Kentucky program is taking a really big step in the right direction.”

Northwood Bloodstock’s Bob Boni said the second session was a good one with the numbers holding up.

“I don’t know what anybody’s expectations really were coming here, but I think it’s been pretty much a normal sale,” Boni said.

Last year, 108 yearlings sold for $100,000 or more through two sessions. This year, 91 yearlings have reached at least six figures through two days.

The second-session topper was Hip# 277, a Captaintreacherous filly out of Injeanous Style named Style For A Mile that sold for $225,000 to Dana Parham of Boca Raton, FL. The pacer was bred by All Four Won stable of Lexington and raised and consigned by Kentuckiana Farms.

“She’s just a gorgeous Captaintreacherous filly. She has a Betting Line 2-year-old that’s already gone in :51 and Tony Alagna trains it,”said Brady. “She is just a gorgeous, correct filly with an awesome video.

“On paper, there’s a lot of depth to the pedigree. You get back to having Delinquent Account on the page and that’s just a matriarch of a lot of top 10 horses. The session topper? I don’t try to speculate on that. We just try to raise a good horse and hopefully get a fair price for them. I knew she was going to sell fairly well.”

Hip #288, a Huntsville filly out of Big Mcdeal named Max Contract, sold for $200,000 to Andy Miller Stable. The filly was bred and consigned by Cameo Hills Farm of New York.

Hip #314, the third last horse to sell on Tuesday, fetched $200,000, as well. The Chapter Seven colt out Mrs Frank named Zappa was raised and consigned by All American Harnessbreds and sold to trainer Marcus Melander, agent for SRF Stable.

Two yearlings sold for $190,000 — Hip #225 Muscle Mavarick, a Muscle Hill colt out of Ava Marion consigned by Preferred Equine that was sold to Bill Donovan of Delray Beach, FL. and Hip #164 Clenched Fist, a Walner colt out of Smexi purchased by Andy Miller Stable, Inc. out of the Kentuckiana consignment.

“He’s a really nice colt,” Brady said. “That’s a Walner colt out of the mare Smexi. who made half-a-million dollars. He was just a very athletic colt, very sharp looking and got over the ground the right way with a lot of trot. So, we wish them the best of luck.”

Miller said Clenched Fist, “was one of our picks for the night, so we went after him a little more aggressively… We went out to Kentuckiana and looked at him a couple of times and turned him out and really loved him.”

“We didn’t have that many tonight, but she’s a very, very sharp, very racy filly,” Boni said. “It’s a big pedigree, with a Breeders Crown winner, so that alone is going to step her up and she’s a very athletic filly.”

Andy Miller was the biggest buyer on Tuesday with $792,000 spent on nine yearlings.

Alagna, who is eighth among buyers with $702,000 spent, total, on 10 yearlings through two days, said his purchasing decisions depend on what he’s already acquired.

“The first two days we kind of picked out what we were going to take a run at and every horse we buy dictates the next one we buy, so if we end up with three pacing colts or pacing fillies or whatever, then we’re trying to fill slots with the opposite,” Alagna said.

Preferred Equine led all consignors Tuesday with $3,055,000 in sales for 42 yearlings.

“It was a fast and furious night with a lot of head going through the ring, but overall I think we had a reasonably good night,” said Reid, wearing his Preferred hat. “I definitely felt there were some pockets or some spots when it was just getting a little pickier, maybe poor placement on my part or whatever, but overall I still felt it was fairly healthy.”

“The catalogue is very good this year, the quality of the horses is good,” Manges said. “We’ve got some new sires, that always helps. And the catalogue holds strong, through (Wednesday) and Thursday. Then there’s a whole new set of circumstances with the regional horses and we have a really good bunch of Ohio-bred horses. We don’t have as many Indiana horses, but there’s some good ones. We’re very pleased with the quality of the book this year.”

Tonight’s (Oct. 7) third session of the Lexington Selected Yearling Sale will feature 181 yearlings. It begins tonight at 7 p.m. at Fasig-Tipton. For more information about the sale, please visit: http://www.lexingtonselected.com.