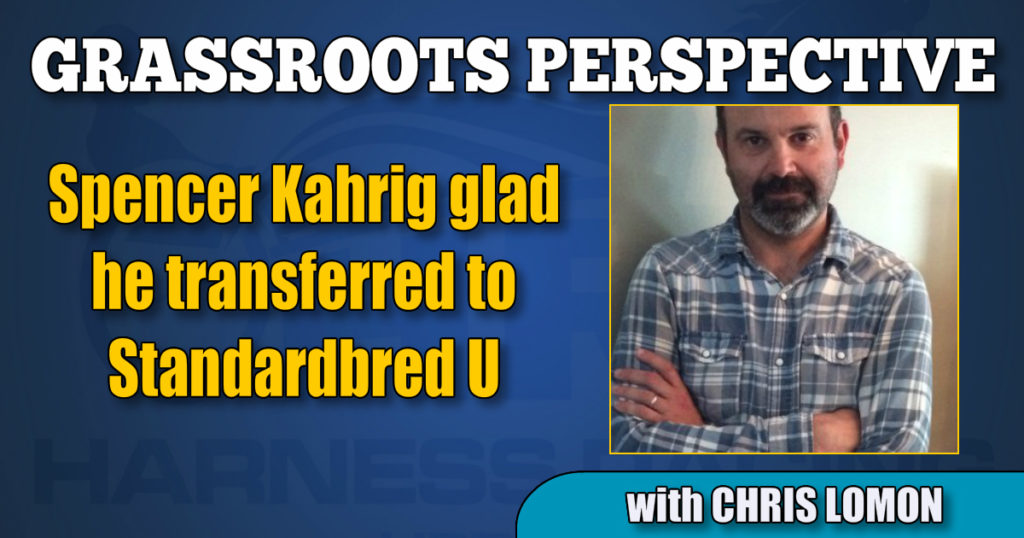 Spencer Kahrig glad he transferred to Standardbred U

The college life wasn’t for him, but Spencer Kahrig is a proud graduate of Standardbred U.

It didn’t take the teenager from Washington, PA that long – perhaps around the same amount of time between the first and last race held on a typical night at The Meadows – to realize the pursuit of a college education wasn’t an ideal fit for him.

Fortunately, he knew what course he wanted to take.

“I decided to go to college, but I knew pretty quickly it wasn’t going to be for me. After a semester, my parents, my uncle Rod [Bolon], and my aunt Sally bought a horse together, and that just sparked something in me. So that was the end of college. I stuck it out for a semester and it wasn’t for me. By that winter, I was back working for my uncle.”

This time, it felt just like home for Kahrig.

He had been around racing his whole life, and after his brief collegiate experience, the thought of pursuing a career in standardbred racing became much clearer.

“Both of my great uncles, Rod and Benny Bolon, I grew up watching them race at The Meadows. I was raised here in Washington [PA], so I watched a lot of races. My dad has been a cameraman for The Meadows racing since the late 1980s, so I’ve been around the racetrack for as long as I can remember, in some way or another, either watching them or coming to work with my dad. Even when I was young, I loved being around the horses.

“When I was 16, I started working for my uncle Rod during the summers. My cousin and I bought a horse together a couple of years after college, and then my dad and I got a horse together, a cheap claiming trotter. That’s how I got started, and that’s how I met my wife Dana. It was around 2010 and 2011 when we met and we got a few horses together. Now, her and I have anywhere between 12 to 18 horses a year. Currently, we have 16. I own a couple of those with my dad. He still helps out. He still does the camera work, but he loves being involved with the horses. It’s a busy life, an all day, every day, type of thing. But everything I have in my life, I owe to harness racing.”

It truly is a family affair for Kahrig, who recorded his first training win on Dec. 7, 2006 with Katiesgonnacatchya, a horse he also owned.

Whether it’s vocal support or hands-on help, he has plenty of people he can count on.

“My grandma and her sister, they watch the races pretty much every day. My dad helps out. Dana, her dad helps out too. When he’s not working his regular job, he’s helping us jog horses in the morning. My sister-in-law, Dawnelle Mock, she’s the marketing director with The Meadows. She also helps us in the morning. Her boyfriend Johnny Yoder helps us during any of his free time. My sister is just a big fan… she’s been my No. 1 fan for a long time. My mom and Dana’s mom, their support for us is 24/7. One way or another, everyone is there for us. And that means a lot.”

Kahrig, who has also dabbled in driving – his first driving victory came in 2007, in only his third pari-mutuel drive, with Time To Speak, a horse his mother Kara Kahrig co-owned along with driver Kyle Bolon’s mother, Sally Bolon – has posted the best numbers in his career over the past three seasons.

Reaching those plateaus wasn’t without its challenges.

“I would look at 2017 as our best year. The next year, it wasn’t a bad year either, but The Meadows got hit with the herpes virus, and our barn was shut down for a good while. Having a small stable and owning a lot of them yourself – that did some damage for us. But it also did damage for a lot of other people, too. Then we’ve had to deal with the coronavirus this year. When you own a lot yourself – we have other owners and I’m grateful for them – it’s like being a small business owner, that’s how I take it as. It can take a real toll on you.”

None of it, however, is enough to put a dent in Kahrig’s love of the sport.

When the Kahrigs aren’t working from sun up until sun down with their horses, the couple spends as much time as they can with their soon-to-be 3-year-old son Austin.

There are early indications the youngster could follow in his parents’ footsteps.

“He gets pretty much all the attention from us when we have our down time in a day. He’ll watch any race and not just the ones that we’re racing in. He’ll root anyone on. You just tell him which horse to root for and he’s your biggest fan for those two minutes, that’s for sure. You never know if he’ll have a career in the industry. Some days, I hope he does and some days I hope he doesn’t.”

If Austin Kahrig decides he’d like to give a life in standardbred racing a shot, his father will remind that it’s all about going forward.

He’ll also share what keeps him coming back year after year.

“I love the competition and I love doing what I do. The competition really motivates you. And I really enjoy racing at The Meadows. It’s year-round and the purses are pretty good. It’s a good place to be.”

Much better, Kahrig said with a laugh, than listening to a lecture in college classroom.

“I made the best decision based on what I knew would be the right path for me. Sometimes, certain things in life take a while to figure out. But I was able to, and I have no regrets at all. I’m part of an industry that I really enjoy. It’s hard work, but that’s fine. I don’t mind it all. For me, every year, you just try and improve, learn more, and have better results on the racetrack.”

It’s a philosophy that Spencer Kahrig deserves top marks for.