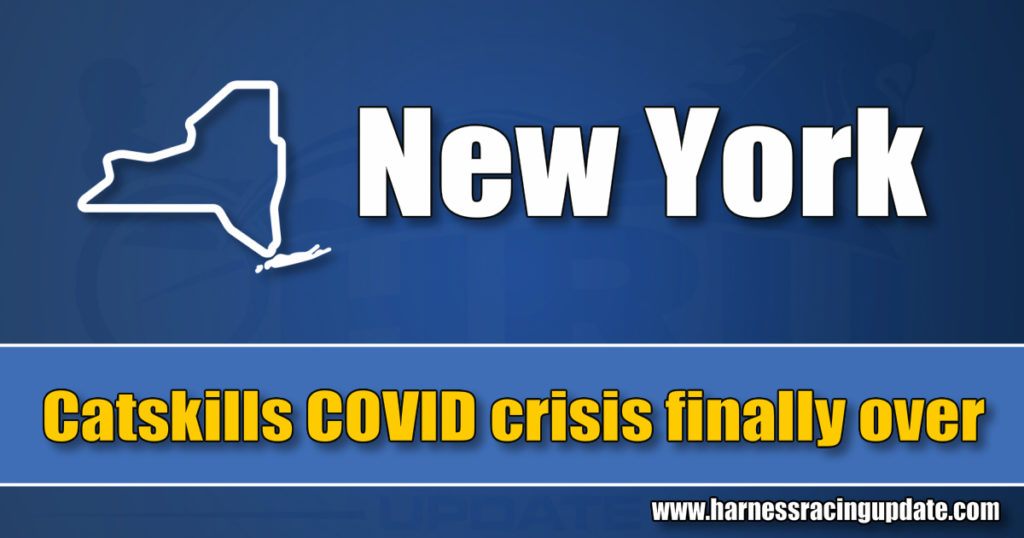 Local horsepeople are relieved Monticello Raceway will reopen on Monday after being dark to racing for six months while its casino was closed.

Harness racing’s crisis in the Catskills is finally over.

According to Monticello Harness Horsemen’s Association (MHHA) general counsel Joe Faraldo, based upon a gentlemen’s agreement, Monticello Raceway will reopen on Monday (Sept. 21).

“I believe that someone said to them, ‘We’re not going to let you open unless you’re going to have some sort of agreement with these horsemen,’” Faraldo said. “Because the attitude that we were facing went 180 [degrees].”

“The Monticello Raceway has a long and storied history in the Catskills, and we are excited to reopen the track in the coming days. The reopening of Monticello marks another important milestone in moving New York forward and we are extremely fortunate to have the support of the community and our local and state leaders as the region’s economy begins to recover.”

Monticello held qualifiers yesterday (Sept. 14) and is scheduled to hold more if needed today (Sept. 15). When racing resumes next week, they’re expected to go back to their usual four days a week, nine races a day, provided they can fill the races.

“I know one thing: those guys are all chomping on the bit to go,” Faraldo said.

One reason the Monti horsemen are raring to go is because they were sidelined longer than any other track in North America.

“[The other tracks] hadn’t raced for three months and we haven’t raced for six months,” said Jim Doherty Jr., one of the top trainers at the Mighty M.

Doherty, who grew up in the business as the son of Hall of Fame trainer Jim Doherty, had about 23 or 24 horses stabled at Monticello Raceway when the coronavirus pandemic closed the track in mid-March.

Doherty tries to structure his stable so that his horses pay for themselves. He doesn’t keep a horse in the barn if it can’t pay its way, but when COVID-19 shut everyone down, his system didn’t matter anymore.

“I had one guy who owned 100 per cent of a horse. He did it for a few months and he said, ‘Listen I can’t do it anymore,’ and he sold the horse and I don’t blame him,” Doherty said.

Doherty was lucky to keep most of his horses, thanks in no small part to help given out by the MHHA.

President of the MHHA, Alan Schwartz, said it was a no brainer to him, when this pandemic hit, that his group had to look out for their own. As a former marine who served in Vietnam, Schwartz knows all about looking out for his band of brothers.

“These guys will have absolutely no money coming in and a lot of them struggled when they were racing,” Schwartz said. “How are they going to care for the horses when they’re not racing?”

The MHHA paid for all the feed, hay and straw during this period, so the horsemen stabled at the track wouldn’t have out of pocket expenses.

Horsemen also received some financial support in the form of a total of three stimulus checks to the grooms, drivers and trainers.

“If we hadn’t received those funds and that help, I wouldn’t have been able to have 20 horses six months down the road,” Doherty said. “I would have had to sell one every couple of weeks to support my employees and feed my remaining horses. I’d probably have five horses or seven horses now.”

In addition, the Monti horsemen also had some food donated to them thanks to owners and amateur drivers, David Yarock, Mal Burroughs and Bob Krivelin.

Yarock is the president of the GSY Amateur Racing Club, which created a scholarship fund in 2008 and has given away over $200,000.

“This year, instead of scholarships we gave out aid, because people had other issues,” Yarock said. “They needed to survive.”

Yarock reached out to Krivelin, a food distributor, who sells food to restaurants, universities and hotels, among others.

“[My business] was down 75 per cent at that point and I didn’t know whether I was going to survive, but I knew that the people in Monticello were in worse shape than me,” Krivelin said.

In addition to Yarock, Krivelin said he was also contacted by Hambletonian-winning driver Burroughs.

“I said, ‘Can I help?’ He said ‘Sure. Send me some money and I’ll buy some food and give it to them,’” Burroughs said. “[Monticello] is where I started with Distant Thunder and Bones Vaughn. That was my home base for a few years.”

Even though Krivelin wants to give all the credit to Yarock and Burroughs, it should be pointed out that he offered the food at cost in addition to donating some himself.

“I felt it was important to help them as much as I possibly could because I love the industry and I’ve had a lot of luck and a lot of fun,” Krivelin said.

Once racing was allowed to reopen in New York and neighboring states, things unfortunately did not get better for those at Monticello since their track remained closed and they were not welcome elsewhere.

To be fair, some of the Monticello horses weren’t good enough to race at the other tracks, but for trainers like Doherty – who had horses that could compete elsewhere – it was very difficult.

“Many tracks had local preference for the first 30 days when they reopened and then they would only take entries as needed,” Doherty said. “So, I would enter half a dozen horses and maybe one of them would get in and it wouldn’t be every week.”

“It was very difficult not being able to race at other tracks even when they didn’t have a full field of horses,” said owner Adam Friedland. “You’re not even filling your card and you won’t let us race?”

Driver Bruce Aldrich and his fiancée, trainer Laura Perino, said the whole experience for them was very stressful.

“It’s been six months of working on them every day for nothing, for no money because they didn’t have the chance to earn any,” Aldrich said. “I’m just glad it’s over.”