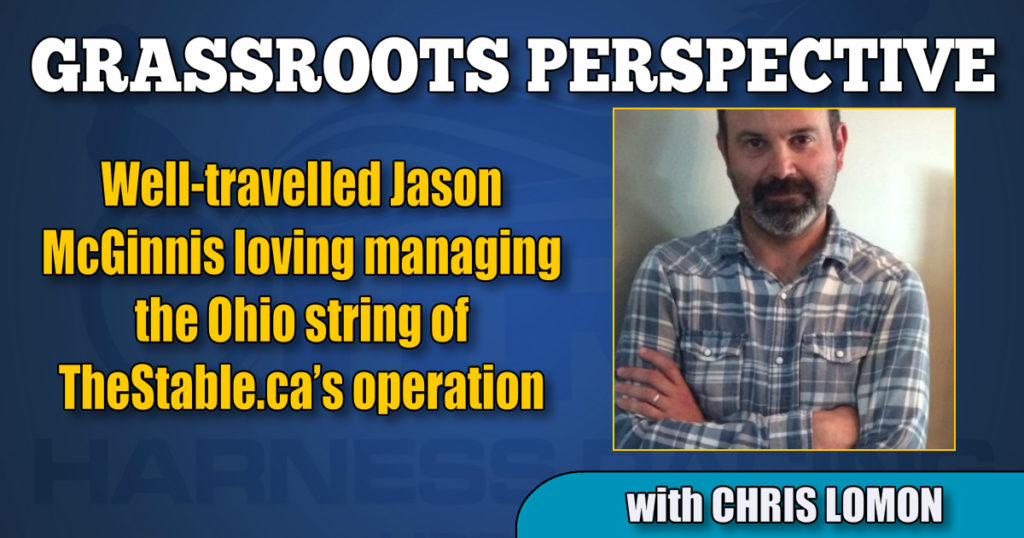 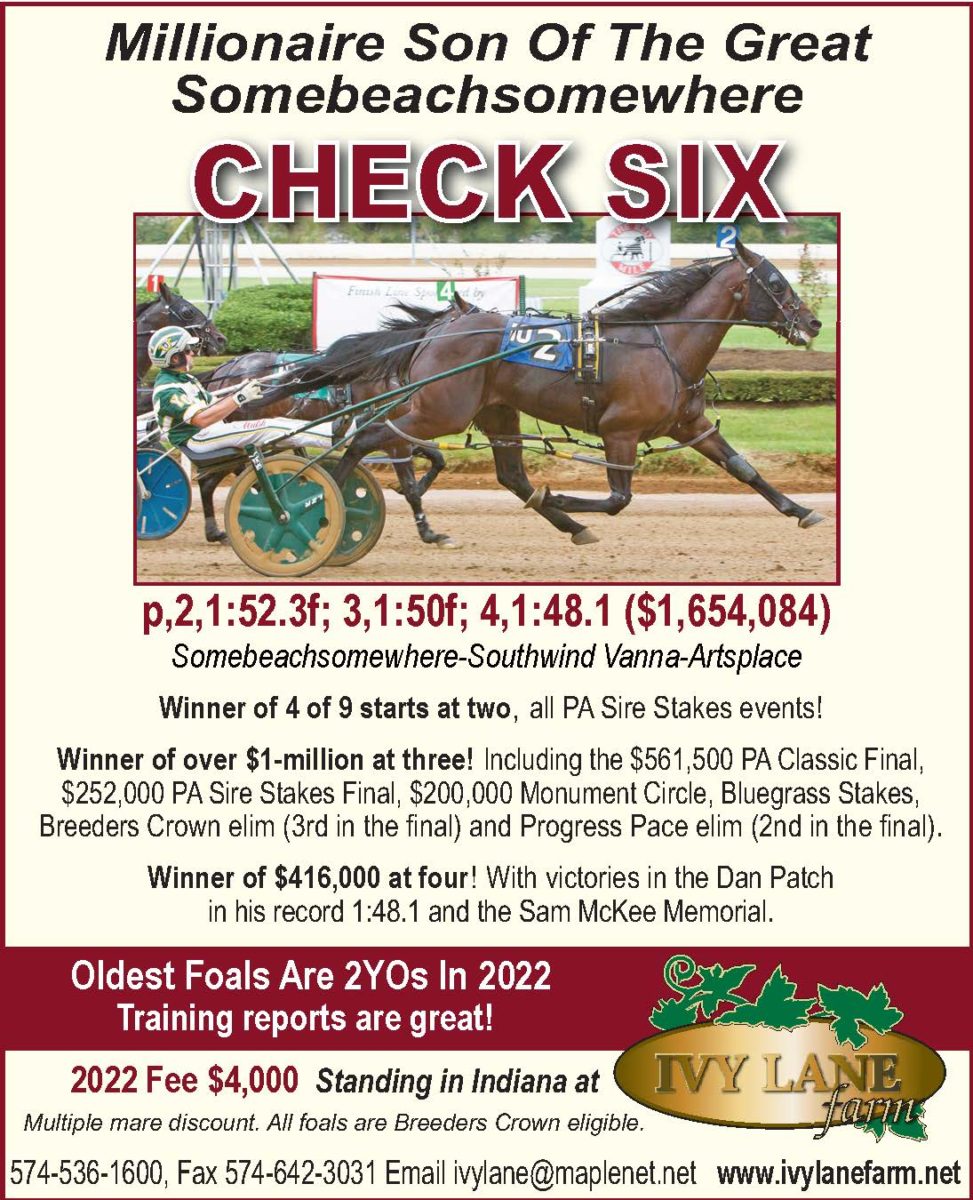 For Jason McGinnis, the road more travelled has led him to where he always wanted to be.

When you tell the story of the man who trains TheStable.ca’s string of standardbreds at the Northfield Park, there first needs to be a geography lesson of sorts to explain how he wound up at the half-mile oval in Ohio.

“I was born in Windsor, NS, said McGinnis, of the eastern Canadian town with a population of roughly 3,700 people. “My family and I moved to Saskatchewan when I was six. So, we moved out there, and then we moved to Ontario when I was 10. I’ve been based out of Ontario – I’m 41 now – for the last 31 years. My father had his own horses that he raced, and he and I also owned horses together.”

The younger McGinnis’ interest in harness racing continued to grow with each passing year.

Thirteen years ago, he went to work for accomplished trainer Erv Miller, a job he kept for three years.

“From there, I went out on my own again and had a small stable. I bounced around a little bit – I worked for [trainer] Tony Alagna too. I met Tony when I worked for Erv. When things took a turn for the worse with the cancellation of the Slots At Racetracks Program in Ontario, my own stable… it was just tough for people with smaller stables. I then went on to work for [trainer] Blake McIntosh for a bit.”

It was around four years ago when McGinnis, who had known trainer/driver Anthony MacDonald for some time, ran into the horseman behind the popular fractional ownership group, TheStable.ca.

That conversation would put McGinnis on a career-altering course.

“Anthony, who I’ve known for years, has driven for me in the past, His brother, Mark, has driven for me as well. I’ve used James a lot, too. So, all three guys have sat in the bike for me. Anthony and I were having a chat, and he asked me if I wanted to come work for him. So, I did. And now, this is my third summer in Ohio.”

With the geography lesson complete, math now becomes a focal point of the McGinnis story.

In the three years he’s been stationed during the summer months at Northfield, he’s enjoyed great success.

Closing in on 800 career victories, McGinnis won 76 races in his first two campaigns in the Buckeye State.

“I think it’s been good for everybody. We’ve had some good success down here. We won some stakes, had some nice horses, and went on some pretty nice runs here.”

Some of the horses of note include Globetrotting, a 3-year-old trotting daughter of Manofmanymissions (OH).

The filly, bred by Steiner Stock Farm (Lima, OH), has five wins, three seconds and a third from 15 starts for TheStable.ca.

“She’s in a final here later this week. She’s been a nice filly for us. We’ve had a couple of really good trotters. Oh So Pine, who I have up in my barn at Mohawk, is another very nice horse we have.”

There is also a 4-year-old bay gelding by the name of Yes, a son of Manofmanymissions, who took his connections on a thrill ride last year.

The bay, bred by Edward Lohmeyer, trotted some monster miles in 2019, including late last June at Northfield.

Yes stopped the teletimer in 1:53.1, setting the current standard for 3-year-old trotters on a half-mile track.

“That was fantastic moment,” said McGinnis, of the 1:53.1 mile last June. “So, we’ve had some nice horses, and they’ve been able to do well at Northfield and other tracks. You always appreciate the opportunity to have that type caliber of horses in your barn. Last year, I think we had four horses in the finals here, and the year before that, we also had four. We haven’t won one yet, but we’ve been knocking on the door.”

McGinnis would like to have those knocks answered in the near future.

“That’s the plan and that’s the goal. Hopefully, we have the luck of the draw, the horses are 100 per cent, and we get the results we’ve been working for. Everyone has been working hard.”

Which makes the recent successes that much sweeter for McGinnis.

There have been, admittedly, a few occasions when he entertained the thought of leaving the sport for good.

Whatever path McGinnis considered starting out on, he always found his way back to the racetrack.

“I explored other opportunities and I just couldn’t pull the trigger. I just always hung on. I probably talked about getting out of it and certainly thought about it, but I just couldn’t. The last few years, doing this with Anthony, has been really good. I operate a barn for him in Canada during the winter. It’s been good. There’s been a lot of nice horses along the way for me, and getting to work for guys like Erv, Tony and Blake – I got to learn from some very talented and successful people, and I was also around some really nice horses. It’s been fun.”

And it’s also been rewarding, especially the past three years.

“If I had a good year, what would that mean? That’s a tough question to answer. I guess it would just mean that we did better than the year before. We’ve done really well, and two years ago, that was my best year in terms of purse earnings. Obviously, we won’t be able to top those numbers in 2020 because of COVID-19, but I think a good year would be that we continued to build on what we achieved the past year, you work harder, and try to win those big ones.

“I also own two Ohio-bred 2-year-olds with a partner, Robyn Philpott. They’re both currently turned out and I’m looking forward to a fall/winter campaign at Mohawk.”

So, what does a trainer, who has led somewhat of a nomadic life, on and off the racetrack, like to do away from the hustle and bustle of horse racing?

Ironically, McGinnis, whose lists Woodbine Mohawk Park as his favorite racetrack, doesn’t like to stray too far from the comforts of home, at least on certain afternoons starting in September.

“I try my best to have Sundays be the day where we’re not racing. I’m a big football fan, so I like to sit down and watch the games.”

“Horse racing takes a lot of dedication and long hours. It can also take you to places you never expected. I’m happy to be part of it. But it is nice when you do get some time to relax. You definitely appreciate those moments.”